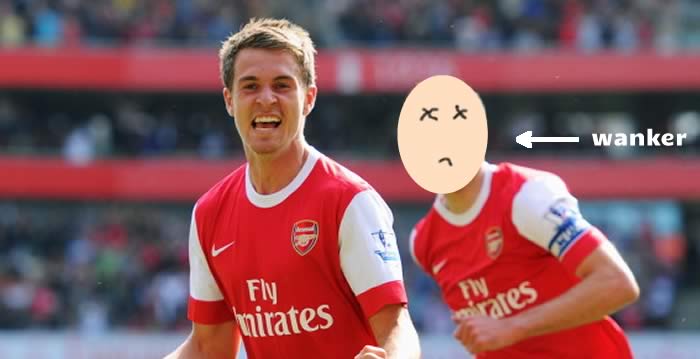 A game for which there has been much anticipation and so much spoken takes on even greater importance after Sp*rs result yesterday against Wigan. I wasn’t expecting them to drop any points at all so their late equaliser wasn’t a heart-breaker really, and it just underlines how crucial it is we get something from today’s game.

United will arrive supremely confident, having wrapped up the title on Monday against Villa, and I don’t expect them to ease off in any way. There might be some measure of rotation but we can’t expect them to go through the motions just because they’ve won it.

From our point of view there are issues with the team, and how we try and add something to our performances to go with the good results. We’ve scraped over the line in a few of the recent games, and when it comes right down to it at this point of the season I don’t really care how we get the points as long as we get them. However, I suspect that today will require us to play better than we have in the last few weeks and the manager’s got to figure out which first XI is going to bring that about.

Does he start Jack Wilshere? On his day a prodigious talent and somebody who will really add some bite to midfield, but clearly hampered by injury lately. Will Tomas Rosicky or Alex Oxlade-Chamberlain be brought in to add some drive and trickery to proceedings? Against Fulham we lacked somebody to have a real go at the opposition, content to keep passing and passing until the balance of the game shifted in their direction in the last 15 minutes.

On this week’s Arsecast, Philippe Auclair suggested that Carl Jenkinson could be used at right back to add something to us in the attacking third. His delivery from the right hand side is far superior to that of Bacary Sagna, but the Frenchman offers more security at the back. In this case I think the manager will plump for experience.

The key issue is who he starts up front. I think it’s got to be Lukas Podolski – provided the injury he’s carrying doesn’t make more than a late cameo an option. On the @arse2mouse podcast they made the very good point that there isn’t really a player in worse form than Theo Walcott at this moment in time. If he were given the nod I think Vidic and Ferdinand would be rubbing their hands together with glee, and I have serious reservations about his ability to play as a striker in this system at the best of times.

It’s difficult to know what the manager will do though. Even bearing in mind Podolski’s injury he hasn’t been played up front since the start of the season, there’d got to be more to Arsene’s reluctance than his ankle knack. But in these circumstances, where the lack of depth in this position is now blindingly obvious, I think it’s the least worst option we have available to us.

I think the key to this will be midfield, and when we last beat United it was an Aaron Ramsey goal which took the points. I think the form of the Welshman, along with the metronomic reliability of Arteta (who I expect United to pressure as they have in recent games against them), and the ability of Santi Cazorla could be the difference. In the absence of a star striker who can turn the game with something special, we’ve got to look to a different area of our team to win the game for us.

The compulsory thing is to keep the attitude and the focus that we have shown in the last 10 games. We need total focus, commitment and willingness. That’s what is requested to achieve what we want to achieve. This is a good test for us. Since we have won at Bayern, the confidence in our team is higher but we have to show, locally, that we have improved. We suffered at Old Trafford so it is a good opportunity to show that we have improved since then.

The defeat at Old Trafford is best remembered for the shirt incident, when the Dutch Skunk threw his ‘mate’ to the lions by handing him the shirt in full of everyone knowing how it would be viewed, but on the day United were much better than us. Cazorla’s late goal added a sheen of respectability to the scoreline that the performance didn’t merit, and if we play like that again today we’ll struggle to get anything from the game at all.

There’s obviously an edge to this game that goes beyond the football, we all know about it but that’s part and parcel of the pantomime. We have to keep focused on the game itself, I think the players understand that and the importance of getting a result today. United have been relentlessly effective this season, but not anywhere close to being invincible, and if we play well enough I’m confident we can take at least a point.

As it’s a Sunday and such a big game I guess most people will be watching, but if you’re out and about, or if you just want to follow the game as you’re watching, we’ll have full live blog coverage as always.  Check back later on for a post with all the info or bookmark the default live blog page.