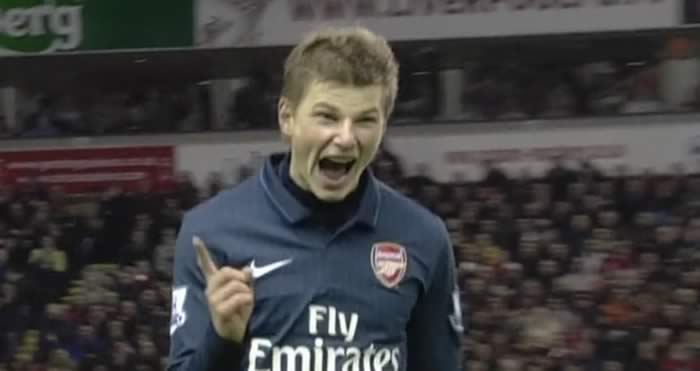 There was an interesting story in the Evening Standard yesterday suggesting that Andrei Arshavin was considering retirement at the end of the season. This morning a Russian paper suggests that it’s not true, but the saddest part of it is that it doesn’t seem that far fetched.

A player that came to us in a blaze of £13m glory, at the end of a ludicrously protracted deadline day (and the day after saga), has started just twice this season and made only 11 appearances since the start of the season. His last game was 15 minutes against Chelsea at Stamford Bridge back in January when the other options on the bench in a game we were chasing were Frimpong, three defenders and a goalkeeper. He hasn’t kicked a ball for us since.

Sometimes he crops up in the training photos, usually having a laugh with his hat on sideways or something, and it’s impossible to escape the conclusion that his heart just isn’t in it. He had the chance to go to Reading on loan or permanently this January, but refused that option knowing his chances of playing for Arsenal were slim. To say it’s gone stale would be a huge understatement.

There are those that accuse Arsene Wenger of ruining his career, but while there are certainly valid criticisms you can level towards the manager, this is not one of them. The only time I can really remember him being played out of position was when he was asked to play centre-forward for a short time. We had some of an injury crisis back then. The Dutch Skunk was having one of his typical periodical absences, while both Bendtner and Eduardo were injured.

Arshavin was asked to play a role not 100% suited to his game, but then many players are asked to do that week in, week out (ask Aaron Ramsey for example, or even Mikel Arteta who has blossomed in an unfamiliar role). He wasn’t a target man, certainly not the ideal candidate for the lone striker role in the formation we use, but he was hardly being asked to play centre-half or full-back. He was a forward being deployed in a forward position.

As he was for the rest of his Arsenal career. Being played as part of a forward three in a team which focuses on the attacking side of the game is not the ruination of any player’s career. It’s where Ronaldo plays for Madrid or, indeed, Messi for Barcelona. To my mind he had the talent to achieve a lot more, where he failed is with application.

I remember watching him closely in a game (possibly against Middlesbrough) a couple of months after he signed. He was intelligent, communicative (especially as it was a young Kieran Gibbs behind him at left back that day – Arshavin talked and pointed and guided him through the game), his movement was excellent and after what we’d seen from him at Anfield and the boost he gave our season after his signing, there was no doubt in my mind we’d signed a really talented footballer.

But talent only gets you so far. How many times have we seen a player blessed with natural ability and skill fail to make the grade? Someone like Jay Emmanuel-Thomas, for example, of whom Arsene Wenger waxed lyrical about his football ability, but who is now playing for Ipswich because he thought his skill was all that mattered. Compare to someone like Ray Parlour who knew that he was never the most technically gifted player (especially when Arsenal signed the likes of Bergkamp, Overmars, Pires, Henry and Vieira), but became important to the team because of his hard work which helped those around him to flourish.

As time went by Arshavin’s skill and ability on the ball wasn’t enough. There were issues with his fitness, his weight (still the only Premier League footballer I’ve seen at Arsenal with love handles – and before you say Andre Santos … ahem), and the writing was on the wall when, last February, with Arsenal involved in an almighty scrap with Sp*rs for the top four, Arsene Wenger decided we could do it without the Russian and packed him off to Zenit on loan.

At the time I was a bit flummoxed by that, but the manager was proved right in the end. We did it without him. Even a successful spell back at his old club wasn’t enough for anyone to take a chance on him last summer. Arsenal tried to move him on, nobody was interested in taking a player whose reputation as one of the most exciting players in the world was left a long way behind.

Ultimately it all comes down to him and his attitude. Has he grown comfortable in London on big wages? Has he lost some, if not all, of his desire for the game? Was he willing to work hard to get back into the team? All of that is speculative (not unreasonably either) unless you can can get into the mind of the player himself, but to me there’s no doubt whatsoever that over the last couple of years Arsenal could have done with a player of his talent and ability.

It might have been too long ago, but he was one of the only players who had the ability to change a game, to produce a bit of skill or a finish that set the opposition reeling (there was a goal away at Liverpool which illustrates that perfectly). And there has to be a very good reason why Arsene Wenger, who loves players with the kind of ability Arshavin has, simply stopped using him. The answer is not where Arshavin was played, or the risible excuses some make for him that suggest he shouldn’t have to track back or work hard (every player has a job to do offensively and defensively, nobody’s that special); the buck stops with the player.

Before anyone accuses me of some kind of character assassination, this is anything but. I’ll admit I like him. I don’t bear him any ill-will, I don’t think he’s an insufferable arsehole like so many footballers, but I do have regrets about the way his time at Arsenal has played out. I think it’s a real shame that someone as gifted as he is allowed himself to slip into such decline.

The man who excited and thrilled, the man who announced himself in English football by scoring four at Anfield, the guy who said ‘I am Goonar’, is now a man who can’t get a game. A man who refused to go elsewhere to play football, content to sit at Arsenal and see out his contract. We’ve moved on, we’ve had to, but unless Arshavin does likewise he might as well call it a day.

But in the end it’s Arsenal for whom our concern should be. We paid a big transfer fee and big wages, and we got nothing close to value for money.

Out of the blue and into the black