On the 36th minute of Arsenal’s 2-1 win over West Bromwich Albion on Saturday, Tomas Rosicky committed a foul. It was his third of the game, a challenge which earned him a yellow card and Mark Lawrenson, pundit for Match of the Day, singled it out as the first time he has seen Rosicky tackle.

This is obviously not true (and all Lawrenson has to do is perform a quick search on YouTube to find a showreel of his greatest moments, which includes passes, dribbles and slide tackles aplenty and this entertaining duel with Cristiano Ronaldo). But Tomas Rosicky has been injured a lot and that has created a lot of myths, some which are true, some which are not. On Saturday, he silenced one of those – his goalscoring – with a brace to get Arsenal the victory.

Indeed, it was only Rosicky’s third goal in 65 matches, a record which should be a lot better given his technique. But despite that, Arsenal and manager Arsene Wenger are under no illusions of his worth to the team. “He’s such an important player who turns the game forward, brings movement into the game, makes a game look simple,” said Wenger. “And you feel when he has the ball that something can always happen. Not many players have that in their locker.

“Before he played too far away from the box. I always played him wide but I put him in a position where he is more central now. He’s more dangerous to score. I said to him ‘today is a really special game for you because you scored two’.”

Certainly, his two goals will get most of the attention, but once again, particularly before the red card, Tomas Rosicky delivered a brilliant all-round performance. Indeed, his importance is highlighted by Mikel Arteta when he says Rosicky has a “change of rhythm in the middle of the park that makes a difference.” That can be displayed by the little things that Rosicky does; his sudden turn of pace, the ability to spin away from markers thus switching the emphasis of the attack and dropping deep to get the ball.

Rosicky actually isn’t involved too much in the build up to his goals, but he’s there in both of them to offer support and suddenly, displays a burst of pace which leaves his markers unable to catch up. That instinct is probably one part of his game which has underwhelmed since joining because, despite his injury record, each time he has featured, he has been crucial to the balance of the team (the first-half of 2007/08 season where Arsenal were only one game unbeaten; since February last season and as it is proving now).

The lack of goals is probably because Rosicky does too much and as such, is unable to get into those positions where he can deliver the final act. But with this system, as displayed against West Brom, with myriad ball players, Rosicky can revel and adds that final balance where otherwise; there may be too many players “who are attracted to the ball.” 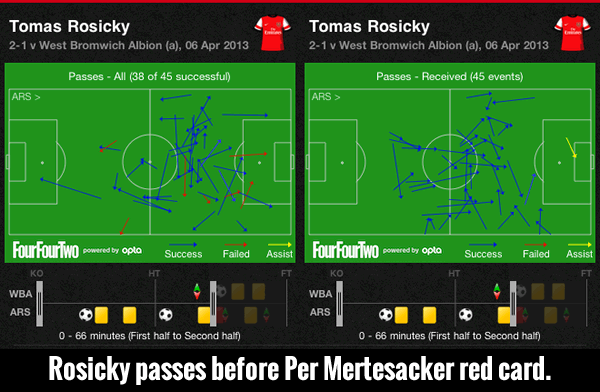 Again, if we go back to the two goals, you’d understand just what I mean. In both, Santi Cazorla is actually the key man at the start, but Rosicky is never too far away. And as such, the two create an overload, allowing a quick switch of play on another part of the pitch. For the first goal, that outlet is Gervinho on the left, who is found brilliantly by Mikel Arteta’s long pass (and make sure you watch the pass again because it looks like it’s going out but inexplicably, the pass is hit with so much backspin that it almost stops dead as it lands) and for the second goal, it’s Aaron Ramsey who is bursting away on the right.

It seems a small thing to highlight but Rosicky’s availability in possession allows players to take up different positions. In the first-half especially, Rosicky dropped deep to let Arteta push forward and then moved wide when Gervnho or Cazorla left their touchline. His special awareness is unparalleled in the squad; better than Cazorla by the benefit of being more disciplined (as Cazorla just likes to roam wherever he feels most dangerous. In that, Tomas Rosicky is the archetypal number 10 in the modern game; not a playmaker as such, although he’s in charge of controlling the rhythm in the final third but a “creative midfielder” as Jonathan Wilson calls it. But even though he created two chances, Rosicky might not even be that. He’s in the middle.

Rosicky can do everything; pass, shoot, dribble and yes, even tackle but he’s not exceptional in any of those aspects in pure statistical terms and as such, he’s importance can be understated. But his understanding of space, and the efficiency of his work – for the most part except for his scoring until now, is rated highly by Wenger. So much so, he has banked on once again, on Tomas Rosicky leading Arsenal’s Champions League push.

Previous articleRecent injuries have helped, not hindered, Arsenal
Next articleSpanish link-up mooted and other stuff