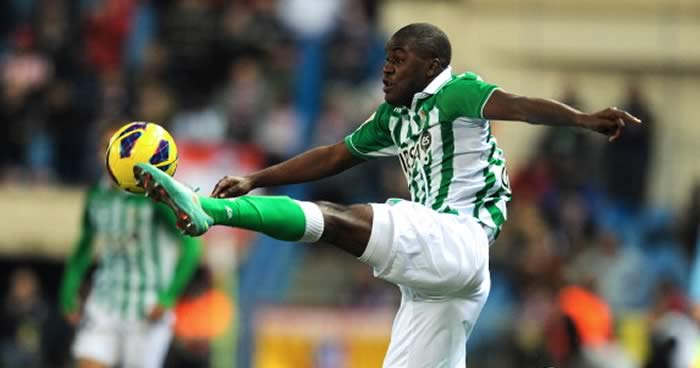 Today’s blog is made slightly difficult by the fact that I, carelessly, sliced off a good chunk of my left index fingernail yesterday, and it’s now a) throbbing and b) wrapped up in a bandage of sorts.

So, idf threre aree any typoos please try to nmake some sense ofd what it iuz I’m saying. Taknhs.

I was going to watch the Manchester derby last night but as the teams were lining up in the tunnel I was faced with the sight of $amir Na£ri hugging the Dutch Skunk. Bleurgh. Here’s a list of things I’d rather see than that.

1 – Anything
2 – Something
3 – My car on fire
4 – “Today’s captain, Marouane Chamakh”
5 – A 27 minute YouTube video of people falling head first and breaking their teeth
6 – My leg on backwards
7 – Matt le Tissier in drag
8 – The inside of Phil Thompson’s nose
9 – What’s in the Arc of the Covenant that makes all the Nazis melt in Indiana Jones
10 – Newspapers reporting that all the Bourbon is gone. Forever.

Well, maybe not the last one, but still. It was enough for any normal person to retch and turn off. So I watched Mad Men instead. Oh, Don Draper, you and your Don Drapery ways. A man with a chin, whose hair is not greying prematurely. He might be an old dog but at least he’s faithful and loyal and … erm … scrap that.

Anyway, United’s loss is, hopefully, the beginning of an unprecedented run of form in which they take 0 points from their final games of the season. The idea of them, and him, securing the title at our place is really quite unthinkable. Yes, perhaps it’s a sorry indication of where we are that I’d be content with a massive goblet of chocolate-legged Schadenfreude, but there you go. I just can’t help it. Every time I see him the first thing that pops into my head is ‘What a cunt.’

I know all the arguments and the reasons and everything else, lord knows they’ve been done to death, but it is what it is. It’s visceral. Unfortunately there’s no way he’s going to be anything other than happy at the end of the season, but that doesn’t mean I can’t hope that the little boy inside of him gets knocked down a car because he wasn’t paying attention to the Green Cross Code.

From an Arsenal point of view it’s pretty quiet. There’s some post West Brom stuff still knocking around with the word ‘massive’ chucked about. While I certainly agree with the sentiments it doesn’t really make for interesting blog fodder. Every point gained at this stage of the season can be so important and, as we’ve said in recent weeks, winning doesn’t prompt anywhere near as much discussion as the alternative.

Interestingly, Wojciech Szczesny played for the U21s last night as they got beaten 3-2 at Anfield, which goes some way to explaining his absence on Saturday. Arsene Wenger tried to give the reason for it but it’s one of those quotes that makes you scratch your head trying to make sense of it:

See? I didn’t see any of that game last night, I have no idea how Szczesny played, but hopefully he’s done enough to convince Arsene Wenger to make less confusion statements about his motives for picking a reserve goalkeeper. Surely, if you were manager, you’d simply choose your currently second best keeper in case anything happened to the first one. Anyway, I’m giving up trying to make sense of it.

Elsewhere, reports in Spain suggest that Arsenal could be in the process of arranging a formal link with Real Betis, which would allow the Spanish club to take their pick of young talent at the club to take on loan. Joel Campbell is already out there, and they want to keep him for another season.

Apparently their manager a club president are coming to London to discuss Campbell and more, and Arsenal will furnish them with a list of players who could continue their development in La Liga. When you look at the current crop bubbling under, you could make a case for Eisfeld, Gnabry, Bellerin, Miyaichi and maybe even someone like Akpom to go and play semi-regularly somewhere, allowing Arsenal to monitor their progress and make decisions about their future with us. We shall see how it all goes.

Not a lot else happening, so I’d better go change this bandage thing. I suspect it’s all stuck to the bit that wouldn’t stop bleeding yesterday and will smart when removed. Joy.

You say you want a revolution? Well…