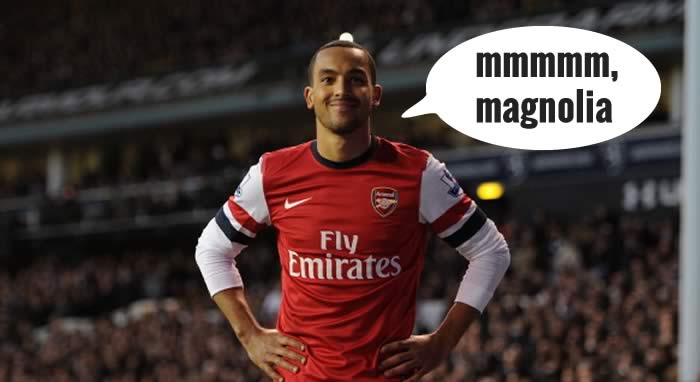 Hello everyone and welcome to midweek. The evenings are getting longer, shame it’s still as cold as … er … I was gonna say hell, but that doesn’t really work.

Unless hell is modified for each person so, for example, someone that really doesn’t like the cold finds their own hell is a freezing place where people with icy hands leap out from behind trees and plant them in the small of your back. Or people who don’t like dogs go to a place filled with terriers and mutts of all kind. Or John Terry’s infernal damnation takes place on a slippy football pitch where everyone in the crowd is Anton Ferdinand.

There was a bit of Champions League on last night. I dabbled with it. I have to say while I’m not a fan of the bloke at all, and his new hairstyle makes him look a bit too Abel Xavier, Dani Alves’s pass for Messi’s opener against PSG was really something else. With the outside of the boot … ooof, I’d say Rosicky nearly came if he was watching that. Fond as he is of the outside of the boot action.

It all ended quite dramatically too, a late Barcelona penalty followed by a PSG equaliser which initially looked like a bit of a howler from Valdes but I didn’t notice the deflection. He’s been linked with a summer move to us in recent weeks but I remain unconvinced by him. Still, if we can sign Sylvester then nothing can be ruled out. Nothing.

Back in the Arsenal world and there’s not much going on. Theo Walcott has been talking about how he’d swap all his Arsenal appearances for a trophy. I don’t think he’s alone there. He went on to talk about his contribution to the team this season, saying:

This season has been my best goalscoring and assist-making season. I can see why people may think that now. That’s been the biggest step for me.

The assists are something I’m very proud of. A lot of those come from the wing as well. An assist is just as important as getting a goal.

Leaving aside the part about how he can see that ‘now’, as if someone sat him down and explained it to him, Theo’s season can be broken up into two sections. While I haven’t been able to find the assist stats (I wish somebody would list them on their stats pages on a game by game basis), he scored 14 goals before he signed his new contract, he’s scored 4 since.

A player content with a new deal or just coincidence? I think it’s the latter. It’s a decent conspiracy theory to suggest a player will score goal after goal just to get a new deal, then when it’s signed think ‘Job done! I no longer have to score goals because I’m rich, rich I tell ya!’, but perhaps there’s something subconscious about it. He went from a player who, at the start of the season, found himself close to redundant, to one who, all of a sudden, was our most important.

I think there was probably an element of proving a point but, more than else, anything I think he just went one of those consistent patches he has. Now he’s out of that patch and into the kind of patch which creates all the doubts people have about him. His form, like many players, fluctuates, but Walcott doesn’t really do the middle ground. He’s either exciting and everything comes off for him (goals and assists) or he’s bang average or worse (poor control and clumping the ball away with his first touch).

What would be very handy for us is if he could find another one of those patches between now and the end of the season. Maybe the threat of losing his place to the in-form Ivorian might shake him back into life. Another four or five goals before this campaign ends would give him very respectable figures and he’s hardly alone in going through a patch where they’re hard to come by. Giroud has scored a couple recently but went 6 or 7 games without, and there’s a certain greying, treacherous, Quisling gleet-hound in Manchester who’s having a dry patch at the moment too, so let’s hope Theo can get going again.

Elsewhere there’s good news for Denilson fans, he could be coming back! Sau Paulo no longer want him because Arsenal are asking too much and he had a run in with a fan and blah blah blah. The reality is, like so many of the others, he’s had his time at Arsenal and this summer, more than any other, the club have to cut their losses and make sure that these guys find new clubs. If we have to fill their pockets with gold and delicious sandwiches cut into triangles to make them leave then that’s what we need to do.

And on that, here’s a piece I wrote for ESPN about the players out on loan and their chances of an Arsenal future.

Finally for today, if you use the Android app to read the site, please have a read of this.

Right, that will have to do. Back tomorrow as we start to prepare for the game against West Brom on Saturday.