On Podolski and Giroud

Welcome to a brand new week and there’s some interesting stuff from the manager regarding a couple of his forwards to get us going.

Lukas Podolski came off the bench to have a big impact on Saturday, but there’s been plenty of chatter about him and his future. He’s been sidelined, somewhat, through injury and the form of others, but Arsene Wenger doesn’t talk like a man who is willing to write off a player he paid £12m for just a year ago. He says:

Podolski was injured when we played at Bayern and won. After that, we won at Swansea … sometimes you have periods like that and I think he can play as a central striker as well. I work a lot with him as a central striker at the moment. He is a quality player and when he comes on you can see that straight away. You don’t get 100 caps by luck. Honestly he has a great attitude. He never moans, he never has a bad phase, he is always positive.

While he’s never going to publicly berate a player, I think Podolski has been a victim of circumstance, and maybe the fact he never moans makes it easy for him to be the guy who’s left on the bench or the one hauled off when we need to make a substitution. For my sins, I was watching Sky Sports on Saturday, they had an interview with Podolski, and afterwards, Jeff Stelling’s first question was ‘Has he been a mistake?’

Stelling, of course, is much more interested in a) being a TV troll and b) making his line-up of cronies laugh than presenting a show for the benefit of the people actually watching it, but if 14 goals in a debut season in England is a mistake then I wish Arsene Wenger would make more of them. Chamakh, that’s a mistake. Park, that’s a mistake. Podolski? No. Maybe he hasn’t done as much as people expected, and maybe there’s a reason beyond placidity that sees him taken off far more often than he completes 90 minutes, but I think his contribution has been largely positive.

It’s interesting too that Arsene talks about him as a central striker, especially as he’s rarely played him there. All of his Premier League goals have come from very central positions (as the graphic shows), so he’s probably most effective there, but he probably lacks the hold-up play to be deployed there on a regular basis. 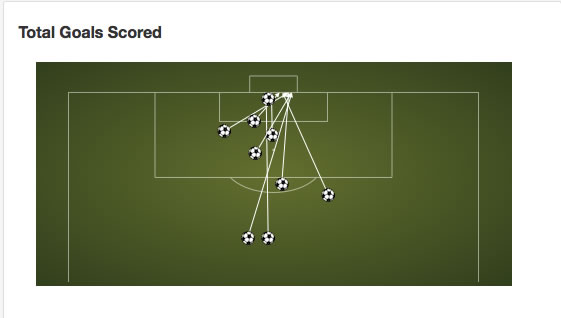 If there are questions about his future it strikes me that they’re probably more to do with the fact that the Arsenal garden is a much rosier place than it was a few weeks ago and there’s always a need for a story. His absence from the team coincided with an upturn in our fortunes and better form from Gervinho. The manager has left his captain on the bench for weeks, dropped his number 1 goalkeeper for a guy who’s out of contract this summer, and been reluctant to change a winning team.

That’s conspired against Podolski too, as he’s found it difficult to get back into the team, but having been asked to come on and help save the game on Saturday, that’s exactly what he did. You can’t ask for more than a player reminding the manager of his ability and it’ll certainly give Arsene Wenger something to think about when he’s selecting the team for tomorrow night’s game against Everton.

As for Olivier Giroud, Arsene said of his performance on Saturday:

It’s quite unusual for him to be so critical, and given that two fairly decent chances fell to Giroud in the first half it seems a little odd to me, but I guess managers often see things differently than we do. I like the Frenchman’s link-up play, in an around the box he’s very good at bringing others into the game – see his chest down for the Podolski effort which hit the bar as a good example.

I’d like to see a bit more aggression from him, at times, but like Podolski I think he’s been positive for the most part. Assuming the goal on Saturday is given to him, and he insists it’s his, then that’s 17 for the season. With a few games still to go that’s a decent return.

I’m very much of the opinion that we could do with a bit more up front, and I’d hope this summer we add to the squad in that department, but a total of 31 goals from the two men brought in to replace a 30 goal a season striker means they’ve done pretty much what’s asked of them. Can they do better? I think they can, and I expect a few more goals between now and the end of the season which will hopefully drive us into a top four finish, but to my mind these two guys are the verging on the least of our problems.

Right, plenty of stuff to come ahead of the Everton game tomorrow. News throughout the day on Arseblog News, and a full preview of that game tomorrow.