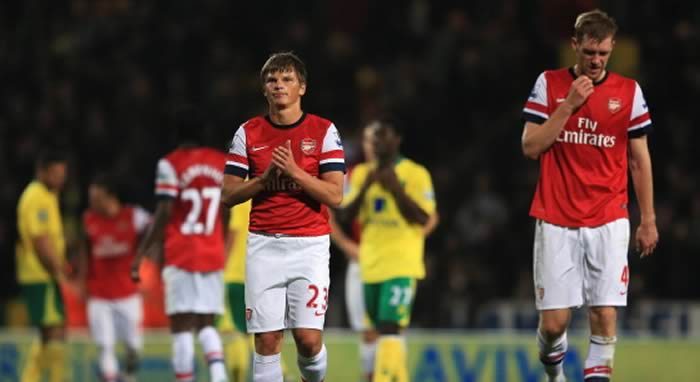 The build-up to today’s game may have been quite muted, but that doesn’t lessen the importance of it one bit.

With a tricky midweek fixture lurking on the horizon, it’s crucial we take three points today, and exact some revenge against a team that beat us earlier in the season. We were pretty hopeless at Carrow Road, reduced to throwing on Serge Gnabry to try something to change how flat we were, but I think we’re in better shape going into this one.

In terms of the team the manager has a decision to make about how to replace Tomas Rosicky if the Czech doesn’t make it. He said yesterday he was hopeful he’d overcome a hamstring issue, but if not there are two options as far as I can see.

One – he slots Jack Wilshere into the midfield, leaving Cazorla in that role on the left hand side. And it’s one which has suited the Spaniard quite well.

Two – He brings Cazorla back into midfield as the attacking member of the trio (I think he’ll stick with Ramsey and Arteta), then picks either Walcott or Podolski. If the former, Gervinho will move to the left hand side of the attack, the latter would see the German start there for the first time in the Premier League since Liverpool on Jan 31st.

Whichever he chooses they look good options to me. It’s not as if he’s being forced to mix and match or play players out of position to fill a gap, they’re guys who should be able to come back into the team and contribute straight away. There’s a certain amount of cohesion in the team at the moment, none of these changes – on paper at least – should damage that in any way.

At the back Thomas Vermaelen will come back in for Per Mertesacker, hopefully more focused and determined, as well as ready to play with the discipline that’s been obvious since that loss against Bayern. The team’s attitude to defending has changed, it seems more sensible and cautious, which doesn’t necessarily sit with a player who can be somewhat gung-ho in style; but the reality is that unless he adapts he’ll find himself back on the bench as soon as the German returns from suspension.

There’s not a great deal to say about how we approach it. We’ve won 6 of our last 7 Premier League games, we look confident, assured and like a team that’s finally finding some consistency. Yet one of the biggest problems Arsenal have had in recent seasons is going on runs like that and relaxing. I’m sure it’s subconscious, but at this level if you let your standards drop just a little bit, you’ll be exposed.

Remember last season, having won 6 in a row, we went to QPR, we let ourselves think we were the greatest thing since sliced bread, a couple of runs weren’t tracked and we ended up losing 2-1. This game has the potential to be that kind of banana skin if we let it. I hope that lessons have been learned but you can never really tell. All it takes is for one moment, one player to do something silly, and momentum can change – as we saw so clearly at West Brom last weekend.

However, if we approach it with the same intensity we have done all the other recent fixtures, then I think there’s more than enough in this team to take the three points. We have a squad that’s come together, fringe players are contributing when the big guys aren’t, we look good in front of goal and relatively safe at the back, so all going well I’d like to think we’ll be pleased with ourselves come the final whistle.

With Chelsea and Sp*rs not playing this weekend, we have a chance to get points on the board and to put pressure on. Arsene Wenger says:

It is our chance and we want to take it. They don’t play so we have a chance to build an advantage. But for four or five weeks ago we have known we have to win our games whether they play or not.

We are hugely determined and, of course, there’s a target for our two games now. But let’s start by being completely pragmatic, just focus on the first one and continue to play the way we have played recently.

And for me that’s key. Just keep doing our thing, and if we do it successfully, we make their lives more difficult.

As always we’ll have live blog coverage of the game, starting with team news as soon as we get it, then up to the second live updates. Check back later on for a post with all the info or bookmark the default live blog page

Time for some breakfast, catch you all later for the game.