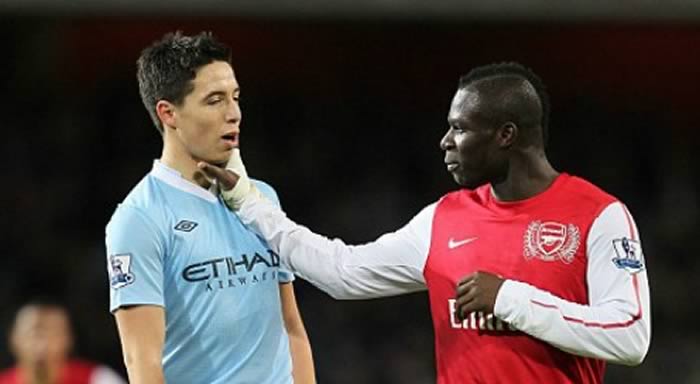 The fact that we won on Saturday means that the headlines and the drama has to exist somewhere else. There’s not much you can do with a 4-1 win if you’re looking to create a bit of hysteria.

Still, isn’t it nice that our old friend $amir Na£ri has brought us some by speaking about his Arsenal situation on French TV. I should point out that I am past caring, but it’s hardly a massive revelation to say he was sold for the money. The suggestion that the sale was forced by Kroenke seems a bit off to me too. While I’m not a huge fan of Stan what else should Arsenal have done with a player who spent all summer hawking himself around Europe’s clubs having steadfastly refused to sign a new contract?

‘Ah sure see out your current deal, Sammy, and leave on a free so we can get nothing. That’s the best thing for everyone. Would you like a free spaceship to see yourself out with. Go on. And have one of my kidneys too, just in case.’

It all sounds a bit revisionist to me:

‘Arsene is nice, Stan is evil, nothing’s my fault you know. I didn’t ignore Arsenal’s attempts to offer me a new deal. I didn’t target Manchester United, oh no. And when it looked like the City deal was dead in the water I certainly didn’t get in touch with cash rich PSG to see if they’d want me.’

I realise a lot goes on behind the scenes with footballers and contracts that we can only speculate about, but Nasri’s revelation that he was sold for the money is as enlightening as me telling you today is Tuesday. His refusal to acknowledge that it was his behaviour that left Arsenal in a position where they had to make that decision is the elephant in the room.

None of which should be construed as a defence of Arsenal’s transfer policy, the departures of top players before their time has been a painful and destructive thing to watch, but then I don’t think Nasri was ever a top player. He certainly doesn’t come close to the Skunk or Cesc, for example. A purple patch in the first part of the season after which he was sold gave him ideas above his station, and others the false impression that he was somebody who could perform at a high level on a consistent basis.

This season, for example, he’s played 6 more games than Gervinho in all competitions, and scored 4 goals fewer. In this Arsenal team Walcott, Cazorla, Giroud and Arteta have all scored more. Nasri has scored as many as Laurent Koscielny, and just one more than Marouane Chamakh. So while there’s definitely an issue with how we let certain players go, I don’t think there is one with this bloke. We got £24m for the French David Bentley, that’s good going by any standards.

Meanwhile, Aaron Ramsey talks about how the team have changed their approach in recent weeks, gone is the slow starting and, heaven forbid, the dreaded handbrake is off:

In the past, we’ve been accused of starting slowly and I think that’s something we’ve changed, especially in the last month. I think you could see that we played without any hesitation and with the handbrake off.

His master’s voice, right there, but I suppose he has something of a point. Early goals against Bayern and Reading were nice, but let’s not ignore the fact it took us until the 74th minute to score against Swansea. All the same, that showed us another good side to the game, staying compact and disciplined until we did find an opening.

This season, perhaps more than any other, Arsene has spoken about the team being nervous, especially at home, so it’s good to see that is a thing of the past. Despite the loss to Sp*rs it’s 5 wins from 6 in the Premier League, a very good win away from home in the Champions League (despite it not being quite enough), and there’s no reason why these players shouldn’t be building confidence from game to game. We’ll have to wait and see if it’s going to be enough but if this is a run we can keep going between now and the end of the season then it’ll be a very nicely timed one.

Bonus reading this morning: The Tactics Column looks at Gervinho’s performance against Reading, and make sure to give @ArsenalColumn a follow on Twitter.

Right, that’s that for this morning, back tomorrow. News throughout the day on Arseblog News (which you can follow on Twitter here). And remember, you can say hello and leave a comment in the ‘arses’ (see above).