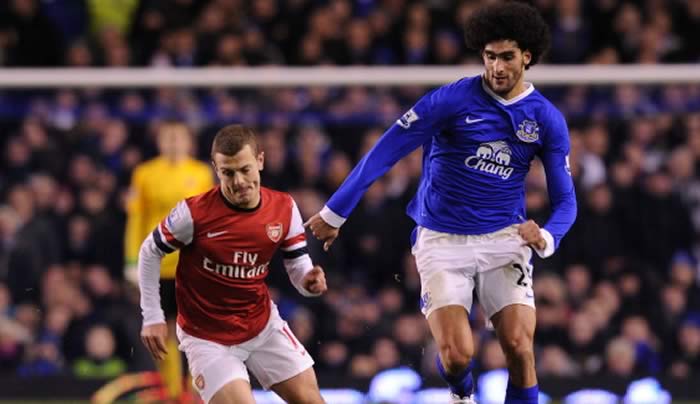 After a period in which we’ve had to wait a full week between games, it seems something of a novelty to have midweek football.

Everton come to town in what’s, on paper at least, our most tricky fixture of the remaining 6 aside from the visit of Manchester United. The Toffees come with genuine aspirations of Champions League football themselves. They’re just 3 points behind Chelsea and Sp*rs and 4 behind us, and to have any chance of scoffing from Europe’s top table next season they need three points tonight.

While they’ve always been difficult opponents, I think it would be fair to say they haven’t always come to our place needing to win. We’ve often seen Moyes set out his side to frustrate, rather than going for the victory, but tonight they’ll have to be more expansive. And, in fairness, they’ve got the players and the form to do that. At the very least it should make for an expansive game of football as three points are on our menu too.

From our point of view there are some decisions to be made with the team. Lukasz Fabianski is a ‘major doubt’ having picked up a kick in ribs against Norwich (those behind the scenes tell me it was his spare rib and smelt faintly of sweet and sour sauce so I suspect our portly chum was at fault), so Wojciech Szczesny could return to action having not played since the defeat to Sp*rs at White Hart Lane. That’s almost 6 weeks now, but when you consider Fabianski didn’t play for a full year before being thrust back into action it’s not a big deal.

He worked very hard and worked very well. I do not want to make a case of it before the game. He’s handling the situation very well and in a positive way.

The elder of the Poles has done well but injury could open the door and the manager will be looking for a reaction from the younger. Dropping him, so unceremoniously, has worked out ok. Fabianski has played well, but Wenger will be hoping that Szczesny is refocused and hungry to reclaim his spot in the team. A short, sharp shock might be just the thing a player of his ages needs and the competition for his place a reminder that he’s not the finished article by any means.

With Per Mertesacker available again after suspension there’s also a decision to be made there. If it were me I’d be sticking Vermaelen back on the bench and bringing the German straight back into the side. The captain didn’t do much wrong against Norwich but, at the moment, I think the best pairing we have there is Mertesacker and Koscielny and that ought to continue.

Tomas Rosicky is also fit again, and there’s a good case to be made for him coming back into the side in place of Jack Wilshere who looked off the pace on Saturday. Arsene Wenger admitted it was a little bit of a risk bringing him back against Norwich but there isn’t a manager out there who, at this stage of the season, doesn’t take a risk or two with players he really needs. What it showed us though is that he might be better off using his squad until Jack is a bit sharper.

Rosicky can come in and do a job, and he could always move Cazorla back into the midfield with genuine options for the front three. Podolski is fit again and after a good goal last weekend must be itching to start. Kicking off with Walcott too must be in his mind, but we’ve only started with a front three of Podolski, Giroud and Walcott four times in all competitions this season. I know there are various reasons for that, but it’s still amazing to think they’ve lined-up together from the start so rarely.

Gervinho and Alex Oxlade-Chamberlain have both contributed well in recent weeks so there’s some assurance that, should we need to change something late in the game, we’ve got options from the bench if the three big guns start. Anyway, it’s interesting that the team is as fluid as it is. At this point it’s usually really easy to pick the first XI, now it’s not so obvious and that’s a good thing, in my opinion.

As for the game itself, it’s going to be tough. Everton will work hard as they always do, and they have some dangerous players, but I’m positive that if we keep this momentum going we can take three points. Norwich was something of a reminder that all the games at this stage of the season are really tough. We could have dropped points but did enough to take all three in the end. Our performance tonight will have to be better to win against Everton, a win will put us four clear of the chasing pack, and this late in the day it’s all about getting the points under our belt. Fingers crossed we can really pile the pressure on.

As always we’ll have live blog coverage of the game, starting with team news as soon as we get it, then up to the second live updates. Check back later on for a post with all the info or bookmark the default live blog page.

Right, that’s that, here’s to three points later on, by hook or by crook, it matters not. Come on you reds.