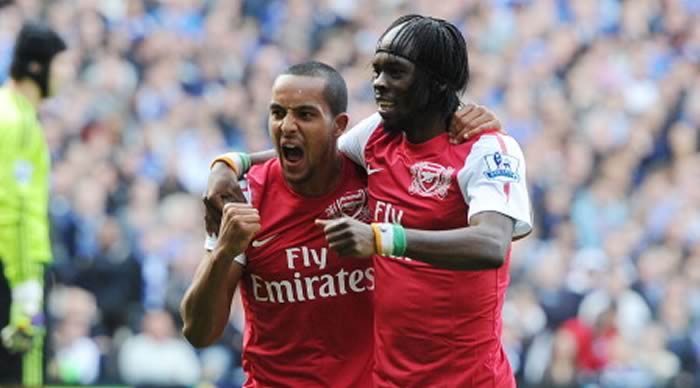 There was a bit of midweek Champions League stuff to keep us ticking over last night. I watched Barcelona against PSG. Not a hugely exciting game, really, the French side were quite good in fairness, although just as good as you’d expect a team that has spent a billion million squillion to be.

Barcelona didn’t look as good without Messi – understandably so – and in the end it came down to who had the most objectionable looking face. That was Zlatan. If he wasn’t so big and strong and all that it’s a face that says ‘Punch me’. You know me though, I’m not the violent type. It sets up some interesting semi-finals and, if it plays out right, the possibility of a Barça – Real final.

Personally, I have a hankering for a Dortmund win. I love their manager, he’s hilarious and a bit scary – like a snarling dog in a Batman costume. He’s also somebody who, when Arsene does the leave the club, should be very, very close to the top of any shortlist we put together. If he’s not already.

As for the Champions League, all the other clubs have all had their moments in this competition. Real have won in more than anyone, Barcelona have won it twice recently, and after letting both Man United and Chelsea win it in ludicrous circumstances, no right mind person should want Bayern to go all the way this season.

I know Dortmund won it back in 97 (?) but that leaves the team that Klopp built with exciting young players like Götze and Reus and Lewandowski, and they also have Bender which makes me think of Futurama and how it would be GOOD NEWS EVERYBODY! if they won the Champions League. Plus they do stuff like this which is just amazing. Go Dortmund.

Back in the world of Arsenal, well, it’s still pretty quiet. The preparations for Norwich on Saturday will have begun in earnest and in terms of early team news there’s the suggestion Jack Wilshere will be back while Theo Walcott has declared himself fit and available for selection. Here’s the thing though, would you bring him back into the side?

When our options were limited – admittedly made more so by the fact that Gervinho went through a run where he played like a club-footed mule – you wouldn’t have to think twice. Walcott was the leading scorer (still is, in fairness), but he was scoring with decent regularity and contributing on a consistent basis. Now, however, it’s not so simple.

Walcott hasn’t scored a goal since Jan 31st and although some of that has to go down to the fact he’s been injured for the last couple of weeks, it’s still not exactly the kind of thing that begs for an instant recall. In the meantime Gervinho has found a bit of form. Two goals and two assists in the last two games means it’d be a strange decision to drop him, especially when the manager says he’s a player who thrives on confidence. I think, given what we’ve seen of the Ivorian, that his confidence is a brittle thing at the best of times, so it’d surely be self-defeating to damage it unnecessarily.

It means that Walcott can be used from the bench and when you consider how the season started – with Theo there and with something to prove – I don’t think it’s a bad idea to keep him there. Yes, he’s signed a new contract, yes, he’s now the highest paid player at the club, but when other players play well and take their chances they deserve to stay in the side and it’s up to others to fight and win their place back.

I remain unconvinced about Gervinho’s long-term prospects, to be honest. I’m glad he’s scoring and making assists but it’d be fair to say his career has been more miss than hit. All the same, the discussion about whether or not he meant to cross for Rosicky, or if it were a shot, shows how we tend to over-analyse things. Quite often an assist comes about because a player just lumps a ball into a dangerous area and hopes one of his teammates is on the end of it.

To me there’s a big difference between a speculative cross from the right or left and a perfectly weighted through ball which sends an attacker through on goal. I think that’s fairly obvious, but stats show assists assists assists and half the time they’re not really as deliberate as we’d like to think. Anyway, I digress. For Saturday I think Gervinho should start, if he plays well he stays on, if we need something else we have a fairly direct replacement and may the best man keep his place.

Not a lot else happening so we’ll leave it there. Back tomorrow with an Arsecast and all the usual pre-game waffle. Till then.