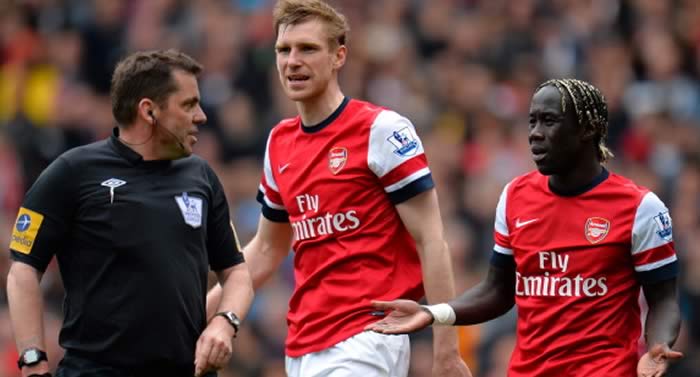 In the end, although there was frustration, I think a draw was a fair result given the performances of both sides. From our point of view it probably feels worse than it actually was because of the manner of their goal.

Bacary Sagna’s season has been poor by his own standards. The under-hit pass was one thing, the rush of blood trying to win the ball back another and he quite successfully did to van Persie what most of us would like to do anywhere except in the penalty area. I don’t think he was ever going to miss, his penalties are usually well taken at this one was no exception. Szczesny went the right way but had no chance.

The sense that we’d let something slip came off the back of an excellent first half an hour which saw us take an early lead through an offside Theo Walcott (not complaining!), and the kind of intensity and commitment to our performance from which only good things can come. Aaron Ramsey and Tomas Rosicky, in particular, stood out as they made life difficult for United high up the pitch, worked hard to get back when they did come forward, and got stuck in when necessary.

Clearly the need for points, coupled with the extra edge to this performance because of his return, had Arsenal fired up. At one point Nani found space for a shot on the edge of our box, two Arsenal men threw themselves in front of it to block it, and Kieran Gibbs made sure the 50-50 from the rebound in midfield went our way. This wasn’t the passive Arsenal we’ve seen in other big games this season, the extra spice was a factor, I’m sure, but after seeing Sp*rs drop points yesterday and knowing Chelsea were likely to win at Swansea, we looked like a team that wanted to take any advantage possible.

Yet, for all the guts and wholeheartedness, it’s impossible to ignore the fact that United had chances in that first period too. Phil Jones headed wide with Szczesny rooted to the spot, van Persie stuck a point blank header into the keeper’s face and Jones again contrived to miss with a low header from around 6 yards out. So, even if their goal was ultimately avoidable, it’s not as if there weren’t warning signs.

And as the game went on, our intensity faded, United looked more likely to score, finding space time and again down our left hand side but, thankfully, the quality of their final ball was below par. Crosses were hit straight out for goal kicks or throw ins, and I suspect it probably had something to do with the fact they were already champions. I’m sure it was subconscious more than anything, and I don’t doubt they wanted to win the game, but having already wrapped up the title it lent itself to some complacency in our final third.

Which is a good thing, because up the other end we struggled. Santi Cazorla looked the most likely to score for us, testing de Gea in each half with rockets from distance, while Tomas Rosicky almost scored the most Tomas Rosicky goal of all time, curling a shot wide with the outside of his right foot. Other than that, however, we struggled to create any real openings. Lukas Podolski had a difficult time up top, lack of form/sharpness/fitness coupled with a basic unsuitability for the role he was asked to play meant he found it hard, while after the goal (well taken as it was) Theo Walcott faded out of the game.

Santi Cazorla is picked on the left hand side of the attack but plays very much a free role, which is not a bad thing in itself but at times leaves our attack a bit lopsided and, as United’s breaks down our left showed, a bit understaffed defensively. The substitutions didn’t do much to change the game or the momentum, even though we finished the 90 minutes quite well. Wilshere for Rosicky seemed obvious enough, bearing in mind there was a fitness issue with the Czech; Gervinho was just as effective as Podolski, while I was surprised to see Ramsey removed but having run himself into the ground I can understand why it happened.

United could have won it late on, Oxlade-Chamberlain’s knee to Giggs shot after they caught us on the break saved it from being a much more unpleasant final score, but even bearing in mind our part in their goal I don’t think we can complain about the final score too greatly. Afterwards, Arsene said of the race for the top four:

I am convinced we will be there but there is no room for dropping points. But the other teams are in the same position. Overall I can only praise the players for the effort, the dynamic and the desire we put in. Let’s keep it going like that and we will have a chance to be where we want to be.

It leaves us with no margin for error but considering the fixtures the others have then I don’t think it’s unreasonable to expect them to drop some points. Overall, I think yesterday showed once and for all how the lack of options for central striker affects the team and our efficiency in the final third. Without a natural replacement/competitor for Giroud’s position (by default), we’re blunted somewhat as an attacking force. We’ve got plenty of players who can play either side of the main man, but nobody whatsoever who can do the job properly in his absence.

It’s not like this is a new revelation or anything, it’s something we’ve discussed all season long, but it’s got to be top priority this summer. In the meantime we’ve got to find a way to win the next two games, before Giroud returns for the trip to Newcastle on the final day.

And finally, a word for Bacary Sagna. It was an awful passage of play which gave them the penalty, and he was lucky to escape a second yellow for a slide on Evra later in the game, but let’s not forget this is a guy who, over the last few seasons, has been one of the only players in this Arsenal team to show any kind of consistency. It’s possible to be frustrated and critical of his performance without resorting to abuse.

For me it’s just sad to see somebody who has been so good for us struggle so badly this season. There’s no doubt the two broken legs (think on that before you call him names) have taken their toll, and if the whispers are correct this is likely to be his final season with us, but he doesn’t deserve the vitriol. I think the manager has something of a decision to make for the next few games, and I don’t think it’s unreasonable to give serious consideration to bringing Jenkinson back into the team, but the idea that any failure to finish top four this season is down to Sagna’s mistake yesterday is short-sighted beyond belief.