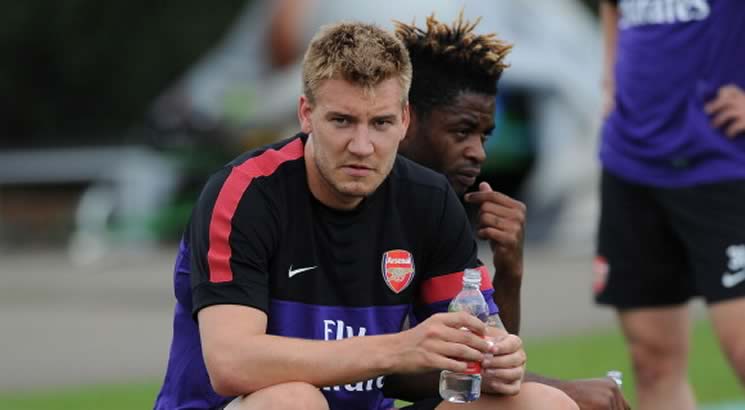 So Arsenal remain the only English team in Europe after Manchester United’s exit at the hands of Real Madrid last night.

Funny how it happens, eh? One moment you’re going along doing your business, the next the referee sends off one of your players for nothing. Well, that’s how it happened to us. However, I don’t think Nani can have any complaints after his heinous flying kung-fu kick on Arbeloa.

HE COULD HAVE KILLED HIM!

When you consider van Persie could have been sent off later on for a vicious, premeditated, cold-blooded, dead-eyed shoulder charge on the keeper I think United can count themselves lucky they weren’t beaten by a cricket score. Apparently Ferguson was ‘too distraught’ to face the media afterwards. The poor lamb. You’d think he’d have been used to refereeing injustices by now, given how often he’s seen them happen to other teams at Old Trafford.

Still, we’ll continue to fly the flag for the Premier League in Europe, and when we turn around that deficit at the Allianz Arena, Carl Jenkinson’s quadruple saving the day, we shall serve out delicious helpings of Humble Pie to all and sundry. Please note: it is not recommended you wager any money on this outcome, even someone else’s.

Meanwhile, The Greatest Striker That Ever Lived has found himself in hot water over the last few days after being convicted of drink driving back in Denmark. He drove the wrong way up a one-way street in Copenhagen with a blood alcohol level of ‘George Best’. He’s been banned from driving for 3 years, fined the equivalent of a couple of weeks wages, and suspended by the Danish national team for 6 months.

Now there’s talk that Juventus, the club he’s ‘on loan’ with until the end of the season, are exploring the possibility of cancelling the deal and sending him back to Arsenal. I’m unsure as to whether or not they can do that. Although his behaviour is poor, I’m not sure that in itself gives them grounds to do it, but even so you wouldn’t blame them for trying.

There’s absolutely no justification for driving while drunk, and when you’re a highly paid footballer who can afford taxis, limos, chauffeurs, town car, pony and cart, or any other form of transport then it’s impossible to have any sympathy for him at all. If you want to go out and get pissed that’s one thing, but just chuck a few quid at somebody to drive you around town while you do it.

Of course there’s the whole going out and getting pissed thing too. For you and I it’s not really that much of a big deal, but a professional sportsman who is recovering from a big injury? There’s a time and a place, and this was definitely not it. I’m not going to get holier-than-thou about anyone having a drink, but if you’re serious about your football career then your behaviour should reflect that. We all need to blow off a little steam but this is hardly an isolated incident.

He’s been done for speeding, he was involved in a few incidents up in Sunderland when on loan there; one of which apparently involved him and Lee Cattermole running over the roofs of cars, and he’s a guy with talent who is in real danger of wasting his career. It didn’t work out at Arsenal for a number of reasons. He can feel somewhat aggrieved that he didn’t get more chances down the middle – his best form in an Arsenal shirt came when the Dutch Skunk was out with one of his myriad injuries and he had a run as the central striker.

A right sided forward he certainly was not and I don’t blame him for not enjoying it out there. The arrival of Chamakh, the Moroccan’s decent impression of a footballer for 4 or 5 months and an injury meant he fell down the pecking order, especially when old Skunky returned plastered with horse placenta and feet that could do little wrong, and his unhappiness grew. He spoke about leaving, but the sad fact was that nobody really wanted him, or he felt the clubs that did weren’t good enough.

There was a deadline day move to Sunderland, surely a last ditch thing when all other options had been exhausted, and although he finished top scorer there that season with a whopping 8, it was a move which saw him start to make headlines more for his off-field activities than on. He came back to Arsenal and again the whole summer passed by without anything happening – this even after he caught the eye a bit at the European Championships with some good goals and advertising laden underpants.

In the end it was a last minute, deadline day loan again, this time to Juventus. A big, big club and a great chance for him to show his worth. He suffered a serious injury, an abdominal/groin tear which required surgery and has ruled him out of action since December. He spoke about how he was going to work really hard to come back as quickly as possible. He’ll have to go a long way to convince anyone that driving bladdered the wrong way up a one-way street is part of a dedicated rehabilitation programme.

As I said, I’ve got little sympathy for his driving woes, and while he can count himself slightly unfortunate that a few footballing things didn’t go his way, I’ve got no sympathy for that either. These guys exist in a world of their own, with no idea how lucky and privileged they are. If something goes wrong in your football career, just shut the fuck up, get your head down and get on with it. That’s what the rest of us have to do. You’re not so special, just because you can kick a ball better than most people.

I realise I might be slightly in the minority when I say I think he’s a more talented footballer than people give him credit for, but 43 Arsenal goals in 72 starts is not a bad record. He had his flaws, his miss in the Camp Nou was a real make or break moment, and sadly for us (and him) he fluffed it. Since then his career has been on a downward spiral and unless he wakes up and realises he’s pissing it away it will only get worse.

He’s a product of the modern game, a guy who had it all way too soon, and who has allowed ego and lifestyle to get in the way of what is a very short career. Maybe this whole thing will be a wake-up call for him. It’s done and dusted for him at Arsenal, no question, and he needs to lower his sights if he wants to play football regularly. He doesn’t merit a place at a Champions League club. If he wants to get back there he’s going to have work really hard for it.

And given what we’ve seen from him, I’d put about as much money on that happening as the Carl Jenkinson quadruple.