Tactics Column: Arsenal fall into the same traps against Spurs

They won’t be used to being underdogs in the North London Derby but at the end of the game, there was a sad familiarity about the way Arsenal were defeated by Tottenham Hotspur. Against three out of the current top four have Arsenal now been defeated 2-1 away from home, the exception being the 1-1 draw with Manchester City. Unfortunately though, they played better in this defeat than the others but once again, they gave a sorry reminder of their failings.

It was an extraordinary two minutes which saw Arsenal lose the game, one not atypical of their season. Arsene Wenger blamed a lack of pressure from the midfield which allowed the two goals but even that may be a little harsh. Although, of course, it would be dangerous of Arsenal blame bad luck for the way they conceded, but Arsenal were doing everything right up until that moment.

They pressed up the pitch fairly securely although it still has a long way to go to being perfect. They dominated possession too, without really breaking through and the lack of quality in the final third was telling. Olivier Giroud still plays like an excitable youngster at times, attempting lots of deft flicks – which suits Arsenal’s play for the most part, but can border on the excessive – and shots from impossible angles. And Theo Walcott, given a degree of freedom to roam in, did too indulge in excess, often vacating the wide right area when it might have been better to remain stuck. The pair, however, were central to Arsenal’s plans as they looked to create knock-downs for Walcott to run onto and through-pass opportunities were aplenty. But unlike Arsenal, Spurs snuffed them out and Jan Vertonghen in particular, was superb in the backline (making five interceptions) considering most of Arsenal’s attacks were aimed at his side.

Indeed, there was a similarity about Tottenham’s strategy to Arsenal’s – whose main outlet was to spring Walcott behind – because Spurs tried to do likewise with Gareth Bale. The Welshman played a roaming role behind the striker, Emmanuel Adebayor, almost mirroring Lionel Messi’s position in the 2009/10 season, sometimes playing as a striker, at other moments, seen dropping very deep in midfield to pick up the ball. 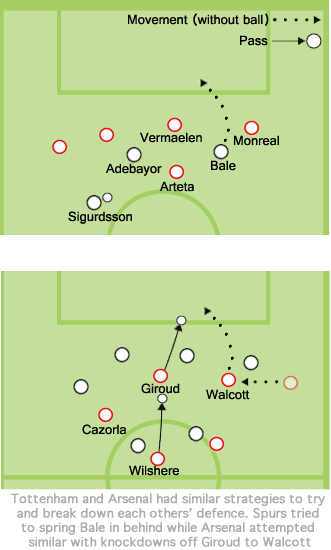 Wenger stated there wouldn’t be a specific man-marking job on Bale but certainly, Mikel Arteta made a conspicuous effort to stay tight on him, at times to a detrimental effect on the team’s shape. That could be displayed by the opener Arsenal conceded although the larger question was why there were two Arsenal central midfielders looking to profit from the knock down after a Wojciech Szczesny long-kick (and that Santi Cazorla was also lurking). When the ball was turned over, there was such a large gap between Arsenal’s back five and the midfield, and Bale was able to make a free run (helped by a brilliant diagonal dart by Adebayor) which was picked out by Gylfi Sigurdsson. A lack of communication at the back was also problematic for the goal, but it was arguably worse for the second.

Again Arsenal lost possession in midfield, Aaron Ramsey dispossessed and Santi Cazorla left lying on the floor. This allowed Scott Parker time on the ball but the high-line which Arsenal played – or rather the failed offside trap – made it too easy for him to pick out a pass. Nacho Monreal should have tracked Aaron Lennon instead of pushing up but it bemuses me why the back four couldn’t just drop back accordingly and delay the pass by Parker. Instead, they tried to kill the attack there and then.

Arsenal’s high-line divides opinion, especially with the presence of Per Mertesacker at the back accentuating its vulnerabilities. But that’s not really the problem. Because pushing up and squeezing space is a solid strategy used by many attacking teams. It becomes problematic when Arsenal overuse it, almost seeing it as a panacea to stop attacks. They feel that if they push up and catch the opponents offside, they can kill the danger instantly. What the two goals showed, however, is that they can be killed just as quickly. What Arsenal need to learn is to drop back when required thus making the getting the pass through the defence even harder. What was galling though, from the second goal, was that new recruit, Monreal, has become suckered into defending this flawed way.

Once again, conceding in the first-half gave Arsenal too much to do. Wenger made the correct substitutions in theory. Spurs played without a proper left-winger and that gave space for the full-back to get forward. Carl Jenkinson did frequently but whenever he got into the final third, had to check back because no-one was there. When Ramsey moved to right-back, he had the best opportunity to vindicate Wenger’s change but dragged his shot wide. Podolski might have come on too late, and Walcott remained on for too long, because his link-up with Giroud was good, at least combined more than Walcott. But Wenger waited, perhaps wisely because he made too many structural changes; Ramsey switched at right-back, Santi Cazorla moved centrally, Tomas Rosicky started higher up but then dropped back when Arteta was replaced.

But without being able to make Plan A work – putting Theo Walcott through on goal – Arsenal lacked ideas. They only created 11 shots in the whole game and perhaps their game plan was too cute.

In the end, it was an all too familiar story.

Previous articleSp*rs 2-1 Arsenal: no case for the defence
Next articleOn defending, attacking and the real reason we’re struggling