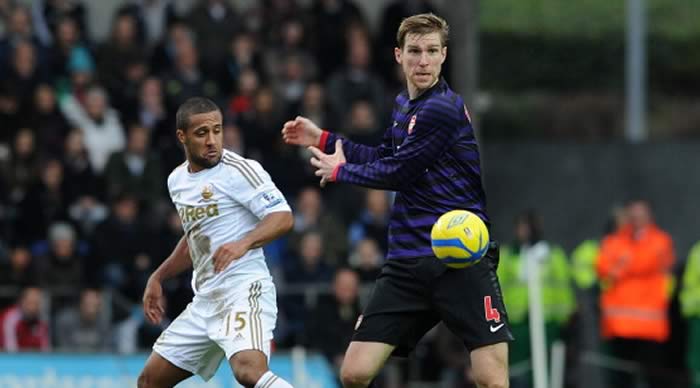 There are times when Arsene Wenger talks and it’s a little difficult to get exactly where he’s coming from. Particularly when he talks about his players being ‘rewarded’, as if they should get medals simply for being nice people and stuff.

But when he speaks about today’s game, there’s nothing obtuse about it. At his press conference yesterday, he said:

We have to keep the positives and be inspired by this result for the rest of the season. For us, every game is a cup final. Swansea is always a difficult place to go and we will need to repeat the game we had at Bayern Munich, it is as simple as that.

Now it is about solidarity, fighting spirit and winning at all costs.

As one wit on Arseblog News commented, perhaps it’s best not to tell them it’s a cup final, given our recent record in those, but it’s impossible to argue with the rest. We have to take the positives from Wednesday night, we can’t drop any more points and if we show the same kind of spirit and desire then we’ve got a great chance of getting a result.

I think we need more from an offensive point of view, but at the same time how often have we bemoaned games where we’ve had countless shots and the opposition have scored and won the game with their only effort on target. I’ll take increased efficiency over of a plethora of failed attempts, but even so if we saw a bit more from Walcott, Giroud, Cazorla etc that wouldn’t be a bad thing.

As I said yesterday I think he’s got to stick with the players who came in and did well against Bayern. Talking about dropping his captain and Wojciech Szczesny, the boss said:

All the players are in the same position: nobody is guaranteed a place in the team. When you go into this job, you know you have competition. They all have the same problem. The job of being a top-level competitor is to deal with that.

Every position is up for grabs. You have to face it like that. The last game decides the next one.

It’s unusual to hear him talk so freely about this, but refreshing too. The simple fact is he left them out because neither player was performing as well as they can, and the players who came in did well, so they’ll stay in the team. It doesn’t mean that he now thinks they’re useless and has already alerted all and sundry to their summer availability as some jumping to conclusions/hits news organisations would have you believe. The hysterical overreaction and ability to create a transfer story out of anything at all must be humanity’s proudest achievement, but this is just something that happens in sport.

It’s down to Fabianski and Koscielny to keep performing to stay in the team, knowing they’ve got unhappy and, perhaps, more motivated players waiting in the wings. No player likes being on the bench, no captain likes the fact he’s been dropped, it should hurt them and, hopefully, inspire them to do better. Everybody needs a little kick out of their comfort zone now and again.

The team know that a win today will close to gap on Sp*rs to just 4 points and 2 on Chelsea. With both of them having been in Europa League action – with the former having gone a gruelling 120 minutes in Milan – there’s every chance putting a bit of pressure on them will pay off.

Of course from our point of view we’ve got a tricky away game after a tricky away Champions League fixture. Even in our pomp, with the likes of Bergkamp, Henry, Pires and Vieira, these were games which often caused us problems. The energy isn’t quite there, the legs feel a bit heavy, so I do wonder if he might rotate the squad a little bit. That said, I’d keep the energy of Rosicky in the team which doesn’t leave a lot of scope for others to come in, maybe Diaby in midfield for Ramsey, but we shall see.

Swansea, as we know, are a very good team, and one who have caused us problems in the last couple of seasons, but their form has been pretty patchy of late. I’m hoping for a bit of a post-trophy winning lull, it can happen, although we’d be unwise to bank on that. The styles of both teams suggest this will be a pretty open game of football.

Whatever happens, there can be no hangover. As fine as the result against Bayern was it’s done, dusted and already consigned the history books [filed under: glorious failure]. There are no laurels to rest on and today’s game should set the marker for the remainder of our Premier League season. Let’s see an Arsenal team that’s full of fight and desire, not just to win, but to not lose also. That was the basis of the win on Wednesday so more of the same would do very nicely indeed.

As always, we’ll have full live blog coverage of the game later on. Check back later for a post with all the info or you can bookmark the default live blog page.

We’ve also set up a Twitter account @arseblog_live which will provide important updates like goals, cards, substitutions, half-time and full time scores. If you follow that and enable SMS notifications via Twitter, you can get those updates sent directly to your phone.

And if you fancy a flutter, Paddy Power will give you a £20 free bet if you sign up and bet £10. Simply click here to register.

And that’s yer lot. Time for some breakfast, and here’s to three points later on.

Come on you Gunners.