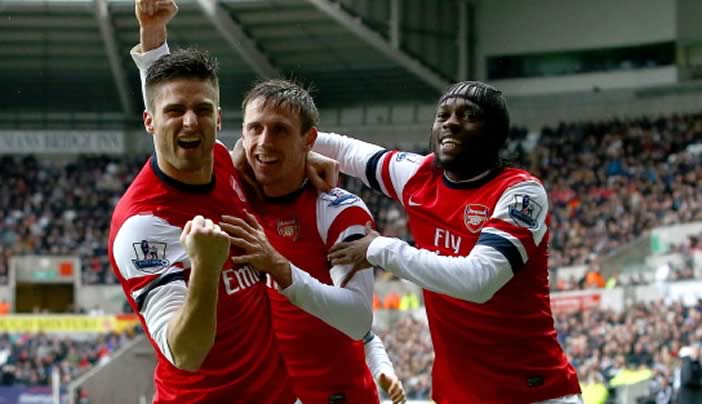 Two away wins in a week, two clean sheets in a week, I feel as spoiled as somebody who has just turned up for the gala ball at the Ambassador’s house and been presented with a perfect triangle of Fererro Rocher on a silver platter.

As expected the manager stuck with Koscielny and Fabianski with Vermaelen and Szczesny sitting their rested arses on the bench, but Monreal replaced Gibbs, Abou Diaby came in for Aaron Ramsey and Alex Oxlade-Chamberlain started in place of Tomas Rosicky. Swansea looked comfortable from the off, as you’d expect, and although the Ox hit the top of the bar twice in the first half, they had the best chance when Michu span and shot just wide inside our box.

Beyond that it wasn’t a first half really worth spending too much time on, and you could say the same for the second. I thought we were on top, while Swansea were a bit off the pace – especially with their passing which surprised me a bit. We probed and prodded and although Vorm was the busier of the two keepers we didn’t look particularly dangerous. We were a bit leggy and lifeless in midfield, the harrying and pressing of Rosicky was not replicated by Diaby and something had to change.

The manager hooked the Frenchman and Oxlade-Chamberlain (who had a solid game) and brought on Gervinho and Aaron Ramsey. Not the kind of game-savers many people would want but they had an impact in a very positive way. Although the Ivorian’s first action was to make a fantastic interception and great run into their box, he kinda Gervinhoed his cross and the chance went begging, but he was lively and gave their defenders something different to think about.

But the opener came from an unexpected source. A fantastic Santi Cazorla run ended with a brilliant ball across goal for Ramsey to tap in. Well, he would have if Giroud hadn’t decided to get in the way, but in fairness to the Frenchman he poked it back to Nacho Monreal who took a step then unleashed a slow, bobbling effort which seemed to take forever to bounce past Vorm but in it went to put us 1-0 up.

Arsene Wenger brought on Kieran Gibbs for Theo Walcott to shore things up at the back for the final few minutes and as Swansea pressed we caught them on the counter-attack. Ramsey was in acres on the right, Gervinho free in the middle, and when the pass arrived he slid the ball underneath the keeper to make it 2-0. I can’t say I felt like ‘Oh this is a goal’ the way you would when Henry got a pass in that area, but fair play to him all the same. They all count.

Three points were secured, another clean sheet into the bargain, and while this new focus on defending and not conceding stupidly has come at the expense of some effectiveness further up the pitch, the fact is some increased efficiency up there means it’s all balancing out quite nicely. Afterwards, Arsene said:

The attitude of our players and our team was outstanding. Even when the legs were a bit less fresh, we kept going and refused to drop points. We knew before the game what was expected, and we gave absolutely everything until the end. What we did in the last three days is always difficult to do for any team.

To win away in the Champions League and win straight away three days later in the Premier League is very difficult. I would like to congratulate the players for that.

And I think that’s fair enough. As mentioned yesterday it is tricky going away from home after a Champions League game, and Swansea are a side who have caused us plenty of problems. What was interesting yesterday was that we almost seemed to play as if we took those problems into account and, you know, learned some lessons from previous games against them. Perhaps more than any other team they’ve exploited the space in behind, we denied them that. We were quite content to let them have the ball back in their half, so we could sit off and get organised, and the fact that Michu, bar that one moment, was as quiet as he was is a testament to the defence who handled him and the rest of the team who denied him service.

At the heart of Arsenal’s performance was Cazorla. I don’t know what else I can say about him really, other than he’s just such a brilliant footballer. It doesn’t always come off for him but he never stops trying to do positive things with the ball, and watching him late on tear around the pitch closing down defenders was fantastic too. The other stand-out performer on the day for me was Carl Jenkinson who was outstanding defensively (bar one wonky pass in the first half), and he must be the fittest guy at the club because the way he got up and down the right hand side was just brilliant.

If there are some concerns it’s that another ineffectual Walcott performance means he’s gone 8 games without a goal, hopefully he’ll come back the far side of the Interlull with his shooting boots on. And while I recognise the manager’s desire to keep things fresh, I don’t think replacing Aaron Ramsey with Abou Diaby does that. The Welshman offers more to the team in pretty much every area and I’m not sure Diaby really does enough to suggest he’s trying to convince the manager he wants to start week in, week out.

Still, small gripes on otherwise excellent day. Let’s be honest, there weren’t too many of us overly confident going into these two games this week. To come out of both as victors, with a pair of delicious clean sheets, and, dare I say it, a sense of renewed optimism … well … that’s a pretty decent return. Well done to all involved.

Right, we just need Fulham to do us a favour today. A Frimpong/Senderos masterclass would do very nicely indeed. Come on lads.