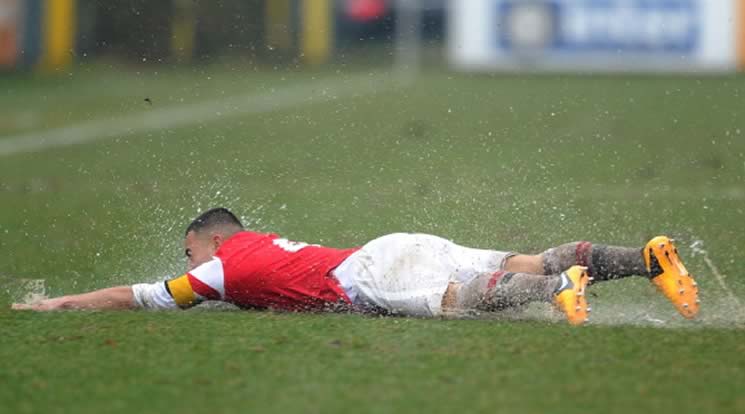 In this hi-tech world we live in, where we can communicate in milliseconds with people thousands of miles away, it’s still annoying that nobody has yet invented an app which, when your alarm goes off, stops time and gives you 9 hours of uninterrupted sleep instead of a measly 9 minutes.

I do wonder sometimes if we exist in a Matrix/Truman Show style combo where those who are pulling our strings find this the funniest thing of all time.

“What do they think those 9 minutes of sleep will actually do? This is the best thing we invented since volcanoes!”

I fall for it every morning. Anyway, enough about how our overlords are laughing at everything we do on an intergalactic TV show, and although we don’t have much in the way of good news this week, I think it’s fair to give a shout out to the kids who made fantastic progress in the NextGen Series yesterday.

Playing against Inter Milan on a pitch so wet it might as well be a Denilson tackle, they beat the defending champions 1-0 thanks to a Nico Yennaris goal. The conditions were woeful, frankly the pitch was unplayable with the ball stopping in puddles, but they scrapped their way to a very good win indeed. They now have a quarter-final tie against CSKA Moscow which, I believe, will be a home game.

There’s some suggestion it could take place at the Emirates but I think that’s unconfirmed as yet. Still, a great day for the kids, a very good win and good luck to then for the rest of the tournament.

Back in the grown up world and obviously it’s still all a bit gloomy. One thing that has amused me, in a kind of not really that amused but you have to laugh because it’s so goddam stupid kind of way, is the fact that the defeat on Sunday has sparked a series of transfer related stories. There’s stuff about players coming in, players going out, hit lists, war chests and the whole lot, and it’s just so ludicrous.

Does anyone really think that in the wake of the Sp*rs game, with 10 games still to play this season, we’ve begun to let slip our transfer plans for the summer [please insert your own: ‘what transfer plans?’ gag here. I just don’t have the time]. Have we made it known who our targets are and who, from this current squad, is expendable? Or, is it just a case that after a poor result when people are, rightly enough, craving a bit of change and desperate for news which isn’t related to the turmoil, that this suits the people who need to sell the papers and have the things clicked?

Clearly, there is a lot to do this summer, but given the fact we still have 30 points to play for and 10 important league games it’s a little premature to start getting involved in the madness just yet. With no big summer tournament to act as a distraction there’s an entire summer ahead to work ourselves into a frenzy before we sign another left-back on August 31st after Dick Law has had month-long discussions with Fritz Battenburg from Bayer Municipal Parkworkers XI. Everything in good time folks.

Speaking of the summer, there are the U21 European Championships (as I mentioned, no big summer distraction) and we know how much England’s U21 boss Stuart Pearce wants to bring Jack Wilshere. Thankfully, however, it looks as if common sense (from elsewhere, of course) has prevailed and after discussions with real manager Roy Hodgson, he said:

We’ve had a chat and the information was that, probably, Jack won’t be considered.

Haha, I like the fact that even when I’m sure it’s been made quite clear to him that Wilshere is now an important part of the senior team and that playing U21 football would be a regressive step, he still won’t fully accept it. He bangs the drum about how it’s important the players get big tournament experience, failing to note that the U21 European Championship is not a big tournament and, frankly, nobody cares who wins it or how apart from the players and probably their mums.

Anyway, how is any player supposed to play in a meaningless tournament when they’ve got commitments to travel around Asia for a pre-season tour? There’s certainly no better preparation for a new campaign than travel, airports and jet-lag, and with games already lined up in Japan and Indonesia, it seems as if we’ll be playing a pre-season friendly in Vietnam.

While I think we all understand the need to grow and develop the fan base, and the commercial side of the club by raising its profile in football crazy countries, it’s hard to convince me that this is the best way to get ready for a new season. From the pastoral quiet of Austria and the training camp, we seem to have gone miles the other way in a very short space of time. Of course our on-pitch woes are hardly a consequence of a summer tour, but you do these things with fewer eyebrows raised when you’re putting it in week in, week out, on a consistent basis.

Right, not much more to it than that. Back tomorrow with an Arsecast, and whatever bits and pieces go down between now and then.