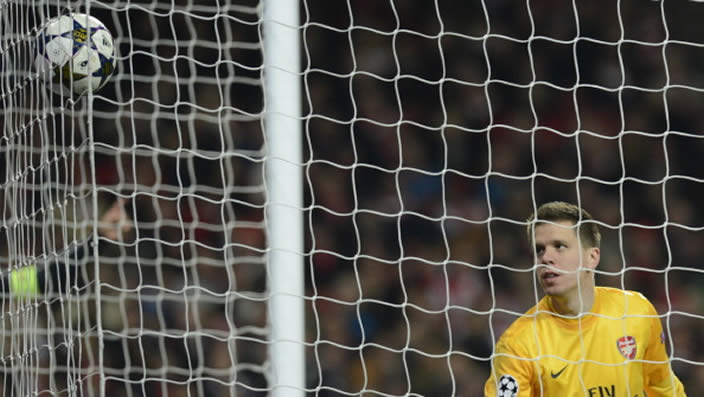 After 10 days without football there’s usually a sense of anticipation when the next game comes along, but to be perfectly honest I’m not particularly looking forward to tonight at all.

An Arsenal side without Wilshere, Podolski and Sagna through injury, will face a strong Bayern Munich without the first choice goalkeeper too. Arsene Wenger says that Szczesny needs a breather ‘mentally’, but however you try and rationalise the decision to leave him behind it’s far from a ringing endorsement of his ability and the manager’s faith in it.

If, like Manchester United, for example, we had two goalkeepers who were scrapping for the position, then you could find some logic to it, but to bring back Lukas Fabianski – a man whose last competitive game for us was on Feb 12th 2012 (a 2-0 defeat to Sunderland) – seems ridiculous to me. Especially when the manager is talking about ‘going for it’ and how a big win would do his side the world of good.

I do realise that Szczesny hasn’t been at his best at times this season, but that’s true of a number of players. Thomas Vermaelen, for example, will captain the side tonight most likely, and he’s been far from perfect in recent weeks and, let’s be honest, most of the season. This is like being dumped for a fat spotty bloke who always has crusted snot around his nose.

It might turn out to be a stroke of genius in that it could provide Szczesny with a kick up the arse, but it could have the opposite effect too. All the same, in a recent interview with Amy Lawrence, the Pole talked about how much he loved pressure and it’s most certainly on now. I don’t think anybody was calling for him to be ‘rested’, nobody would have batted an eyelid if he’d started because he’s clearly the best goalkeeper we have at the club, but by resting him it’s become a thing that it never needed to be.

As for the rest, well, if it were me I’d be sending a team out to try and put in a defensive shift and use that as a platform for the final ten league games of the season. Arsene can talk about the boost the team would get if they beat Bayern, but wouldn’t there be a similar boost for a leaky defence to keep a clean sheet against such illustrious opposition? Baby steps and all that.

It’s not going to happen that way though. Arsene Wenger’s outlook on football is that the best form of defence is attack and I can’t imagine tonight’s team is going to be any different. He’ll be looking for an early goal, if we get one it might just make it a little bit interesting, but I’m fearful that an early goal for them would set them up for the kind of game in which we get exposed all too easily.

This is a side low on confidence after just one win in our last four games and while I think tonight does provide the chance for us to regain some of what we lost, it has the potential to be even more damaging. Frankly, I’d just like to get this out of the way and concentrate on the league. Of course you never know what might happen, everything might fall into place, luck might be on our side and we can come away from Munich feeling a lot better about ourselves, but talk of miracles and impossible dreams just seems fanciful to me.

Does it say a lot about me or the team that I’d take a 0-0 if you offered it to me now? I don’t know, but I can’t ever remember feeling this downhearted about our chances going into a game like this. At the very least I’d like to see some pride restored and an Arsenal side that doesn’t shoot itself in the foot. We could win the game itself, I don’t see us qualifying, but at this point it’s not about that, it’s about performance and what we can take from it into the Premier League run-in.

In other news Arsene Wenger has explained a little further about Jack Wilshere’s injury. The suggestion is that he’ll miss the Swansea game but all going well should be back after the Interlull, and the boss says:

We do a regular scan on him and, on one of the scans, it showed up bone bruising on the heel on the right foot. He had some inflammation on the right ankle, where he had surgery, and certainly compensated to protect that ankle, and put too much pressure on the left one.

Every month, he has a scan of the two ankles because you ask him how he is and he says, ‘Perfect.’ It was bone bruising last time, which deteriorated into a stress fracture. That is what we don’t want to happen, nobody knows if it was going to happen again.

And while some will criticise that Wilshere is being ‘overplayed’ there’s also an onus on the player to understand his body. If he’s not ‘perfect’ he has to say it and realise that missing a game or two in the short-term is far better than the absence he’d suffer if he ignores the aches and niggles that are the precursors for more serious injury. I get that he’s the kind of guy who wants to play all the time, and you don’t want him to turn into one of those players who’ll insist on sitting out for any small little thing, but there’s a balance to be found.

Injuries are part and parcel of the game, and Wilshere is a player more liable to pick them up because of his style of play. Leaving him on the bench for a couple of games here and there sounds fine on paper but as one of the best players in a team short on quality that can come across as self-defeating too. Not to mention the fact that when he plays he regularly has lumps kicked out of him by opponents, and I’m sure that’s where the majority of his problems come from, not anything else.

Maybe it means we need to look at signing somebody this summer who can play the role of enforcer, to offer Jack a bit of protection, but his dribbling, last second passing and general style means he’s a guy who’s always going to get whacked. Let’s hope it’s not any more serious than the few weeks suggested by the manager, because we’re going to need him in these last few weeks of the season.

As always, we’ll have full live blog coverage of the game later on. Check back later for a post with all the info or you can bookmark the default live blog page.

We’ve also set up a Twitter account @arseblog_live which will provide important updates like goals, cards, substitutions, half-time and full time scores. If you follow that and enable SMS notifications via Twitter, you can get those updates sent directly to your phone.

And if you fancy a flutter, Paddy Power will give you a £20 free bet if you sign up and bet £10. Simply click here to register.

And that’s yer lot for this morning. Let’s see what happens later. Until then.