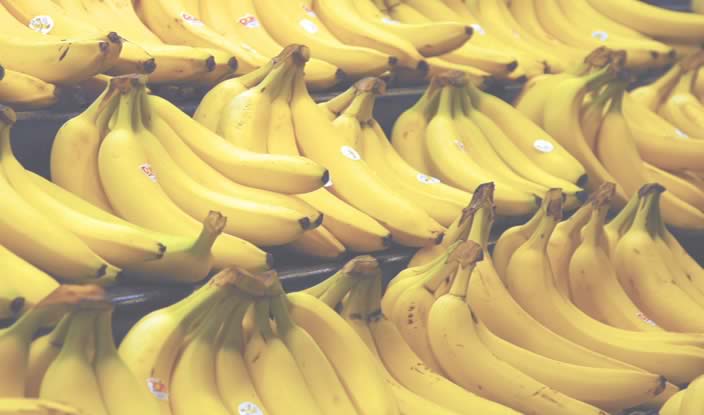 Good morning and welcome to Saturday.

It’s an odd weekend because due to our decision to concentrate on Europe at the expense of the FA Cup we’ve got no game. Everton, who had no such conundrum, are still in it so we have ourselves a weekend off. And as you can imagine it’s pretty quiet.

With no game until Wednesday there’s been no press conference, no injury updates, nothing. Which leaves us in rather a pickle when it comes to the blog. There’s nothing much happening which gives us little to write about.

However, I did see a story about the Arsenal fan who threw a banana at Gareth Bale being arrested. According to reports:

He is charged with throwing a missile on to the playing area, and using threatening, abusive or insulting words or behaviour or disorderly behaviour likely to cause harassment, alarm or distress.

A missile?! While obviously you don’t want people throwing things onto the pitch, it’s a bit of a stretch to call a banana a ‘missile’. What does that make a pig’s head; a dambuster or an IED of some kind? As for using threatening, abusive or insulting words, might I suggest that Sky provide the authorities with the unedited footage of Jack Wilshere taking a corner from last Sunday.

Before the sound guy had a chance to turn down the microphones, it was easy to hear the Sp*rs fans using the very same kind of language towards Wilshere. So is it only an offence to use this kind of language when combined with throwing a ‘missile’ onto the pitch? I’m not one for the santitising of the game, it’s heated and passionate, and people say things, but if you’re going to officially charge somebody with ‘threatening, abusive or insulting words or behaviour or disorderly behaviour likely to cause harassment, alarm or distress’ then football stadiums are going to be very empty places indeed.

Why was this guy singled out? Simply because of his banana? It seems ridiculous to me. Can we make the assumption that next time Chelsea fans throw celery around the place they’re going to rounded up, arrested and charged with ‘Intent to harm with an ingredient from a Bloody Mary’? And if they’re swearing too, goodness me, the football world will be well rid of anyone who might call an opposition player a name that isn’t their own.

What about this lady? To me she’s a hero, but nowadays I assume she could be facing 25 years without the possibility of parole for making ‘An obscene gesture towards a player everyone wanks themselves silly over just because he does yoga and is fitter than most 39 year olds probably because he spent some much time out injured with his hamstrings he’s got plenty left in the tank which means Tomas Rosicky and Abou Diaby will play till they’re 50. Or something’.

It was a banana, for goodness sake. Not a coin or a brick or a dagger. It wasn’t even a watermelon or cantaloupe which, could, in fairness, have done some damage. It was actually thoughtful, seeing as it was a tasty snack which most everyone enjoys. He didn’t run onto the pitch, he threw a piece of fruit and called some cunt a cunt. If that means he’s going to get banned from the stadium, well, maybe he should have thought better of his fruit chucking given the football climate, but police involved?

An entire stadium can sing a horrendous, defamatory song at our manager, season after season, with not an arrest or punishment from the authorities (footballing or otherwise) but one bloke is singled out for something like this. What a load of rubbish.

In other news, there’s a chance for people to go and see the youngsters as they play their NextGen Series quarter-final against CSKA Moscow at the Emirates on Monday, March 25th. Tickets are as cheap as £1, maximum £4, and the lads will surely welcome the support as they look to build on their great win over Inter Milan in midweek. Details here.

Finally for today, we’ve been making some changes during the week here and on Arseblog News. Every time we do there are some difficulties so if you spot anything, please feel free to get in touch and let me know. The contact form is a bit broken (working on it) but the email address is on the contact page and not too difficult to decipher.

Right, that’s that. Have yourselves a fruity weekend. You know what I mean. Till tomorrow.