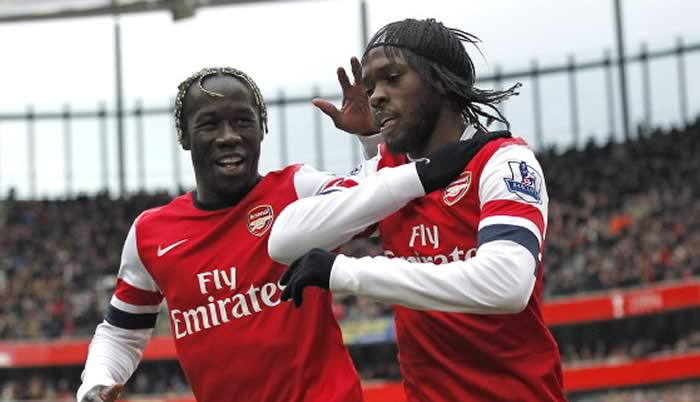 Sometimes the game throws up unlikely heroes. Yesterday, having been handed a start over Alex Oxlade-Chamberlain when the England man might be considered unlucky to find himself on the bench, Gervais Lombe Trevor Ernest Borgnine Yao Kouassi, hereto referred to as Gervinho, was that man.

At times he did the things that make you shake your head. Like running at the Reading defence, getting to the edge of the box, and taking a shot that took a few minutes to roll out for a goal kick. Or making a brilliant dart in the channel, being found by Cazorla, then mis-kicking his cross. But in the end he left the pitch having scored a goal and notched up two assists, which is a very healthy return for any player.

He opened the scoring in the 11th minute, getting between the defenders with perfect timing to side-foot home Santi Cazorla’s dragged shot. He had started the move cutting inside from the right and running at the Reading defence, something he did time and time again throughout the game. He had a couple of headers that drifted wide, he showed quick feet in the box to make space to fire over the bar, and he was constantly involved.

Early in the second half he played the pass from which Santi Cazorla sumptuously cushioned and curled Arsenal’s second, and when a Reading corner broke down he was the outlet for an Arsenal break. He kept the ball, waited for support, took a couple of defenders with him and played it for Giroud to finish well first time to make it 3-0. When he was replaced by Oxlade-Chamberlain, there was generous applause for a player who doesn’t tend to hear it often.

Whatever you think of him as a player, and I know his inconsistency and unpredictability is hugely frustrating at times, he played well yesterday and it’s only fair to give him props for that when he gets it from both barrels most of the time. It’s not about defending him, or trying to build him up to be something he’s not, but appreciating the fact that one of our players had a decent game and contributed a great deal to a good win.

Around him Santi Cazorla was his usual busy self, while I thought the midfield trio of Arteta, Ramsey and Rosicky were fantastic. Their energy and workrate set the tone for the day and the three of them combined made 22 more passes than the entire Reading team put together. When we didn’t have the ball (which wasn’t that often in fairness) they chased it down, won it back and made sure that the visitors couldn’t get any kind of grip on the game at all.

At 3-0 we did a very Arsenal thing and conceded straight away, Monreal allowing Hal Robson-Kanu (son of Bobby and the former Arsenal striker) to head home at the near post, but Oxlade-Chamberlain won a penalty which Mikel Arteta tucked away for his 5th goal of the season. Although the foul looked to have started outside the box, I don’t think Reading can complain too much having seen Chris Foy ignore the most blatant penalty you’ll ever see in the first half.

When Giroud flicked the ball over Taylor, the ex-Arsenal keeper absolutely flattened the Frenchman, but for some reason the ref and his assistants deemed it not to be a penalty. If that’s not a spot kick then the world has gone completely mad, and Foy was irritating throughout the first half, on one occasion playing an ‘advantage’ to Arsenal when Cazorla was upended on the edge of their box. Complaining about a referee always sounds better when you’ve won, so forgive me the indulgence.

In the end Arsenal were toying with a Reading side who look doomed to relegation and didn’t get the bump in performance a new manager can bring. Part of that was because they’re a poor side anyway, and the tactics on the day weren’t up to much, but the other part is because Arsenal played very well and made like extremely difficult for them. Afterwards, Arsene said:

I enjoyed our technical side, our creative side, our spirit and how disciplined and focused we were. The regret you have is that there were more goals in this game than the number of goals we scored. Overall, it’s a good basis to finish the season well. Let’s just keep that spirit, that attitude and play the football we want to play.

We certainly could have scored more but you can’t complain about 4. I was a little worried at half-time that a one goal lead wasn’t really sufficient reward for how on top we were, and was fearful that Reading sneaking one from a corner or something would damage the confidence, but the early strike from Cazorla made sure we stayed on top of the game.

Their goal was a little bit irritating, I think there was a touch of complacency about our defending having just gone 3-0 up, but even that didn’t provide Reading with enough of a boost to change the dynamic of the game. It was as comfortable a win as I can remember this season, and with Chelsea dropping points it puts us within touching distance of them. The common thinking is that we’ll have to finish above Sp*rs to play Champions League football, but I think Chelsea ought to be a bit worried that they’re the ones who’ll miss out.

All in all, just what the doctor ordered. A good display, confidence boosted again, and three vital points tucked away under our belts. One down, eight to go.

Have yourselves a very good Sunday (not too much chocolate). Till tomorrow.