It’s possible to look at Arsenal’s team sheet as essentially a list of heroes and villains in the play that’s about to unfold. There’s Jack Wilshere, returning to the fold after a long absence like a war hero; Bacary Sagna, Arsenal’s Mr. Dependable and Mikel Arteta, the man who everyone feels should be leader. On the other end, however, you have the bumbling jester in goal, Vito Manonne; the equally calamitous Andre Santos and the infuriatingly talented, Aaron Ramsey.

Against QPR on Saturday, the main narrative was always going to centre on Wilshere. It’s understandable; he’s the first of a talented group of homegrown players to come out of the academy and was making his long awaited comeback from injury. Wilshere’s first touch was greeted with loud cheers by everyone at the ground and there was a buzz of anticipation every time he got the ball. It was a different story, however, for Aaron Ramsey.

The Welsh midfielder has recovered from a serious injury of his own and while he received plenty of support early on, that has quickly dissi pated. On Saturday, the crowd gradually grew restless of his tendency to procrastinate on the ball and what followed was the now customary smattering of groans around the Emirates.

Aaron Ramsey played on the right of a front three for Arsenal, the common Arsene Wenger answer for this is that it gives the team technical balance (and that also, Arsenal, lacking in confidence after two defeats in a row, would prefer to keep the ball as often as possible. Although judging by the impact made by the wide men in the second-half, there may be an argument to say Arsenal should have just winged it). But perhaps there lies more to the reason why Wenger has persisted with Ramsey on the right (in 6 starts, he has played four of them out wide).

It’s because this season, Arsenal have lacked balance. Not in normal terms as in attack and defence but in terms of left and right. The subtle differences in the way Arsenal attack from either sides mean there’s not complete harmony in their forward play.  That can be displayed by the Player Influence chart below: Sagna and Ramsey have complete freedom of the right hand-side. Which implies they should do more (and to be fair to Sagna, he showed with his bursts forward, what Arsenal have lacked from right-back). But with more ground to cover that meant actually, there was very little on. In particular, when it fell to Ramsey, he had nothing in front of him and usually relied on Sagna to try and catch up on the overlap.

That’s why Ramsey deserves more credit; his ball retention was superb, shielding the ball well and worked so hard just to cover Arsenal’s deficiencies. That can be backed up his stats: Ramsey had an 87% pass accuracy, attempted the most dribbles (at 4/8 successful) and also hit bar (that last one doesn’t actually constitute a stat but it does highlight one of his best attributes – his runs into the box). 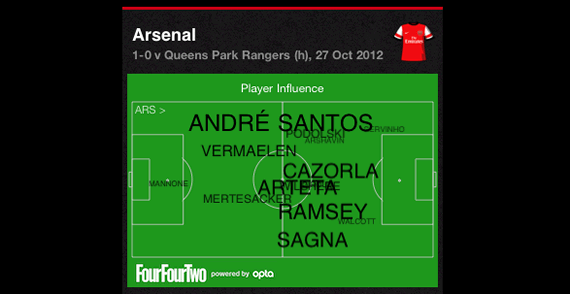 Last season, Arsenal favoured the right side more, attacking 37% from that side as opposed to 31% from the right. But that asymmetry was not a problem. It meant balance in the sense that the differences in the way Arsenal attack from the different sides complimented each other. They had a good understanding between Sagna and Theo Walcott while the double pivot of Alex Song and Mikel Arteta gave right and left balance respectively. Conversely though, the imbalance was in attack and defence where the double pivot failed to be the disciplined base it is this season.

What’s been the problem this is that Arsenal have failed to get the different components to work as a whole. The Podolski-Cazorla-Gibbs partnership has worked in the main, as has the Arteta-Cazorla combo while Giroud has showed good movement as a decoy. Yet, even then, he hasn’t quite got his team-mates to take advantage of his runs in a discernible way. But Wenger has even admitted that he hasn’t quite got the offensive balance correct, that it’s the hardest thing to get right.

One of the problem positions has been the midfielder who plays with Mikel Arteta. The obvious candidate would have been Aaron Ramsey after Abou Diaby’s injury. But out of the fire appears what seems the perfect candidate: Jack Wilshere. Left-footed, blessed with the dribbling ability to seamlessly switch defence to attack and of course, his stellar first season in that role anyway. That would mean Arteta on the right and Wilshere on the left, right? Wrong. Because for the most part against QPR, Arteta preferred to play towards the left, especially when defending. As he likes to receive the ball from the back too, he tends to start from the left so that his body is open to play. That forced Wilshere more to the right.

Nevertheless, Arsenal prefer to play with a staggered midfield two – with one slightly ahead of the other – anyway and only in the defensive phase is it really relevant who is on which side.

It’s rather fitting then, that Mikel Arteta would deliver the winning goal: Arsenal’s most fluid player in both attack and defence.

Previous articleAW urges caution over Jack, thoughts on his return
Next articleReading preview: something to prove in different ways