He didn’t have to say it, but Arsenal’s defeat to Chelsea can be put down to a lack of “mental strength.” That’s the view of Gary Neville, writing for Daily Mail, who used one of Arsene Wenger’s most famous – and often parodied Wengerism – to describe the reason for the loss. “It’s that unexplainable edge in sport,” Neville says, “which is impossible to coach and you can’t teach but which makes the crucial difference nonetheless … it was as though there was one team who absolutely knew how to win a big game and another team that weren’t too sure.”

That analogy could also be extended to the coaches because Chelsea essentially did a masterful hatchet job on Arsenal. There were eyebrows raised when Roberto Di Matteo selected a trio of Eden Hazard, Juan Mata and Oscar behind Fernando Torres but despite that – or rather, because of that – they successfully stopped Arsenal from playing. The Brazilian, Oscar, pressed Mikel Arteta from the start while in the second-half, Ramires never let Santi Cazorla out of his sight.

Di Matteo warned of giving Arsenal too much room to play before the match so he congested the centre and relegated Arsenal’s passing game – noted for its precision and exactness – to one of inaccuracy by forcing them to cross. Of course, the goal Chelsea conceded came from such an occurrence but a crossing game depends on frequency and Di Matteo fancied his team’s chances of dealing with the majority of them. 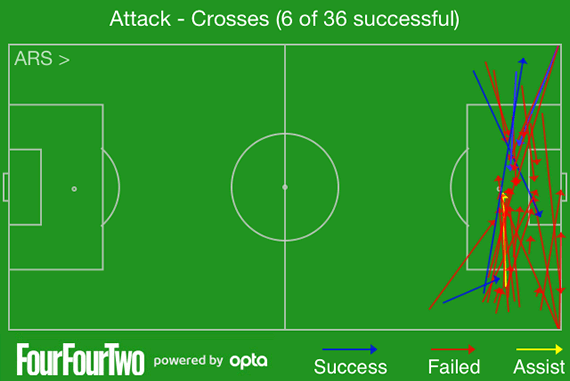 Arsene Wenger’s fortunes can be summed up by the two goals his team conceded – from two inexcusable set-pieces – the failure of which can be traced back to his decision not to start Per Mertesacker. That was the one real tactical change he made to his line-up, largely opting to go with the same team that drew against Manchester City and thus hoping, to deal with Chelsea’s fantastic three – and Hazard in particular – through staunch organisation.

Wenger’s not one to alter his tactics drastically to suit the unique threats of his opponents, rather placing faith in his side’s technical ability. As such, victory is expected to come naturally: as a direct consequence of their supposed superiority.  Which is a perfectly plausible philosophy but when a team such as Chelsea prevent them from playing their normal way, Arsenal have got to find other solutions, other ways to break teams down. Not necessarily a Plan B, because as Marcelo Bielsa says, “attacking football has its nuances” and it’s controlling and understanding those nuances that win you matches.

Chelsea stopped Arsenal from playing out the back through Arteta who, as Tim Stillman writes, “has become akin to an umbilical cord for Arsenal. That prevented the team from building from the back, which they like to do.” That tactic was extended to Cazorla who, while still having a massive influence on the way Arsenal go forward, was unable to transplant the same control which he usually does. Arsenal’s combination play through the middle was snuffed out and instead funnelled out wide, where they are less of a threat.

As a result, other valuable members of their system failed to make an impact; Lukas Podolski’s style of give-and-goes was completely negated by Chelsea’s approach while Gervinho, who worked hard and scored, couldn’t provide the same threat drifting inside from the flanks. It’s hard not to think what impact Abou Diaby could have made if he didn’t go off injured as it upset Arsenal’s shape. More and more Arsenal relied on Arteta and Cazorla and while those two have far and away been Arsenal’s most important players, one can’t overlook the platform that has been set by having a dynamic and flexible central midfield duo.

Defeat to Chelsea is more annoying than worrying; Arsenal had more efforts but it was the sloppiness of which they conceded which was most dispiriting. Nevertheless, there are still some issues that Wenger needs to address. Most easily remedied is seemingly at centre-back where Arsenal can realistically call three quality defenders as first-choice although they only have two partnerships. And both include Per Mertesacker. Other, less obvious decisions, are choosing who plays central midfield in place of Diaby and whether to give contract-rebel Theo Walcott his right-wing berth back. Do Arsenal have the luxury to make such a choice?

Arsenal’s good start before the defeat to Chelsea was predicated on defensive staunchness and discipline. That didn’t totally go amiss on Saturday although Thomas Vermaelen’s impetuousness, which saw him concede the two fouls which led to Chelsea’s goals, has not been in keeping with his near faultless start. But what if failure to get a result had, in some part, to do with this overt desire to get compact? For Arsenal started the game so deep and allowed Chelsea time to build up-play.

They might have gotten away with it to some degree so far this season because the opponents they have faced are not as proficient with the ball as Chelsea. Even Manchester City, a bigger test supposedly, played three strikers and one of them, Sergio Aguero in the hole, so there wasn’t anyone to take the ball off the midfield. City scored when they momentarily moved Silva inside. Chelsea had Hazard, Mata and Oscar for Mikel to find.

In another hard-fought encounter, against Montpelier, Arsenal were unable to get out of their own half as they were pushed, and dropped, ever deeper. As such, The Gunners hold the curious distinction of making the most tackles in the league and also the most tackled team in the league. It wasn’t necessary to play 10-15 deeper than last season at home to Chelsea. Perhaps, in some games, Arsenal’s 4411 is a bit of a double-edged sword?

Changing of the Odegaard