Our good friends at GCR Books have given us 3 copies of ‘Wally Barnes – Captain of Wales’ to give away. 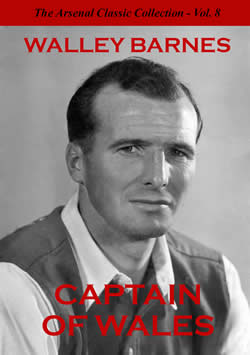 After our last home game of the season, Tom Parker called the regular players to his office one by one, to tell us that, owing to a difference of opinion, he was ending his contract with Southampton. Tom wanted to know from each player whether he wanted to stay with Southampton or to go to another club. Most of the “guest” professionals elected to move, and Tom fixed them all up with other teams eventually. I was the last one to enter his office. “I’m not asking you where you want to go, Walley, I’m telling you!” said Tom. “You’re going to Arsenal.”

Walley Barnes joined Arsenal in 1943 and played 294 games, scoring 12 goals for the club, before retiring in 1955. Playing at both left and right full-back he won League and F.A. Cup winners medals with Arsenal and made 22 appearances for Wales, many as captain.

To enter, answer the following question: GCR Books are republishing another Arsenal-related title on 18th August. What is the title of this book? Is it: