Morning all, last night I dreamed that Google launched a thing called Google Cake, where you could download ready made sponge cakes but you had to do all the icing and filling and stuff yourself. It got messy.

Anyway, plenty to be going on with this morning as the club yesterday confirmed that Pat Rice would be leaving after 44 years. Arsene Wenger paid tribute to his right hand man, saying:

I am very grateful for his contribution to my period here. I would like him to forgive me for the bad moments I have given him as well! He has been a constant, loyal supporter and I’m just very grateful and privileged to have had him at my side for such a long time.

And there are some lovely tributes from some of the players and staff across the years here. I particularly like Tomas Rosicky’s:

Hi Pat, I am very sad to see you go. Every morning I will miss that 10 minutes before training starts when you come into the dressing room and shout at us!

Jokes aside though, Pat Rice was a presence at our club for 44 years. Those who dismissed him as a ‘yes man’ really hadn’t got a clue who they were talking about and clearly forgot that it was Pat Rice by Arsene’s side when we won doubles and went a season unbeaten. There didn’t seem to be any problem with him then and the way people have lashed out at times is an illustration of the thoughtlessness of some fans.

But Pat was a real Arsenal man, a gentleman and a man who represented us with honour. He knew what it was to be an Arsenal man and he passed that on to so many of those around him down the years. That kind of person is just so important to have at the club. Of course some players might not get it when he tells them what’s what, but you can’t win ’em all. The best of luck to him and I hope he has a happy and long retirement.

Pat’s departure means the gap will be filled by Steve Bould. Arsene confirmed his promotion at his final press conference of the year yesterday and said it was something of a natural progression:

His qualities are that he has experience of the top-level game, he has managed here, he knows our football philosophy and therefore there will be a continuity. He has also chosen after his playing career to coach here at the Club and we always want to give an advantage to people who know how we work, how we want to coach.

It will be interesting to see how quickly Bouldie adapts to the new job. It’s high profile gig and a far cry from the youth team coaching/managing he’s been doing. Stepping up alongside Arsene will be so different but we know from his playing days that he’s a man of real character and if he brings some of the uncompromising nature of his defending to the assistant manager’s position then he should settle in pretty quickly.

He’ll have to adapt on the training ground too but I don’t see any issue there. He might be coming from the youth set-up but his pedigree as a player means he should command all due respect from the first team. Any one of them that has any doubts about him should read his CV, look at the tapes and realise that he was as fine a defender as we’ve had at this club. He was, perhaps, overshadowed by the aura that surrounded Tony Adams as captain, and wasn’t as ‘in your face’ as Keown, but he was a brilliant central defender and a massive part of that famous back four. Tough too, and hopefully he can add some of that to the way we defend next season.

As it was Arsene’s press conference yesterday there was a bit of team news ahead of West Brom on Sunday. The most significant piece of that is Theo Walcott faces a late fitness test on his hamstring and could play a part. I’d be surprised to see him start the game although if he’s fit, he’s fit and Gervinho has hardly been pulling up any trees since he’s been playing down the right hand side. And as hit and miss as Theo has been this season, we know he’s got a good connection with Robin van Persie on his day, which may just make the different. Let’s hope that if he is fit, he has one of his consistent patches.

And finally, before we get to the Arsecast, I’m left wondering about the true meaning of the word ‘exclusive’ after seeing this in today’s The Sun. 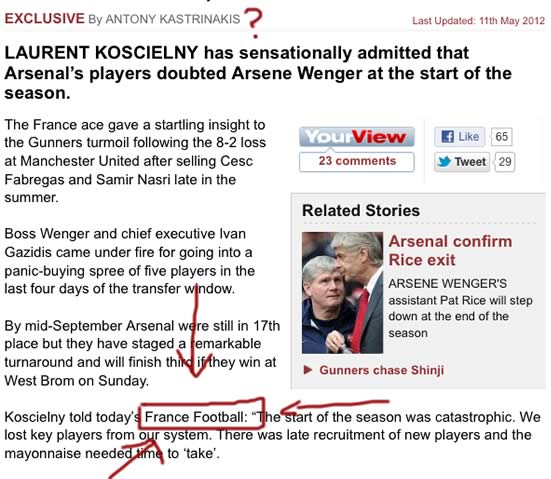 Somebody in there needs to consult a dictionary with their mayonnaise. You can read the full, properly translated interview with Laurent by Philippe Auclair on the official site.

Right then, onto this week’s Arsecast and I’m joined by Tim Clark of Arse2Mouse and Andrew Allen of The Arsenal Collective to discuss the week that was. On the agenda, Norwich, our end of season troubles, transfers, Yann M’Vila, Pat Rice and more.

Also in the mix, Arshavin pops in, Internet Joe, Mick Bendtner (TGSTEL), plus your chance to win a signed copy of So Paddy Got Up.

You can subscribe to the Arsecast on iTunes by clicking here. Or if you want to subscribe directly to the feed URL you can do so too (this is a much better way to do it as you don’t experience the delays from iTunes). To download this week’s Arsecast directly – click here (30mb MP3) or you can listen directly below without leaving this very page.

And that, my good old friends, is about that. We can spend the next two days previewing the game on Sunday, in the meantime have a nice Friday until it reaches Beer O’Clock.