Much has been made of Thomas Vermaelen’s performance against QPR on Saturday and I’m quite sure he’d be the first to admit it was not his finest hour. Not for the first time this season he’s slipped at a crucial moment, resulting in an opposition goal, so perhaps he ought to be considering a change of footwear (blades v traditional studs, for example).

Yet Vermaelen’s slip at Loftus Road didn’t result in the opponent shooting directly on goal, as it did in Milan. It was a Hlebtacular pre-assist slip. Mackie rolled the ball back to Diakite who finished as calmly as any player with nobody anywhere near him should. And while the focus will go on Vermaelen’s slip, the bigger question is why Diakite was all on his own.

If you look at the footage again when QPR lob the ball forward both Arteta and Song are guilty of ball-watching of the worst kind. When Vermaelen slips neither of them have reacted and while Koscielny and Sagna are set up correctly, there’s too much space between our back four and midfield.

I don’t know who the QPR player making a break closest to Song is, but he simply doesn’t react. Arteta is ambling back and totally misses the fact that Diakite is making a run into the box, allowing him all the time he needs to score the goal. 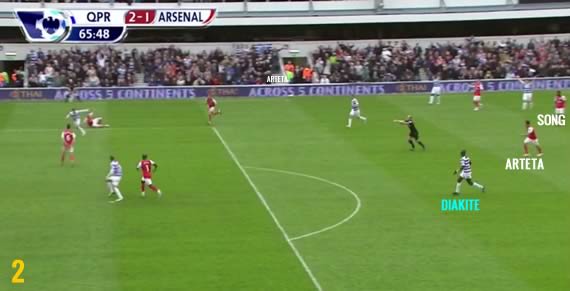 Now, our recent run of results has been built on hard work, first and foremost. The finishing ability of Robin van Persie has played a major part but in general the team has been aware, defensively sound and willing to put the running in, but this illustrates just how easily you can be punished if you take your foot off the pedal even for a moment. The margin between winning and losing, or even drawing, is incredibly tight, and as much as Vermaelen will take pelters for slipping and allowing the chance to be created, for me the midfield duo have to take a big share of the blame for this goal.

Standing watching play like that is unforgivable. And these aren’t two inexperienced kids we’re talking about here. They know full well what’s required of them and simply didn’t do it. The old cliché about a chain only being as strong as its weakest link applies here. For that few seconds – because that’s all it takes – Arteta and Song were the weak links. A slip is unfortunate, it can happen, but if the team was working hard as unit like it has done over the past few weeks, then a dangerous situation could have been snuffed out.

At the end of the day the result does not lie. The focus was missing a little bit and the way we conceded the goals [was disappointing]. I felt that we lacked something, I do not deny that.

We have to go back to basics; that means to win football games and win your fights first.

Fight isn’t just confined to challenges and tackles, it’s about denying your opponent space and time too. We worried about a touch of complacency creeping in and that’s where QPR’s winner came from. This time there was no last gasp rally, no late, late goal to save us at least a point. And what makes it worse is the fact that we can’t use tiredness or fatigue as an excuse/explanation. We haven’t had a midweek game, the Villa game last weekend was essentially a stroll, so it all comes down to concentration. We let that slip and we got punished.

Much as I dislike linking to it, there’s an interesting piece in the Daily Mail from Gary Neville about how a player’s mental focus is the difference when it comes to winning titles. Yet it applies not just to teams who want to win things. In top level sport you have players whose technical standard is pretty similar. Obviously there are those who stand out as exceptional, but what makes one guy better than another?

Often it’s down to their mental strength (I know, I know) and the ability to produce a consistent level of performance. That means keeping your concentration for 90 minutes plus injury time, being aware of danger or spotting opportunity, and knowing that a failure to do so can be costly. And maybe that, more than anything else, more the technical quality of the players we have and have had, is what has been Arsenal’s major downfall in recent seasons.

We’ve put ourselves in good positions in the league and in cup competitions but fallen short because we don’t have what it takes up top to go the distance. Individual errors have been the bane of our defensive existence, too often they come from players switching off at vital moments. Add a good dollop of pressure and expectation to the mix and it increases the likelihood of those errors occurring.

Even last week when we were three points ahead with eight games we never thought it was done. It won’t be easy, everyone is fighting for every point and our opportunity is next week against Manchester City.

We have to go for it and believe – and we will

And while that message has been constant, in fairness, it needs to be revisited again and again in the week building up to Man City. QPR was a kick up the arse, a reminder that if you fall short, even a little bit, even for a couple of seconds, then you will pay the price in the Premier League. When your next opponents have a team full of players who can hurt you and score goals, then you need to get refocused and sharpish.

News throughout the day over on Arseblog News, back here tomorrow. Have a good Monday.