Having last week ruminated in full on the state of our rearguard this season; this week’s column will meditate on the performance further up the pitch. Taking in the oily machinery of the midfield engine room, through to the leather upholstery and walnut gear knobs up top. (Or in some cases, those big seats on the bench that look like they’ve been half inched from the McLaren showroom).

In many ways, I think this has been the best performing unit in this season’s side. There are a number of reasons for this. Firstly, I don’t think we can value the contribution Mikel Arteta has made quite enough. He’s brought stability and subtlety to a midfield which previously lacked responsibility and maturity. Largely due to his willingness to take on the workload, too often in the past the ball was simply shunted to Cesc Fabregas, whilst his colleagues cowered with their fingers crossed that Cesc could single handedly win the game again.

One also must take account of the fact that Arteta is knocking 30 years old and has vast Premier League experience. In the past, talented, yet erratic players such as Denilson and Diaby have been prone to the odd brain fart in the centre of the pitch. That’s not to criticise either Denilson or Diaby per se; inconsistency is just par the course with most players under 23. A phrase I often found myself muttering in previous seasons at Arsenal would be; “take the best option available to you.” A lot of young players don’t necessarily do this. 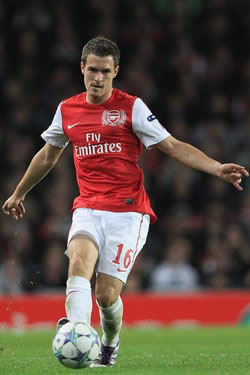 Think Theo when clean through on goal for instance. Passing the ball to a better placed team mate is often the best course of action, but not always. Yet Theo will always look for the pass regardless. He lacks the maturity to vary the approach according to the situation. Yet for Arteta the game is simple. If there is a team mate open, he passes to them. If a gap needs filling, he fills it. If a tackle needs to be made, he makes it. He’s the adhesive that holds the midfield three together. In fact, I can’t help but fantasise about how Arteta might have played alongside Fabregas.

But I think the other predominant reason for the positive displays in midfield has quite simply been the continuity. Song, Arteta and Ramsey have stayed relatively injury free thus far and have built up a run of games together. Each brings different qualities to that midfield three and once familiarity builds, then those qualities become harmonised.

Each player appreciates one another’s strengths. For example, in the recent QPR match, Arteta and Song swapped positions in the triumvirate. With QPR defending deep, Arteta sat at the base of the triangle and Song moved further forward; because he has the ability to beat players with his close control and to carry the ball forwards. A good team is a fluid team. In the age of Championship Manager and Sky Sports graphics, there is a tendency to fixate on rigid positions.

It’s ok for a defensive midfielder to make a loping run so long as his team mate understands he has to drop back to cover him. Arsenal’s midfield, by and large has achieved this synchronicity. At this point, I cannot help but hark back to an enduring image of 2009. Wenger tossed his jacket to the floor in disgust when Abou Diaby needlessly pushed forward in a North London derby we were already winning by two goals. Arteta’s presence has given him no such reason for sartorial gestures of vexation.

It’s for this reason that I think Coquelin to be a slightly superior option to Frimpong as our back up in the defensive position. I think he appreciates the need for movement better than Frimpong does. That’s not to say Frimpong doesn’t have a role to play. He does. As a muscle-bound enforcer, he has something of a niche in the Arsenal squad. Every squad needs a blend of different qualities.

At the head of the midfield trio has been Ramsey and, by and large, I think he has been very impressive. For a start, he has that burst of energy and injection of pace to carry him beyond defenders into the box. I am put in mind of Ljungberg in any ways and think that, eventually, he can fine tune that ability to arrive late and increase his goal tally a la Lampard. I think he can stand to work on his finishing. But I’m always relaxed about something like that because it’s easily fine tuned with practice on the training ground. It’s also worth remembering that he’s only a few days past his 21st birthday.

He takes some of the defensive load off of van Persie too because he presses high up the pitch. The next time the opposition rolls the ball back to their keeper, have a look at the man charging down. It’s not usually van Persie. Ramsey leaves him free to take up more dangerous positions. Rosicky too is a good option in this position. He’s not the devastating, rumbustuous player of pre 2008. But he moves the ball quickly and accurately. He speeds up our play in the final third.

Jack Wilshere was voted our Player of the Season last year. The biggest compliment I could pay the engine room is that I’ve not heard many opine that we miss him this year. Again, that’s not to belittle Jack in any way, a refreshed and reinvigorated Wilshere could provide a real boon for us as we get to the business end of the season.

This is where the assessment becomes quite complex. It’s not really worth me penning an appraisal of van Persie’s season. The English language only provides so many superlatives and I’ve exhausted most of them on him. But where the midfield has spread the load between themselves in Cesc’s absence (which is ratified by the assist statistics of Arteta, Song and Ramsey this season) that burden seems to have transferred from one part of the field to another.

The addition of greater pace in the front three through the acquisition of Gervinho has seen Arsenal become more direct. Now we get the ball forward quicker, with Walcott and Gervinho providing the injection of pace from the flanks. This means most of our play is funnelled through van Persie. The three have worked well together and provided a refreshing change from the chin stroking, uber slow faffing about that characterised Nasri and Arshavin at the back end of last season.

But I worry now that, where we once looked to Cesc to cut our meat for us; we’re starting to look to van Persie to do the same. There is almost that same sense of everyone expecting a miracle from him every time we’re in a grind. The goalscoring burden is too large on him. Walcott has showed signs of improvement in his final ball, but still only has 4 goals this season. 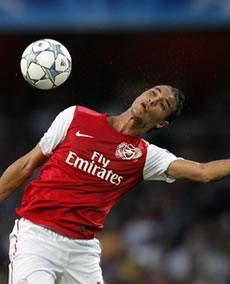 I have marginally more hope for Gervinho to relieve that burden though. The Ivorian’s finishing has been skewiff to say the least at times. But as I’ve said with regards to Ramsey, such deficiencies can be ironed out with practice on the training pitch. I worry far more about a forward like Chamakh, who doesn’t seem to be able to buy even a sniff of a chance. Whilst I’m beginning to wonder if Park Ju Young isn’t just starring in an elaborate episode of Channel 4’s Faking It.

Therein lays the biggest problem in our squad. There simply aren’t enough players contributing in the scoring stakes. Gervinho and Ramsey are getting the positions, but just need to work on their accuracy. But the back up to the skipper is miserably bad. Even when 4-0 up at the DW Stadium recently, the manager still played van Persie until the bitter end, not even considering Chamakh worthy of a punt at a confidence boosting goal. That tells you everything you need to know about his faith; or lack thereof, in his options.

I think the depth in wide areas is good. I like Benayoun, a busy, industrious player capable of a goal too. Despite his introspective sloping, I refuse to give up on a player as talented as Arshavin just yet. But we are desperately in need of reinforcement in the central striker role. If we all remove the mist from our eyes and the clouds of sentiment from our heads; we will probably realise that a 34 year old from the MLS isn’t the answer to this question. Frankly, if his name were anything other than Thierry Henry, people would be lamenting that Wenger had lost it.

The first choice forwards have performed well overall, but I think the continuation of that is potentially fragile. Put simply, to strengthen that resolve, there needs to be some work on finishing for some players and a little dip into the market required. In the wide positions, Benayoun, Arshavin and Oxlade Chamberlain between them represent good, varied options. In midfield, we have Wilshere to return, Rosicky kicking his heels and Diaby will be like a new signing when he gets his hips replaced. Upfront, we don’t have that kind of roster so it must be replenished. LD.