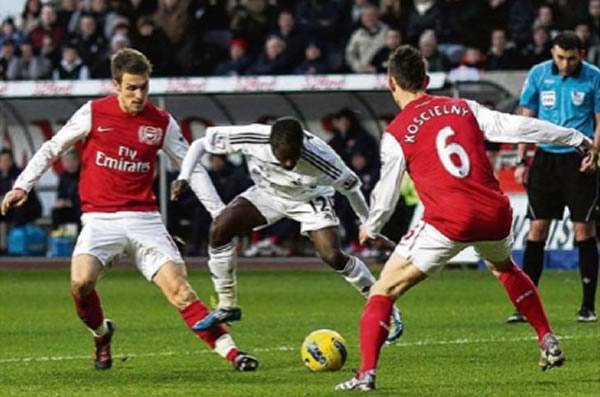 If defeat to Man City was as honourable as defeat can be, and defeat to Fulham as good an example of self-implosion as you’re likely to see, yesterday’s loss to Swansea is one in which we ought not to be churlish straight away and offer congratulations to our opponents for the way they played (in general). The home side play lovely football, it’s nice to see a newly promoted team with that kind of style and congratulations to them – they were excellent yesterday.

Nevertheless, it’s hard not to look at ourselves and our own shortcomings. When Robin van Persie put us ahead after just 5 minutes that should have been just the start we needed to kick on and really take the game to Swansea. Instead we found ourselves pegged back, and while I’m happy to compliment them on their football and their performance, I can’t feel anything other than aggrieved at the penalty decision.

That it came after a passage of play during which Benayoun was penalised for the kind of handball in the area that saw us denied a penalty against Wolves was one thing, but that Michael Oliver had a clear view of Dyer’s theatrics made it even worse. Let me make it clear – defeat yesterday was down to us and how we failed to perform, but I’m now officially up to my tits with the plethora of incorrect penalty decisions made by referees in our recent games.

Dyer dived, Dyer fouled Ramsey during his dive, and the ref gave a penalty. I know people are upset and frustrated with our team this morning, and with good reason, but top level football is a game of tight margins and when calls like this go against you they are costly. Scott Sinclair tucked away the penalty very well to make it 1-1.

At that point you’re looking for a reaction and while Swansea got on top we had a great chance to go 2-1 ahead. Robin van Persie had just the keeper to beat and if his goal was a masterclass in timing, I just felt he rushed this chance and made the save easy for Vorm. It remained level at half-time and we then started the second half brightly. Walcott had a shot when he should have squared it for Arshavin. Arshavin then had a great chance from the edge of the box which he put over the bar. Small margins again, but you expect a player of Arshavin’s experience and supposed quality to at least hit the target there.

And it was costly, as Dyver then scored for Swansea. Ramsey was dispossessed in midfield after what I thought was a careless, underhit pass from Arshavin. They moved it wide quickly to Dyver who got away from Song, into the box and finished to make it 2-1. They grew in confidence, passed the ball around fantastically well and bossed the game in terms of possession.

Arshavin and Benanyoun were hooked for Henry and Rosicky. It didn’t make much difference. Then Johan Djourou found Theo Walcott with a brilliant pass inside the defenders, and the only thing Theo did all day of any note was finish to make it 2-2. At which point we ought to have composed ourselves and gone after them for a winner. Instead our defensive shortcomings were exposed.

Ignasi Miquel, who I thought did pretty well for a raw centre-half at left back, pushed up, eager to win the ball back high up the pitch. Thierry Henry intercepted a Swansea pass, it went to one of their players whose pass into the space where the left back should have been showed the one flaw in Koscielny’s game as he played Graham onside. Wojciech Szczesny’s angles were wrong, Graham finshed to make it 3-2.

Yet even then we should have got something from the game. Per Mertesacker somehow clumped the ball wide from 6 yards out when a corner fell to him, Vorm saved from a good Ramsey head, saved again from Rosicky, then from Koscielny, the ref ignored Theo Walcott nearly having his head kicked off on the edge of their box, and in the end we couldn’t do enough to get the equaliser.

Afterwards, Arsene was very unhappy about the penalty decision, but said:

Our defensive performance was not good enough and that’s why we lost the game. I think we also missed some unbelievable chances that are very difficult to understand and explain. But apart from that, well done to Swansea, they played well and deserved the win.

Clearly we’re now struggling with the weight of no full-backs. It’s affecting us defensively and offensively although I thought both Djourou and Miquel did ok yesterday. Mertesacker was obviously not 100% well after being ill all week while Szczesny will certainly be unhappy with himself (and the defending in front of him) for the third goal.

I thought midfield was where we lost it though. People have focused on Aaron Ramsey’s performance and while I’ll agree he didn’t have a good game at least he didn’t hide like some of the players around him. Benayoun was anonymous all day, apart from giving away free kicks, while Alex Song had one of those games where he looks like he’s believing the hype and we missed Arteta badly. Walcott was woeful, bar his goal, Arshavin woeful bar his assist, and at this level you need players to produce more than a moment lasting a couple of seconds.

So on a day when those sort of shortcomings were exposed I find it hard to understand why the knives were so out for a player who at least tried to make things happen and who wasn’t found wanting in terms of effort or application. We can’t complain about lack of desire on one hand and ignore one of the only players yesterday to actually show some. Sure, not much came off for him but when the ball hits you right in the face and the ref awards a handball against you, you kind of know it’s not going to be one of your better days.

The weight of expectation re: Ramsey is a problem. And I don’t mean just from the fans perspective too. He is, essentially, being asked by the manager to do the same job as Cesc did for this team. And what Cesc did was carry it, game after game, he was the difference. Not once did he try to do it in his first full season back from a horrendous broken leg either. There’s a fine player in Aaron Ramsey but at the moment he’s weighed down by the lack of quality/effort around him and could probably do with a rest.

Up top Robin faded after his goal, the chance missed was one that would have drawn ire had it been another player but I think Robin’s earned the benefit of the doubt, and when searching for another goal Henry and Alex Oxlade-Chamberlain at least provided some hope from the bench. The youngster showed again that he’s got enough about his game for the manager to think about starting him – especially if he’s not going to make any purchases in this transfer window.

And now we come to that. The aftermath of any defeat provokes calls for investment in the squad. Buying players is not always the answer but, you know, sometimes it is. And I think this is one of those times. We now face a real battle for a top four finish. It’ll be tougher than any other season under Arsene Wenger and we’re trying to do it with a squad that is carrying too many players who are struggling to contribute for a variety of reasons.

Yes, I know we’re weighed down with injury – you could make a decent team with the players out injured yesterday but that’s not going to do us any good when it comes to our final league position. This is a team and a squad that needs a lift, it needs something to provide a spark and to provide a bit more quality. If we’re not going to use a player like Park, for example, why persist and why have him take up a place in the squad which could be utilised better? That’s not to single him out, I’m sure he’s a nice guy and all but he’s deadweight and contributes nothing – and that’s down to the manager, not because of any criticism I or anyone might make.

It’s hard not to be worried this morning and while I know it’s easy to look at our situation and think the worst I really fear what finishing outside the top four would mean for this club. A season out of the Champions League is manageable, if that’s all it is, but the knock-on effects of that are something else. Can you retain the services of Robin van Persie if we’re not in the CL next season? How does that affect then affect the quality of the players you bring into the team? The players who can get you back into the top four the following season are players who won’t want to spend a season playing in the Europa League (or not at all).

This is the danger we’re facing. And look, we could spend money in January and still finish outside the top four, but at least we’d be able to say we tried, that we didn’t just hope all our ducks would somehow end up in a row. There’s money in the bank and growing disaffection because of our results and performances. Under no circumstances should any football club spend money just because fans are unhappy. They should spend money to make the team better and to ensure that with the best use of our resources we finish as high up the table as possible.

If spending now affects our summer plans, too bad. I’m all for long-term planning but sometimes you have to react to what’s going on now. This is a team crying out for investment and if spending now brings about a top four finish then let’s deal with that in summer. It’d be a far better problem to deal with than the alternative.