Daddy took their T-birds away

Joy is a virtue that fast seems to be disappearing from football. I am in no way a misty eyed sentimentalist. Nor do I wish to fall into the trap of pining for a mythical past age, where the sun always shone, the players were your mates and when you could leave your doors unlocked at night and wake to find someone had come in and plumped your sofa cushions for you. That’s what nostalgia can do; it enlarges the good and photoshops the bad in a cloud of sepia.

Whilst I’m not old enough to profess first hand experience, I’m sure travelling to Stamford Bridge in the 1980s was no cakewalk. Players have only ever really been as loyal as contract law has permitted. In the days pre-Bosman and going back even further to the retain and transfer system successfully repealed by George Eastham in the 60s, the benefits and opportunities for club mobility were not as available. Loyalty has only ever shape-shifted to the permutations of legislation and finance.

However, I still get the impression the fun is slowly eroding from the sport. Supporters are guilty of forgetting the point of the pursuit in the first place. We live in a time when a 1-1 draw in a pre season friendly can produce sustained heckling and booing. A victory for your local rivals in a match your team has no participation in invites the acid tongued prophets of doom, astride their social networking soapbox. Victories are written off with an expectant shrug, mere numbers on a screen.

In part, this reaction is precipitated by the avarice of the sport itself. Large chunks of it are becoming quite joyless; the spectacle is reduced to little piggies grappling to keep their snouts in the trough. Memorable cup runs are eschewed in deference to relegation battles. Grimly hanging onto 16th or 17th or even 4th spot has become a pursuit of necessity in the greed is good game. Money does not so much talk, as prod, shout and bark orders. Existing is the new winning.

For these reasons I’ve steadfastly held on to my attachment to the F.A. Cup. Because, at least in its early rounds, it provides a measure of the random. Milkmen playing at Old Trafford, not knowing who you play until three weeks before the game, the opportunity to visit a different ground. It can provide some respite from trying to guess how many goals United are going to shellack past Wigan, or whether Barcelona are going to get 16 or 18 points in their Champions League group.

‘So why tolerate it?’ you may ask. Why continue to attend every game with robotic regularity? Well, nights such as Monday evening tell you why. Arsenal’s record goalscorer and favourite ever son returning home to score the winning goal from the bench. Every game is still capable of surprising you and giving you those moments that elevate you from the humdrum of day to day existence. A 3rd Round, Monday night Cup tie at home to lower league opposition shouldn’t have any right to provide such an epoch making moment. But it can. 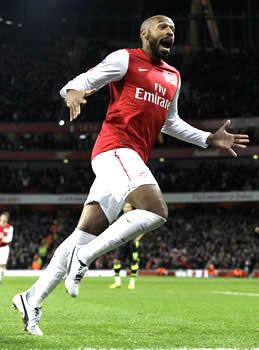 It defies script writing or soap opera, or voguish intonations towards ‘destiny’ or any other such claptrap because it’s all so possible. It’s what keeps us coming back. I was vocal in my doubts towards the re-signing of Henry and don’t get me wrong, it might all just have been a flash in the pan. He could yet score six own goals and set the training ground on fire before jetting back to New York in February, but that one stroke of his boot has already given us something that will live long in the memory.

Doubting the move to re-sign him did not take away one iota of my appreciation of the moment. I absolutely refuse to join those cunts that put their estimation of their punditry abilities above the team. You know the misogs I’m talking about. Those that slagged off Koscielny last season so refuse to acknowledge his excellent form. Those that wouldn’t so much as get to their feet if Squillaci scored a forty yard bicycle kick in the last minute of a North London derby, but would heckle themselves hoarse if he was spotted picking his nose. The game is supposed to be more fun than that and Monday night showed us it can be.

However, behind the romance and beauty of Thierry’s winner, it does beg a more serious question of our squad. Henry was seen as a superior option to Park Ju Young, whose backside stayed firmly planted to the bench. Chamakh’s approach play is actually very good. He screens the ball well and brings others into play. But he looks allergic to the penalty area. Without van Persie, Arsenal simply do not look like scoring. Henry’s introduction instantly showed us exactly what we don’t have elsewhere in the squad. That bit of movement that foxes defenders and ekes you out half a yard of space and the composure to finish.

We just cannot rely on van Persie or Henry to conjure a piece of magic in every single game. We face Swansea on Sunday and it’s going to be an almighty test. The likelihood is that we will trail Spurs by twelve points come kickoff. Swansea have an excellent goalkeeper and a good defensive record. We only seem to have two players that can finish their dinner. The Swans also channel their attacks through a couple of enterprising, attacking wingers in Dyer and Sinclair. We don’t have any fullbacks. We’ll need to be clinical and that responsibility comes down to more than two men (one of whom is unlikely to be able to manage 90 minutes).

Elsewhere, Arsenal have signed Francis Coquelin on an extended contract and I consider that very good news. I must confess I’d almost forgotten all about him following his loan spell at Lorient. But I’ve been incredibly impressed by what I have seen this season. But it was interesting to note that the extension is reportedly for three years. Given modern contract law, that essentially means his terms are up for review again at the end of next season. This represents something of a departure from the usual “long term contract” we have seen in the past with Arsenal’s up and comers.

Whether that’s down to Coquelin reserving the right to reassess how many first team chances he gets, or whether it’s a shift in the club’s policy is open to conjecture. It could be that, having seen the likes of Denilson and Bendtner paid on the basis of potential never fully realised, or with Abou Diaby spending the vast majority of his £60k a week long term deal in the treatment room, a rethink has been ordered. Maybe the club are waiting to see how Coquelin flowers before committing him to a contract more commensurate with that of a first team regular remains to be seen. Something to park and ponder though, nonetheless.