Last week I touched upon our feeling as supporters around the squad; how the bonhomie appears to have improved. This both between the players and according to the respect that radiates out from fans compared with six months ago. I met little opposition to the supposition that the supporters were more tolerant with this more experienced roster than last year’s.

So over the next two weeks, I’ve decided to examine further. Where is the current squad? How have they performed with the season approximately at its half way point? Over the next fortnight I’ll undertake an in-depth, two part interrogation on the contribution of the squad so far this season; taking into account individual displays as well as an appraisal of the team as a unit. For this reason, I’ll split the review into four parts; starting this week with a forensic look at the goalkeepers and the defenders.

It’s difficult to believe that just 18 months ago; one of the most popular caterwauls, from press and supporters alike (though 99% of the time, one begets the other) would have had you believe cosmetic surgery was required in the goalkeeping department. But since his installation into the team at the beginning of 2011; the belief of the supporters in Wojciech Szczesny has been total. In fact, our conviction in him is only outstripped by his conviction in himself.

His supposed eccentricities make him a popular character – both in the dressing room and in the stands. Though leading the away support in song, kissing his captain’s boots and his hybrid cockney Pole burr help aid the cult of Szczesny, there really is more to it. The English, as a general rule, don’t like self confidence. We think it unbecoming and unseemly. (Which I think, partly explains why we tend to explode like rat bags in most sporting contests, but that’s a different story).

With Szczesny I think we appreciate the differences. There’s a measure of self deprecation in there too; which suggests he analyses his mistakes without just blindly championing his ability. Following his Premiership debut at Old Trafford, he immediately took to Twitter to say, “I think I’m going to have to work on my kicking!” He was clearly true to his word too; because now his distribution is faultless. For a side like Arsenal, this is a crucial facet for a goalkeeper.

Arsenal build attacks from the back and Szczesny is able to aid that with his calm distribution. It’s become a feature of matches now for him to control a backpass and coolly chip an inch perfect pass over a closing striker and to the feet of his centre halves. It’s difficult for some to give credence to the importance of a keeper that is good with his feet, even some 19 years after the backpass law was introduced. But Ferguson even put de Gea’s ability with his feet as one of the reasons he parted with 20 million big ones to secure his services. 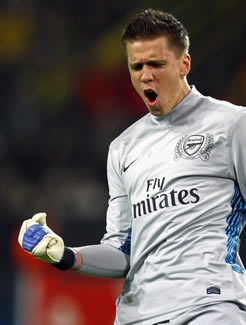 Szczesny has presence in abundance for sure, but presence counts for precisely jack shit if you haven’t got the ability to compliment it. There has been a catalogue of excellent stops from the Pole in the Goal this season. The close range reflex save from Cattermole, the sprawl and save at the feet of Balotelli, the gravity defying claw away from Danny Graham’s header and my personal favourite, the high fist away from di Natale’s penalty in Udinese. All were important stops in tight games.

In a couple of the aforementioned examples, they were the only work he had to do in the entire game. Another urgent quality for an Arsenal goalkeeper. This is what separates Wojciech from a goalkeeper like Manuel Almunia; whose better performances came in games where he was busied- think Barcelona and United away in Champions League encounters. Szczesny might only have one save to make in 90 minutes; more often than not, he makes it.

Szczesny’s game has improved markedly in his decision making from crosses- as you’d expect now he has 50 Arsenal appearances under his belt. Work has clearly gone in on the training ground here. From the opening day against Newcastle, it was clear Szczesny’s aim was to be a decisive goalie; making decisions early and sticking to them. Fear and hesitation are deadly bedfellows for a Premier League custodian.

When Szczesny leaves his goal line, he’s out quickly and early. As with his distribution, this will occasionally lead to mistakes. But compared with a goalkeeper like Shay Given, whose reputation is built upon his refusal to make decisions that might lead to mistakes, he’ll save us infinitely more than he loses us in the long run.

My only concern with him at this stage is that his Schmeichel-esque sprawl in one on one situations leads to many strikers putting the ball through his legs – many of his goals have been conceded that way. But that really is a minor concern. In fact, it’s probably a concern borne of one of his biggest strengths. In seemingly hopeless situations; make yourself as big as possible and play the odds.

Many would argue that the performances of Fabianski and Mannone in turn in Athens demonstrate a lack of quality back up. In truth, I don’t think clubs around us have an awful lot better on the bench. I’d argue any top side that has a genuinely top quality goalkeeper on the bench probably has a keeper that lacks ambition. Or else they have a questionable number 1 that leaves the deputy with a glimmer of hope for playing time.

Another area of the squad that appeared to be positively weeping for improvement, which has slowly improved. There are a number of factors for this. Firstly, I think there are more mature, responsible players in front of them. The team ethic towards defence has greatly improved with the likes of Arteta and Benayoun arriving. There’s also the replenishing effect of having a trusted goalkeeper behind them.

But largely I think it’s just down to an improvement in personnel. Thomas Vermaelen was injured for the whole of last season and, being a world class defender and a leader, his presence has had a rejuvenating effect. (Dare I say he’s been like a new signing?) Then we have the improvement in Laurent Koscielny who seems to be undergoing a Robert Pires style flowering at centre half. That is to say, a fairly impressive first season with glimpses of real quality, followed by a metamorphosis into a world class performer in his second.

Then there’s the addition of Mertesacker. There have been hiccups, as one would expect in an acclimatisation period. But put bluntly, whereas last season we looked to Squillaci, this season we call upon a centre half with 80 caps for Germany. Mertesacker has fitted into the ethos of Arsenal’s new defence, which appears to be built on early interceptions. Vermaelen, Santos and especially Koscielny, are very adept at nicking in front of an opposing striker and beginning an attack with Arsenal on the front foot.

I think this has suited Mertesacker, whose quality appears to be his reading of the game, enabling him to perform the “mop up” function. This is why Santos has also been a quality addition. For an attacking side like Arsenal, defending on the front foot is important because it allows you to quickly start attacks. Santos looks to be an upgrade on Clichy to me because of what he adds going forward. This piece from Arsenal Column expands on that brilliantly.

I think there has been something of a revitalisation in the defence because there’s a slightly different attitude. Put simply, there’s more pride in the art. The likes of Koscielny, Vermaelen, Sagna, they’re defenders that love defending. They relish the prospect of putting their bodies on the line. For too long I think there’s been a laissez-faire attitude at Arsenal that defence was simply a necessary evil. Now I think our current backline actually enjoys it.

There are still some kinks to work out, sloppy goal concessions of late to Aston Villa and Wolves say as much. But I don’t think any of us fill our undercrackers with effluent every time the opposition is awarded a corner. (Well, possibly less than we did in the spring anyway). Our recent injury curse at full back has inevitably upset us too I think. But I have very positive vibes about the current defence and I think it will only improve as the cohesion increase- as it will with games.

With everybody fit, we have competition for places in defence possibly for the first time in Wenger’s reign. The vital thing now will be keeping them together; Arsenal are finding out more than anyone how hard a task that is in the modern game. Quite enough chin stroking for this week. Next week, I’ll analyse the contribution- or lack thereof- of our midfielders and attackers. Until then, toodles. LD.