Not so euphoric with a touch of historic

Last week, this column rather took on the personality of a stranger hugging, gurning young gadabout; imploring all fellow dance floor dwellers to “let the beat take you higher, man.” With two rather lukewarm results since that mini era of jaw flapping euphoria, it’s fair to say this week has been something of a comedown. Not quite a faint wave of nausea coupled with a crushing sense of worthlessness. More a day of pyjamas, peanut-butter on toast, shit telly and questionable flatulence.

The Fulham and Manchester City results were disappointing without being alarming. The team has earned enough kudos with supporters over the last 6-8 weeks that these slight setbacks weren’t greeted with a grinding of teeth comparable to that seen in underground car parks at 5am on a Sunday. The draw with Fulham was, I think, a direct consequence of a hard fought victory over Borussia Dortmund last week.

I wrote last week that the next segment of the season would see our squad players called upon to prove their worth. Though the manful performance against City shows promise from some areas of the roster, I think I maintain concerns about one or two of those a bit nearer the fringes. Andrey Arshavin for instance has gone all Austin Powers on us in the last 18 months and just done lost his mojo. There could be any number of reasons for this. 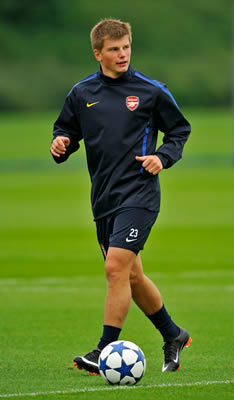 Arshavin is, by all accounts, something of a moonchild. For all his cheek pinching, hair ruffling, diminutive charm, he strikes me as a very insular and reflective character. In interviews, he is usually full of self deprecating honesty. It could be that Arshavin is a personality that becomes paralysed by self doubt in these periods of ennui and that manifests itself on the pitch. By nature he is a player that takes risks, that tries the tricky through ball or the shot from a tight angle. If your self belief tank is running on empty, that can translate into sloppy execution.

But aside from the speculative, cod psychoanalysis, it’s also been put to me that Arshavin is simply a very talented player that made his move to the Premier League too late. He arrived on these shores at the age of 28, fresh from a Zenit side catered to his strengths in the less demanding Russian league. It could be that that he arrived at an age where he’s found it difficult to adapt to no longer being the main man.

Meanwhile, the City game showed us what we’ve probably all suspected for some time. With January fast approaching, I certainly think there’s a deficit in the “in case of emergency break glass” striker role. Marouane Chamakh’s play outside of the penalty area is actually decent. I think he works hard; he holds the ball up well and brings others into play. (Park’s close range miss on Tuesday came about as a result of a fine piece of hold up play by Chamakh).

But anything inside the penalty area and he looks about as much use as an inflatable dartboard. It’s not unfair to expect more from Arsenal’s number 2 centre forward and his slump in form has lasted longer than the extended Director’s Cut of Apocalypse Now. Conversely, the African Nations Cup in January might do him some good if it means he can string some games together and perhaps grab a goal or two.

The difference in the City game hinged on a piece of quality from City’s £65m cartel upfront. Whilst I wouldn’t venture we should expect deputies of that quality or price, we do need to go some way to servicing the gap. Many I know were prepared to write the City match off. I can understand this; we were probably all expecting defeat. I take no issue with the team selection or the fact that the League Cup is very much 4th on the list of priorities or the performance. But I don’t think that precludes it from being any sort of priority whatsoever.

Realistically, with the petrodollar king in England and with the Spanish duopoly benefitting from uneven fiscal opportunities, the League Cup and the F.A. Cup are the only two trophies which Arsenal are in with a strong chance of winning. In retrospect, my disappointment at tumbling out of the League Cup is more pronounced now that Chelsea and, more surprisingly, Manchester United have been knocked out. I don’t tend to view the cup competitions as disposable as I used to when Arsenal were guaranteed to be tied up in a title race every year.

Cup competitions can sometimes open up for you and this one looks to have been blown wide open for City now. I know we felt we were in a similar position last year and it wasn’t quite to be. But painful Cup Final defeats are an occupational hazard when you compete in a lot of them. Nevertheless, however offended you are by the phraseology, the truth in the modern game is that finishing in the top 4; whilst not a trophy in the literal sense; is a greater priority.

Moving on and it was interesting to see some typically effusive comments from Wojciech Szczesny this week. The Pole in the goal spoke about changes in the approach to defence in training. Whilst I’m sure a freshening of approach was probably necessary and certainly appears to have paid some dividends, there might be some other, simpler explanations for the current back four not quite making you want to fill your M & S Y’s every time the opposition cross the half way line.

Better players for one. Vermaelen was injured for the whole of last season. Koscielny has a full season under his belt and we are seeing the fruits of his flowering confidence. We’ve also signed a big fucking German. One with 80 caps for his country. I realise the BFG has had a few Silvestre moments, but the value of competition can never be underestimated.

Koscielny for instance is in the form of his life right now. But he knows if that form arrests for one or two games, the lanky spectre of Mertesacker looms over him. We also have a better goalkeeper. Lest we forget, this time last year, Szczesny had yet to make his Premier League debut. His influence has gradually been able to take a hold of the back line, with his cockney-Pole burr ringing in the ears of his troops. Greater maturity in the team helps as well- with the likes of Arteta, Benayoun and Rosicky imbuing younger charges with that work ethic required to defend as a unit.

As blogs mentioned this morning, 1st December marks Arsenal’s 125th birthday. Some historians attribute the date of our formation to Christmas Day, 1886. But records show the munitions workers of Dial Square had already played their first game on December 11th, 1886, a 6-0 victory over Eastern Wanderers. (I wonder if the Eastern Wanderers fans were bombarded with telegraph spam containing a collection of shit puns on the number six).

On Christmas Day, 1886, Messrs Danskin, Humble, Watt, Beardsley, Pearce and Bates did meet to determine the team name, the home ground and to try and sort out some kit. Anyway, it’s a significant milestone and one can’t help wonder what those men would think if they could take a peak at the corporate behemoth they created in its current incarnation. If you want to read a bit more about how the club were formed and that cold December day in 1886 (I presume it was cold. It was December, it was England, I hardly think the Arsenal forefathers would have been scheming in an unseasonal heat wave), then I wrote this a couple of years back.

O.K. I think that’s enough jibber jabber from me for one week. I hope to see many of you over a hogshead of ale and a snifter of scotch at next Wednesday’s book launch at the Tollington. Until then, if you could continue to keep it as Goonerish as possible, I would be most obliged. LD.

Previous article125 not out as the madness begins again
Next articleGoals, defending + Arsecast 218