In the absence of real news, as the Interlull takes hold rather more quickly than we might have liked, I am very grateful of the chance I got yesterday to visit Arsenal.

I took a CattleAir flight, was very kindly picked up and dropped off at the training ground by Lewis Hamilton’s driving instructor where I met Tom (from Arsenal). He showed me where the boss does his press conferences before ushering me into a room where ‘the other gentleman’ was waiting. Gentleman, indeed. It was none other than Goonerholic whose piece you should read to give you some background and insight (and which will save me writing all the same stuff).

Basically, we were there to be given a tour of the new medical centre, and the existing training ground, by physio Colin Lewin and club doctor Gary O’Driscoll. We began with a tour of the new facility, finished just a couple of months ago and for which the guys were given a blank canvass. Whatever was required would be provided. This meant trips to see what was being done elsewhere, particularly in the USA where they visited teams from the NFL, NBA, NHL, Major League Baseball etc.

The variety of injuries suffered by athletes from those sports is obviously very different. Some sports are much more physical, with a lot of impact injuries, others not so much but playing on hard surfaces might affect tendons/joints. It was viewed as a way of benchmarking the club’s own facilities against theirs and we compared pretty well in terms of methodology and equipment, the main difference was they had the space to treat these injuries better than we did.

Before the new medical centre was built things were a bit cramped. The gym, which was huge and state of the art 10 years ago, is now too small to deal with up to 50 full-time players. Trying to do one on one rehab with a player while there others milling about, working out and generally being distracting wasn’t ideal. The new building is only for players suffering from injury or receiving treatment to prevent injury (which is a huge part of what’s going on).

Maybe it’s the time of day we were there but it is quite calm, there’s a bit of a new car smell to it, but when Colin and Gary showed us the space they were working in in the old building you can see how this is going to benefit them, and ultimately the players, as time goes by. In the doctor’s office the cabinet full of over-the-counter drugs required by the players was amazing. Each one comes with his own favoured, local remedy, the club now has to provide information about which player takes what, when he takes it and how much of it.

A question about whether or not the new pitches are a contributory factor to injuries wasn’t conclusively answered. They are slightly harder but if they do cause a bit more strain on tendons, muscles, this is generally offset by the fact they are like carpet, uniform and smooth, thus cutting down considerably on ankle injuries picked up on bockety pitches. The general consensus was that going back to the older pitches would be very much a step backwards. 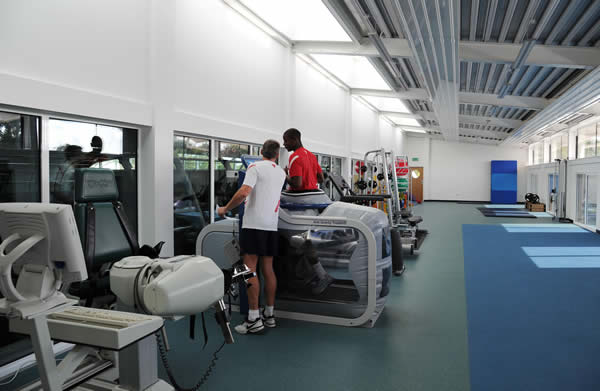 Upstairs there’s the rehab area. The equipment is fairly standard but the anti-gravity treadmill (above) looks amusingly great. You get into some special shorts, they then seal the shorts to the machine, air is pumped in to reduce a player’s overall bodyweight so it becomes the perfect way for a player who might be suffering from an injury they don’t want to aggravate with the impact of running to maintain their fitness. Keeps the cardio up and the impact on the injured knee or ankle etc down.

As well as that, as holic has pointed out, other ‘services’ are available to players throughout the week. From Yoga (there’s a decent take-up apparently) to podiatrist, osteopath, psychologist, nutritionist etc, all of these things are there if they want them. They’re not forced to do them but they’ll be told ‘This would be good for you, you should think about doing it’. Most are receptive to these suggestions, some ultra-professional and will do whatever they can to maintain their fitness.

From there we saw the ‘old’ building and being in the first team dressing room was a bit cool. Even though it was free of players it was easy to imagine the place full and buzzing before training. There was the massage area where players put their names down for a rub-down pre or post training. A white board keeps track of where they might need work. It’d be safe to say that a dressing room joker was at work when he scribbled that Robin van Persie had a ‘tight anus’.

We saw the treatment rooms, the pool with the movable floor, the ice-cold plunge pool, the gym and sadly it was too dark by the time we’d finished to see the training pitches but there you go. Afterwards the two guys were quite happy to answer questions about treatments, procedures and how they operate. On one hand it was no less than I was expecting – as others have pointed out time and time again these are guys with letters after their name for good reason, and the letters aren’t LOL – but on the other I was quite taken aback by the astonishing attention to detail.

The monitoring of the players is ongoing from ensuring they remain hydrated at all times, to the pre-season check-ups which specify which areas they need to work on, to post-game/training recovery which includes everything from protein drinks to ice-packs, massages (some players love them, others are not comfortable with them at all!), and then a constant line of communication with Arsene Wenger about each player.

When you’re there and it’s being explained to you in such detail it makes so much sense. And yet there is the other element – that of a fan wanting to see the best team out at all times. As Colin Lewin asked, “If we played Robin van Persie against Marseille, he scored and won 1-0 but then he got injured, is that a success? He then misses West Brom and then what?”

As much as the medical team is about treating injuries, a growing part of their job is prevention of them. It might mean nursing a player through a little strain or an ache, but a lot of it is to do with knowing the players, seeing when they might be approaching that ‘red zone’ and then advising the manager of that. If he plays in this particular game then he’s at greater risk of one of those strains/aches turning into something more serious. It’s not something we can see from where we sit but three games a week takes its toll on any body and that’s got to be taken into account.

Ultimately the decision lies with the manager, sometimes he takes the risk, and we’ve seen how that has gone in times past. Cesc’s Aston Villa cameo a great example. Arsene knew Cesc was in the danger zone but we needed him. He came on, scored two, won the game for us and then went off injured again and missed another three weeks. But we needed those points. It’s a double-edged sword in a way. Of course having a strong squad is one way of making this part of the job a lot easier. If you have another striker, for example, who you can rely on to be effective then do you need to play Robin so much that he’s approaching that danger zone. That’s something that’s down to the manager, there’s nothing the medical team can do about that.

Another factor is the simple human element. You’re dealing with young guys who want to play, who will try and run off injuries in games, and who won’t be as forthcoming as they should be about the pain they’re in simply because they love football and they love being out there. That works both ways too, while there are players who will play on when they shouldn’t, there are (very occasionally), others who will suggest they’re a bit more injured than they actually are because they don’t fancy a game. Again it all comes down to knowing the players and Gary O’Driscoll reckons that in time there’ll be more science to it than there is at the moment, making everyone’s job a bit easier.

All in all it was very impressive, which I’m sure is what the club had it mind when they extended the invititation (and I believe others will be taking the same tour over the next couple of days). The perception of our medical record and the care received by the players has been a running, if slightly tongue-in-cheek, joke amongst Arsenal fans. We’ve had some problems, no doubt about it. One season dished up seven fractures when a typical one might see one or two maximum. The injuries suffered by Rosicky and Vermaelen, for example, were so rare that they are now the subject of case studies, and there are certain players who have had ongoing issues which have contributed to the overall view of things.

From what ‘holic and I saw yesterday though this is a club with fantastic resources determined to ensure our players receive the best and most effective treatment at all times but also to become a leader in its field. You don’t often get a glimpse behind the scenes as in-depth as that and it is both eye-opening and fascinating.

Thanks to Colin Lewin and Gary O’Driscoll for their time and to Tom at Arsenal for setting it up. Sadly there was no time for me to undergo and fail a medical but you can’t have everything.

Behind the scenes of Laurent Koscielny’s comeback