Contractions not too far apart

What ho Arsenal fans? After two weeks of wandering in the interlull desert, with only the horse flies that feast upon our vapid flesh for company, a light twinkles on the horizon. Norwich be thy name! I can almost feel that 9am train beer (is there a better kind of beer?) slinking seductively down my gullet and slaking the thirst.

A short executive summary from my keen eyed scouts out in the field (Twitter, then) suggests our players have come back unscathed. I myself tore some knee cartilage in a feisty eight a side game last week. I like to think of this as my sacrifice to the injury Gods, which has sated them sufficiently. Seriously, you’re welcome. There’s no telling yet what ramifications the arrest in domestic football has had on our momentum, but this most annoying and pointless of interlulls seems to have been good to us on the surface.

But seriously, did you see the aggregate scores for the Euro playoffs? 6-2, 6-1, 3-0, 3-0. What nail chewing tension that fucking circus provided. If you want playoffs to be exciting, stop seeding them. If you want to protect the bigger teams and ease their passage into the tournament, do away with the playoffs. Half empty stadiums in Paris and London for supposedly illustrious friendlies show the authorities are being ruthlessly exposed for international fixtures. The spectacle is being diluted to bloat the calendar in the interests of pure greed.

We did however witness a rare vestige of common sense amongst the self important bollocks that usually plagues the international game. Dutch coach Bert van Majwik sent Robin van Persie home in a jiffy bag lined with cotton wool, excusing him from the thoroughly pointless engagement with Germany. It stands to reason that van Persie is central to the concerns of every Arsenal fan at the moment, his wellbeing, as well as his contract will continue to be headline news for the next six months. 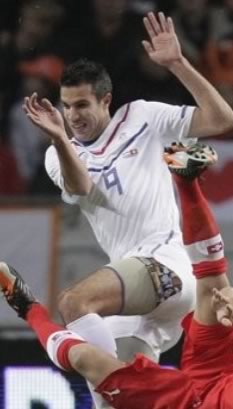 His contract probably isn’t as cut and dry as we would all like to think. On the basis of van Persie’s current form, I don’t think there’s a single one of us that wouldn’t saw off our own arms and throw them into a huge bin liner if such a request were to come from his agent at the negotiation table. However, for the club it’s a trickier proposition. Robin will be 29 in the summer. There is no sane individual in the world that would argue against him being made the club’s highest paid player by a street at this point.

But his next contract would take him to the age of 33 or 34. Is Robin going to be worth £150,000 a week to us at that age? In the past Arsene has liked for a player’s contract to take him to 32 before negotiating a series of 1 year deals thereafter (not 30, as the press often misreport). But that policy has altered as the shackles have come off financially. Thierry Henry renegotiated his contract at a similar age to Robin. He signed on and famously, in what turned out to be his last season, Henry cost us in the region of £12m for a campaign in which he produced 27 appearances and 12 goals. Barcelona then swooped in for his sciatica riddled hiney at a knockdown price.

I’m not suggesting we shouldn’t sign van Persie up. But the club will have to give weight to such considerations. Given his age, this season and next are likely to be his best ever. However, beyond that there’s a chance we could witness a decline. Such is the cruelty of nature. Will those injuries have taken their toll on his body by then? The club essentially has to judge whether that sort of salary will be worth plundering into the account of a 32 or 33 year old van Persie, or better spent sourcing a quality replacement with less miles on the clock.

Given the guy’s current form and popularity, I am sure many of you will read open mouthed at such blasphemy. But the club have to deal in that cold, hard reality. And baby, sometimes reality is a stone cold bitch. One could make a case that the contract of Theo Walcott is actually more decisive for the club. Theo’s next deal will probably take him into his prime years. After a good deal of investment we are beginning to see a player that is increasingly dangerous and productive. I know there are times when young Theo can frustrate the living shit out of you when he trips over his own feet.

But there is not one defence anywhere in Europe that enjoys playing against him. He changes the way teams play against us. I think Walcott’s contract will centre less around fiscal terms and more around his role in the team. Every reporter with a microphone has heard from Theo that he sees himself as a striker. The thing is, I don’t. I think he’s still some way off performing that role at a high level. Many deduce that his speed plus his excellent finishing equates to him being the ideal striker.

But I just don’t see the intelligence in his movement yet. I think his runs from the flank can be devastating. Largely because he can cause confusion between full back and centre half as to who should be picking him up. He makes huge gains in that corridor of uncertainty. Playing more centrally, Theo would be minded by bigger, keener centre halves. He would have 1 possibly 2 men on full time Theo detail.

I can’t see him coping with that. A centre forward also needs to be able to play with his back to goal, to bring team mates into the game. Can Theo find that tiny pocket of space in a crowded area for the pull back, the way in which Robin can? I have my doubts. There’s so much more to a striker’s game than running and shooting.

But I think he’ll want certain assurances that he’ll get a chance to play in his favoured position. Having wet nursed him through some frustrating times to turn him into a threatening wide man; does Arsene have the forbearance or the wiggle room to mould Theo all over again? But one thing’s for sure, Arsenal cannot face another summer where the futures of two of their better players once again decorate our consciousness.

We’re suddenly a more threatening side from wide positions this season. With Gervinho adding dynamism upfront. Two full back signings have potentially added some explosiveness into the mix too. Carl Jenkinson has an engine like a Boeing 747 allied with an impressive crossing ability. Andre Santos is certainly an improvement on Clichy in attacking terms. The two goals he has already registered for the club demonstrate that he has a knack for finding space in the final third.

For all of his qualities, would Clichy have exploited that acreage of room vacated by Bosingwa at Stamford Bridge? Doubts still abound over Santos’ defensive capabilities, but I believe they can always be taught and learned. Arsene managed that much with Clichy himself and Cashley before him – both of whom were enterprising full backs whose defensive games improved over time. But attacking instinct is much more difficult to instil into a player.

O.K. That’ll do from me this week. My sources on the grapevine (errr, Twitter again) tell me the Compleat Angler is the away pub of choice pre Norwich. Hope to see some of you there and, indeed, inside the Delia dome. Peace. LD.