Since last we spoke, tyrannical dictators have fallen, The Stone Roses have reformed and The Arsenal have enjoyed two hard earned, late victories. Carlsberg don’t do weeks, but if they did, they’d probably taste like watered down, fizzy piss. There’s been nothing unsatisfying or indigestible about either of our victories however. There has been more than a degree of ugliness to both; but at this stage, winning ugly knocks seven shades of shite out of losing pretty.

In fact, I don’t think I much care if our wins for the foreseeable future are positively fugly. They can all look like Iain Dowie for all I care and I’ll happily wine and dine them as if they were Monica Bellucci. I’m a total slut when it comes to Arsenal victories. Having only arrived home from Marseille on Thursday evening, I’ve not really collected my thoughts on that game in any coherent fashion yet (bloody red wine), but torturous as it was to watch at times, there are huge positives to be gleaned.

Firstly, hopefully the team learned the value of keeping their fingers away from the big, shiny red self destruct button. Even in our most impotent game offensively, you’ve always the feeling that Arsenal can score. The solidarity shown in France was largely down to a couple of impressive performances from Mertesacker and Song, but Laurent Koscielny in particular.

Koscielny is a player I’ve found myself defending with regularity, but I think he’s the sort of centre half Arsenal have missed in recent years. One that just loves defending. Intercepting, challenging for headers, throwing his goolies in the way of a fulminating shot, he loves all that old palaver does our Larry. There may be some truth that his best performances for Arsenal tend to come in European competition and I’m sure Stoke will throw up (or throw in) a different challenge on Sunday. I think, much like the pre Krispy Kreme Kolo Toure, with a commanding presence alongside him he can be a world beater. 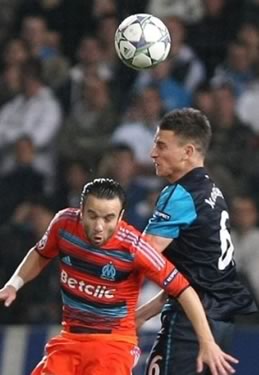 Mertesacker and Koscielny has looked an increasingly promising partnership. As I mentioned in last week’s blog, understanding is hugely important in football. Of the back five that started on Wednesday, none had made a senior appearance for Arsenal as little as 18 months ago. But I think Wojciech Szczesny has been a crucial factor in a back line that is showing tantalising hints of improvement.

Once again during the Sunderland match, he was called upon to make one save and one save only (if you accept Larsson’s free kick would have flummoxed any goalie) and he duly produced with a point blank stop from Cattermole. Goalkeepers at clubs such as ours rely on that extra piece of perception and concentration that your Tim Howards and your Shay Givens just don’t have. As the Arsenal players celebrated Ramsey’s winner beneath us in the away end, Szczesny raced from him goal, yelling at his players to concentrate and focus. It makes a big difference for centre halves when they know they can trust their custodian.

However, the victory probably owed as much to the fact that Marseilles are in a bigger funk than we are. They’re in a funk so funky even James Brown himself would retire to his sleeping quarters reaching for the Nurofen and a hot water bottle. It rather manifested itself in their impoverished attacking performance. The vigour with which the Arsenal players celebrated at the final whistle suggests the late victory has given them a bit of a boon, but I think we’re all hesitant about declaring it the panacea to our ills.

A word for Aaron Ramsey too who notched the winner. I make that two goals and 3 assists for Ramsey so far this season, not too shabby for 754 minutes play. Ramsey’s goal revealed exactly what we missed about his presence in the 78 minutes building up to his introduction. Rosicky is a fine player with the ball at his feet, but he no longer seems capable of making those lung bursting runs into the box and van Persie was incredibly isolated as a result.

When Ramsey came on, Rosicky moved to the flank and Rambo was present in the penalty area to bury the chance when it arrived. It appears to have escaped people’s notice that Ramsey is effectively playing in Cesc’s more advanced role in the midfield three, with Arteta sitting deeper. I can only think that’s because people haven’t really scratched the surface any deeper than “Fabregas left= Arteta came in.” But the numbers suggest Ramsey is getting to grips with the role. Given the rather lukewarm appraisal he’s had this season, I think it’s a point worth bearing in mind.

It was interesting to hear the manager say that he would try to use Ramsey as sparingly as he could in his post match interview, citing the injury to Jack Wilshere. It must be said that it came across as an admission of guilt on his part over Jack’s injury. But this shows us where a manager really can’t win. With Fabregas’ hamstring banjaxed for much of the second half of the season, can you imagine the ire from Arsenal fans had Wenger taken Wilshere out of the line up? Particularly given the way results were. I suppose therein lies the lesson, Arsene is trying to lighten the load on Ramsey now whilst he still has the players to cover.

Having already touched on the twin themes of fitness and players that are performing, it’s perhaps felicitous to acknowledge Thomas Vermaelen’s contract extension. Following a summer of anxiety over players leaving, it’s something of a relief to see one of our best players and one of our leaders tied down. Still, I can’t have been the only one that thought, “Cripes alive, probably means he knows he’s injured until Spurs next win the league.”

I think people may have jumped to the conclusion that, by committing Vermaelen now, Arsenal have learned from where they erred last year and acted more quickly than they did with Nasri. But the truth is, Nasri was offered new terms well in advance of last summer. That means the uncomfortable truth is that terms will have been offered to Messrs Walcott and van Persie by now, but they’re biding their time.

That’s fair enough and shouldn’t really come as a massive surprise to anybody. But you know how sensitive and entitled some football fans can be. Whether both are holding out for better terms (from us, or from other potential suitors) or whether they’re waiting to see what happens on the pitch is anybody’s guess. But questions may well be asked about Arsene’s equilateral wage policy. If Robin van Persie were to make a case to say he should be the best paid player at Arsenal by a fair distance, I don’t think many of us would be waving our copies of Das Kapital at him in protest.

Anyway, quite enough of my wittering for another week. Next Thursday I shall be attending the AGM and will of course dedicate the next column to disseminating my findings. A big bottoms up to those of you I met in France this week, do lend the team your lungs with the same vigour on Sunday and again on Tuesday in the hope that we again sate our salacious appetites for victory. LD.

Previous articleRight back an issue + Arsecast 213
Next articleSaturday round-up