Ordinarily, I avoid the superficial, Sky induced hype of Deadline Day in the same manner that I’d give a live railway line a wide berth. The gurning, buckteeth boys leering swearily behind Sky reporters (shouldn’t you unruly yoots be looting JD Sports or something?), the strains of Jim White unloading his cargo as Jimmy McJourneyman completes his lucrative loan move to Hamilton Academicals. Not my scene at all thank you very much.

Married to that the fact is, deadline days are usually rather painful affairs for Arsenal fans. Traditionally we either beg listlessly for the end of a drawn out saga, or else look on wistfully as Arsene closes the wallet. Usually on the basis that “once Tomas Rosicky gets his hamstrings replaced he’ll be like a new signing.”

But Wednesday evening was slightly different. We all knew that Arsene would be stationed in the aisle with his trolley, heading the mad Christmas Eve dash. I have to say, I strapped myself in for the white knuckle ride and ended up rather enjoying it. Much in the way a drunken man will happily prance around a dance floor to Black Lace without a hint of remorse.

I won’t rehash the ins and outs of the deadline day, or indeed the summer because I’m sure you all know full well what went down and when by now. And if you don’t, frankly, what the fuck are you doing reading this? I’ll come onto our overall transfer strategy for the summer shortly, but in terms of the five deals we struck in the last 2 days of the deadline, I have to say I am pleased. 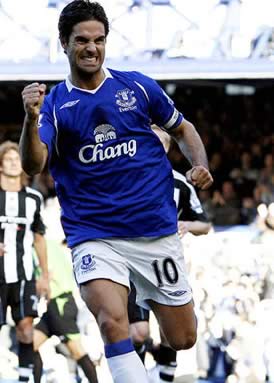 Arteta is the headline deal here. I think the reaction to his signing has generally been good. He’s established Premiership quality and a creative edge we were clearly lacking. With Benayoun supplementing him, I think, eventually, we have got it spot on in replenishing our creative options.

We are the Sky Sports graphic/ Championship Manager generation, so some look at Arteta as a like for like replacement for Fabregas and are underwhelmed.

However, the reality is not that simple. A like for like Fabregas replacement doesn’t exist. If he does, he’s out of our price range. The only 2 central midfield players in the world in his class are, annoyingly, now his team mates. On the face of it, Manchester United replaced Ronaldo with Antonio Valencia. An excellent addition, but not quite in Ronaldo’s class. But of course that doesn’t represent the fact of the matter. United shifted their emphasis by making Rooney kingmaker of the team and surrounded him with pacey wingers to cater for his penalty box whims.

Cesc’s long term benefactors as the creative fulcrum of Arsenal are internal. The manager, correctly I think, has faith that the exciting axis of Ramsey and Wilshere can rule the roost for years to come. However, they’re not quite ready to shoulder the burden of a 60 game season. So what Arsene has done is to bring in two established, proven creative players.

Both have extensive Premiership experience, both off the shelf and ready to go. Meanwhile, Ramsey and Wilshere can continue to develop away from the glare. We won’t have Arteta or Benayoun for long, but if the theory all works out, we won’t need them for long. Arguably, this is the sort of thing Arsenal should have been doing years ago. Blending young talent in seamlessly alongside hardened pros.

I’ve liked Arteta and Benayoun for some time. I think I’d have taken either at any point over the last 5 years. However, I won’t flatter myself or deceive you, dear reader, by going into lugubrious detail on the captures of Mertesacker or Santos. I’ve not honestly seen much of either. Save to point out that at 25, with 3 England caps and 1 year left on his deal, Gary Cahill is apparently worth £17m. Whilst Mertesacker, at 26, with 77 Germany caps and a secure contract at Bremen is worth £8m. In the words of Mos Def, it’s simple mathematics.

A notable trend surrounding our dealings of the last 48 hours is in the age and experience. All 5 players acquired in the last minute trolley dash are aged between 26-31. Four of them have extensive experience of captaining club or country. It doesn’t take Herbert Chapman to figure out that therein lie the fruits of a deliberate strategy.

Another thing that strikes me is that Arteta is a right footed dead ball specialist. Santos is a left footed dead ball specialist. Mertesacker is built like a brick shit house. Lest we forget that, not only were Arsenal abysmal at defending set pieces last season, we were a steaming pile of bum gravy at attacking them too. Yet more circumstantial evidence that this rash of signings weren’t as panic stricken and ill thought out as people are suggesting.

However, to say that our transfer window was a fiendishly devised masterplan that was executed to a tee would be well, well wide of the mark. Questions need to be asked of the club and most importantly, by the club. The prevailing question would be why in shitting crikey were we bungling around looking to secure players at the death throes of the window, having already surrendered good points in the league.

To an extent, I have some sympathy here. Had we bid for Arteta back in July, Everton would have “accidentally” made that interest public, as they did with Jagielka. In short, as Valencia did with Juan Mata, they’d have had the opportunity to create something of a bidding war.

Had any other members of the top 4 cartel been interested, we’d have been blown out of the water – just as Arsenal had to surrender their interest in Mata as soon as Chelski started brandishing their blood money. It’s interesting that almost none of the players acquired at the end of the window were linked with us in anyway until a few hours before they were signed, sealed and delivered. However, I could understand that approach with perhaps 1 last ditch signing. 2 at the most. But to leave 5 gaping holes in our squad with five crucial games on the fixture list was negligent.

I appreciate our hands were tied with the Fabregas saga, bound as they were in cunty Catalunyan manacles. But the dithering over Nasri baffles me, quite frankly. City’s interest and Nasri’s resolution to leave were known very early in the window. The club’s shifting, indecisive stance proved costly and unsettling against the backdrop of the captain’s departure. The sense of discord in the squad has been increasingly obvious with each game and I think the management dropped the ball there.

However, we must also look upon out outgoings as a prompt to review some of our practises. With three hours of the transfer window remaining, Arsenal walked away from the negotiating table with Mikel Arteta because they baulked at paying him slightly more than the wage packets currently enjoyed by Abou Diaby and Manuel Almunia. Arteta has subsequently taken a pay cut to come to Arsenal from Everton. That my friends, is the lure of qualifying for the Champions League.

I get the principle of a uniform wage structure that sees all players earn similar amounts. But the reality is, if we’re to compete for the big players, this may have to change. For evidence, consider this. We have only been able to shift Bendtner and Denilson on loan deals when there must have been willing buyers. Manuel Almunia and Sebastien Squillaci are still living in the woods, with their feral lifestyles funded by an Arsenal payslip a month. Other clubs haven’t been willing to pay these players the wage we pay them. Whichever way you slice it, it’s a policy that has caused us trouble this summer.

All in all, it is absolutely impossible to judge anyone’s transfer business until the new acquisitions have played a bit. You could sign Lionel Messi, but he might hate London, he might not fit in or he might take umbrage at Frimpong’s impromptu toga parties at hotels before away games. But I’m satisfied that, eventually, an attempt has been made to plug some of the more glaring gaps in the squad with some quality additions. I’d have perhaps liked another defensive midfielder, but then again I wouldn’t mind a night in with Milas Kunis. Life ain’t fair.

Whether or not it all knits together is now down to the coaching staff. But for now, I’ll leave you with my favourite comment of the night from @binhaf on twitter:  “Arsenal confirming what every woman already knew: when you’re down and sad, going shopping helps to lift up the mood.” Till next week Arse chums. LD.

Previous articleArsenal take it to the wire with Arteta and Benayoun
Next articleInhale, exhale, sloooowly + Arsecast 207