Welcome to a fairly gloomy Monday morning. Not just from a weather point of view either. Ideally we’d be sitting here now looking forwards, not backwards, and twirling, always twirling, after a good win at the weekend. The reality is somewhat different.

The team hit its easy to find self-destruct button again against Blackburn and the frequency with which we do that seems to be increasing, which is a real worry. Perhaps you could trace it back to that calamitous 4-4 draw with Sp*rs a few seasons ago, when we threw about a two goal lead with just a couple of minutes of injury time to go. Since then we have, in all competitions, conceded 4 goals a further six times, conceded 3 on countless occasions and that eight at Old Trafford will live long in the memory.

We are a team that concedes too many goals. Look at the way our goals against tally has gone in the last few years.

So far this season we have conceded 14 goals in 5 games. Perhaps the Manchester glut skews things slightly, but come the end of the season when the numbers are crunched, it won’t matter too much when or how they went in, just that they went in. And they continue to go in despite personnel changes. Arsenal’s back five against Sp*rs for that 4-4:

The back 5 on Saturday:

Only one player from that day remains, Bacary Sagna, who, at least, is reliable and consistent. All the rest have changed yet the defensive flaws remain the same. We are liable to the quick ball over the top, our offside trap is ineffective (witness both Santos and Koscielny playing Yakubu onside), there appears to be a lack of communication and despite the manager saying we had improved from set-pieces that’s clearly not the case.

Yet there’s something more to it, I think. Something less tangible. We’re almost schizophrenic in the way we can turn from a team playing good, confident football to one that looks bereft of any self-belief in an instant. If we were a boxer you might say we have a glass jaw. One good punch and we’re reeling. You could almost see the team go into its shell after Song’s own goal, knowing that any further blows could be knock-outs.

Do we have a club pyschologist? If so, he’s rubbish. I suspect, had we equalised late on Saturday, we might have heard something about the mental strength we showed to fight our way back. And sure, there’d be something to that, but wouldn’t it be better to show the mental strength not to go 4-2 down in the first place? Winning games, performing well, producing consistent results, all these things are a product of mental strength too. Clawing your way back into a game isn’t the only way to demonstrate it.

The real worry for me is that when a team is struggling for form and confidence, the way we are right now, you eschew any grand designs you might have, and go back to basics. Keep it simple, do the easy things, do them well and often and they become the building blocks for recovery. So when you read the manager talk about that you can’t help but be concerned. He said:

We made mistakes and, at this level, you cannot make the mistakes that we made. We made basic errors.

I highlighted the talk about lack of focus yesterday and that too is an issue, but when you can’t even have any confidence in your safety net, the ability to do the basics properly, then you know things are going to continue to be very difficult.

There’s talk that the players themselves are behind the manager still but want improved defensive coaching. However, it seems to me that this kind of appointment would require the manager to seriously compromise his beliefs. His training sessions are sacrosanct. We know how he controls everything, to the minute, his drills etc are his own, and while there’s no doubt he’s put together a great defence before (The Invincibles), he seems unable to do it now. 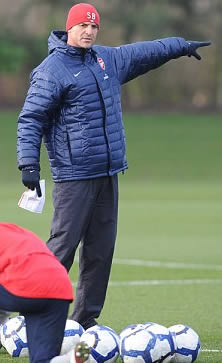 People talk about Martin Keown, which is a fair shout, but he seems to be more focused on a career in the media at the moment. Which is entirely his right. I have no idea if he’d want to get into the nitty-gritty of coaching day in, day out. He did some work with the back four during our Champions League run but he was never our defensive coach and never had that much control over the work he did.

What strikes me as so obvious is that Steve Bould has been at the club for years now, working his way up, learning as a coach, and is now stuck in something approaching limbo. He’s a ‘Youth-team coach’ and while I’m sure he enjoys that work he must feel he’s paid his dues at this stage. He’s done it the hard way, no managerial position straight after retirement, no failing because he had no experience, he’s put the hours in on the training ground.

And he seems to get slightly overlooked when people talk about the famous George Graham defence. Here’s a man who went through drill after drill after drill, George pitting his back four on the training ground against 6 attackers, then 8 attackers, honing the offside trap, teaching them, making sure that what they did was second nature.

To me it seems obvious that if Arsene Wenger wants help with coaching his defence he’s got the perfect man right under his nose. Bould has been brought up as a coach with the new Arsenal, focusing on the technical side of the game, ensuring players are comfortable with the ball in order to keep possession as much as possible. But he was forged in the old Arsenal, where organisation, communication, and hard work on the training ground translated into performances on the pitch.

Perhaps it’s a case we’re hankering for halcyon days but these are difficult times. We would be entirely wrong, frustrated as we are, to lose sight of all that Wenger has done for the club and the style of football he’s provided. However, it would be no shame to admit needing help, the numbers don’t lie, we’re conceding more goals and looking less solid. Confidence, or lack of it, plays a part, no question, but it’s not simply a question of that.

Something has to change and at the moment it seems unlikely to me that it will be the manager. I just don’t see this board making that decision, unless things continue as poorly as they have been for some time to come. And here’s where we come to the vicious circle. If the manager isn’t going to be changed then the only thing that can change is his staff. I said if Arsene wanted help with defensive coaching he’s got the perfect man at the club already, but does he want help?

Does he still believe that he and Pat Rice and Boro Primorac can turn things around? If so, there’ll be no call for Stevie Bould to make the jump up to, perhaps, add something fresh (if vintage in origin) to the training. And I’m worried that without that our defensive woes will continue. And if they do I fear we’re going to have a long, frustrating season on our hands.

When things aren’t working you have to try something new. Doing the same things over and over again, seeing the same problems repeat themselves, is madness. Whatever about Arsene not listening to the fans or the media (in all its forms) when they speak about our defensive woes, if the story above is accurate, he’d be mad not to listen to his players.