Well that was something, eh?

I can’t quite remember a transfer deadline day like it from an Arsenal point of view. I remember when we signed Gallas, Denilson and Baptista back in 2006. Actually, that’s a lie. I remember waking up the next morning to discover we’d signed them, but my sense is there was nowhere near the intensity that we saw yesterday.

And it went right till the chimes of Big Jim, the transfer deadline clock, rang out. All in all, I think it was a pretty successful day and the last few days have done plenty to counter the negativity that rightly surrounded us since the Old Trafford debacle. Whether or not we’d have been as active if that result hadn’t happened I just can’t say. And frankly it doesn’t matter one bit. The important thing is that we needed players, with fairly obvious skillsets, and we got them. 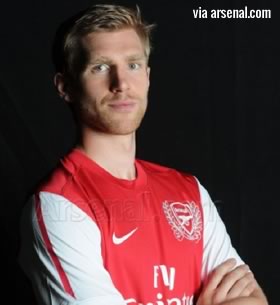 The club first confirmed the deals we already knew about. Park was confirmed earlier in the week, then we got André Santos and Per Mertesacker. But we knew about them already. Where was the fresh meat? The exciting new player we hadn’t been linked with? The one that would make people go ‘Ooooh’? The one that would add creativity to our midfield.

There were plenty of names bandied about during the day. Some of them I’d heard of, some of them not so much, a couple not at all, and one of the things that makes transfer deadline day so entertaining, in its own way, is the fact people are completely and utterly willing to forego common sense and intelligence at all times.

Some bloke texting a rumour to the BBC, which is clearly made up, has people in a frenzy hoping it’s true. Both Sky and the BBC were guilty yesterday of falling for a fake Twitter account which said that Arsenal had agreed terms with Eden Hazard. I mean, if the press themselves can’t be arsed with basics like fact checking why should those hungry for the rumour stew bother?

Anyway, the day went on, some players went out (details to follow) and then there was talk of Mikel Arteta. It was very much on. Within an hour it was very much off and Arsenal had turned their attentions to Yossi Benayoun. I’ll admit, I found myself quite underwhelmed at the idea of Benayoun, on loan from Chelsea, being the man to add creativity to our midfield all on his ownsome.

I think it would be fair to say those of us caught up in the day fell into something close to despair. How could this be it? How could we seriously go out shopping with £50m+ at our disposal and the best we could do is Benayoun on loan from Chelsea? That’s almost like getting two Adam Sandler box-sets. But then, wait, Arteta was back on. Properly on. Apparently he told Everton he wanted to leave, and all this happened inside the final 90 minutes.

Now, here’s the thing, later we were told Arteta had been at the Arsenal training ground at around 6pm yesterday evening. So I reckon it was all done and dusted much earlier than they let on so they decided to take the piss a bit. Send the documents, have a cuppa, don’t tell Sky till 10.59. Maybe it was different, maybe it was all wrapped up in the final hour, but I doubt it. All the same, inside that final hour we confimed Benayoun on loan for a season and the signing of Arteta on a four year deal.

I really rate Arteta, I have to say, and I’m very happy with his signing. Clearly you can’t directly replace a player like Cesc, but Arteta ticks many of the boxes. He’s experienced, good quality, good character, no adaptation to the English game, and for him he’s got a chance to make a step-up to Champions League football quite late in his career. I think he’ll prove to be a very astute signing and he’s the one that ties it all together for me.

Benayoun, injury worries aside, will certainly add some depth to the squad. The Mugsmasher has always said he was a much better player than given credit for, so today I’m going to listen to him for once. On his own his signing would have been more difficult to justify, but alongside the Arteta deal it looks ok to me.

There will be some who will say we’ve gone panic shopping, and while I can see where they’re coming from, on paper it’s very difficult to argue with what we’ve done. We needed an experienced centre-half to add some physical presence to our side. We’ve bought a vastly experienced German international, the captain of Werder Bremen. We needed a left-back, we’ve got one. We needed at least one midfielder, we’ve bought two, both of whom have experience of the Premier League. We needed a striker, Park is a striker and while clearly an unknown quantity to many is the right age and captains his national side.

And there’s the other thing. Nearly all of them have captained their club or national sides. We wanted quality, we got some quality, we wanted experience, we got some experience, and we wanted leaders, we got some leaders. It was fantastic to watch the excitement of Jack Wilshere on Twitter last night as the signings got closer and closer. There’s no doubt that these players add balance to our squad. They’ve got the age and experience not just to take responsiblity on the pitch but to allow the less exerpienced players to learn from them

Perhaps, if you were nit-picking, you’d say we didn’t make the marquee signing, the one which would really signal our ambition, but it was always more important to add a number of good players than one star. For me these are good players and the squad is now considerably stronger than it was. Why we didn’t do it in a more timely fashion, so we could prepare better for the season ahead, remains an obvious question but it really is a case of better late than never. The questions about why can wait and I would hope that behind the scenes lessons will have been learned so that when January comes, and when next summer comes, we’re not found as badly wanting as we were this time around.

Anyway, while we welcome the new boys it’s goodbye to some. Nicklas Bendnter has joined Sunderland on a one year loan deal, which is really the only disappointing departure for me. Not so much because of the quality of Bendtner but concerns about Chamakh. Let’s hope our South Korean friend can go some way to fill the gap and perhaps rouse the Moroccan from his footballing slumber.

Henri Lansbury will see out the final year of his contract on loan at West Ham, Gilles Sunu joined Lorient on a permanent deal while Joel Campbell joins him on loan due to his work permit issues. So the final summer tally looks like this:

By any standards that’s a considerable amount of business. It’s no surprise that we’ve managed to come out of the transfer window still tens of millions to the good but, maybe with better planning and better organisation, we could use a chunk of that in January to give ourselves another little boost.

Overall, after what has been a long, long summer, during which so much has been written and debated about the team, the squad, the manager and the board, I’m delighted that we can now just get on with the football. It’s been a pleasure sharing it all with you, and so many of you, but we now know our squad, and it’s time to get settled, get everyone together, find our most effective team and bench, and start winning some football matches.

I think our bad start is going to require some serious hard work to put behind us but I think the business we’ve done will have given everyone a lift, from the players to the fans. It’s important now that we remember we’re all hoping for the same things, that we are the Arsenal. Perhaps a very different Arsenal from the one we were 3 or 4 months ago but maybe that’s no bad thing either.

It’s also funny that due to the vagaries of our schedule the transfer window is closing as we go headlong into an Interlull. However, I don’t think the few days to calm down and take stock of where we are will do anyone any harm.

It’s been some ride. I’m happy to get off now. And I definitely need a drink.