Greetings from the billowing rubble that is now my home city. The new season is but an inswinging corner kick away. The bowels are clenching, the skin on my knuckles tightening and the teeth grinding as the anticipation of that first Newcastle set piece begins to dawn. For the last three months, I have been something approaching a pleasant, available and accessible individual for my friends and family.

But now the fingernails are getting longer and thicker, the hair on my ears denser. My nerves are excited and the sight of the moon leaves me with an inexplicable desire to howl like a banshee. Relaxed, socially acceptable Tim is about to go back into hibernation for 9 months. His replacement is a pod person that will skip your funeral for Wigan away. He will spend large segments of conversation ignoring what you’re saying, staring into middle distance ruminating on what happened to van Persie’s free kicks.

The new season is here and I simply cannot fricking wait. “But Tim, Tim, how can you be excited? It’s all to shit. It’s the end of the world as we know it, so how can you feel fine?” To the naval gazing naysayers my riposte would be: ‘if you’re not excited about the prospect of a brand, spanking new season, wrapped as it is in pristine cellophane, then it’s time to consider why you persist with the sport’.

Yes, yes I get it. People are unhappy that we haven’t signed an atomic super mutant of a centre half as yet. People are aghast that we’re wanking our bank account dry on 12 year old wide forwards. Yes David Dein should come back and cast a hex on the billionaires in West London and Manchester whilst simultaneously purging the world of all sin. But living life in anticipation of a worst case scenario that may arrive at some undetermined point is a miserable way to treat an exciting pastime.

I’m looking forward to strapping myself in and enjoying the ride, whatever it brings. That’s the fun isn’t it? Finding out how things do work out? With regards to the 2011-12 season, we are at the cusp of sweet, unknowing ignorance. Tis blissful and exciting if embraced in the correct way. Frankly, I don’t spend the final moments before getting on the rollercoaster dreading the inevitability of it careering out of control and tossing me to my death. We may well go to hell in a hand cart. We might get relegated and liquidated in one fell tidal wave of grimness. But you know what? I spend about 25% of my annual salary watching football, so I think it makes sense to enjoy it. 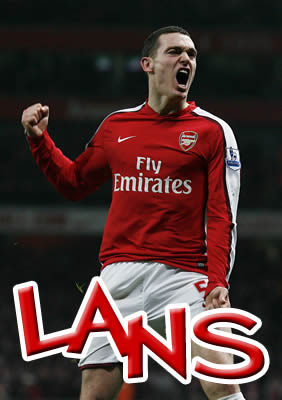 Besides which, things are looking up on the additions front. Arsenal were this week able to unveil another “like a new signing” as Ryo Miyachi’s work permit was approved. With Vermaelen, Traore, Vela and Fabianski, that brings our LANS accrual up to five this summer. See, we have been busy! Can’t you see that extra bulkiness flexing from the bicep of the Arsenal squad? The last time Arsene tossed the old “like a new signing” chestnut from the grill, I accused him of lacking self awareness. But now it’s clear he’s doing it intentionally. I imagine the playing staff are all joining us in a game of Arsene Bingo. Who else shouted “House!” when he added Ryo to the LANS roster?

And if that wasn’t enough to make your gusset damp with expectation, Arsenal even went and added a bona fide, genu-wine, no givesys backsys new signing. One that we paid money for and everything! Just think, when Alex Oxlade-Chamberlain recovers from the inevitable six month injury lay off; he can be a LANS too! In all seriousness, I’ve not seen an awful lot of him, but I gather he has good technical ability and he looks to be quite the physical specimen.

I realise a 17 year old playmaker isn’t our priority, but it strikes me that we left this deal when it hit a snag earlier in the summer, but followed up again due to rival clubs sniffing around. Had we lost him to United or Liverpool, no doubt the minority complaining over his signing would be pissing their knickers if we had missed out on him. Anyway, I join the majority of Gooners in welcoming a big talent to the club. I’m still very confident a defender at least will join him.

Despite the protestations of some more reactionary supporters, I’m pretty certain it’s possible to have more than one deal “in tray” at any one time. Or possibly people were expecting the club to wrap up the signing of Chamberlain, only to snatch the pen from his grasp upon the contract signing? “Ooh, sorry Alex. D’yer mind sitting tight for a bit until we sign a centre back? No offence, but it’ll be bad PR to unveil your whiskery chops until we can reveal the signing of Jimmy McSledgehammer at centre half. Ta.”

Of course last weekend saw the team conclude their pre season with a 2-1 defeat at Benfica. The first half showed some very promising signs, with the link up play between van Persie and Gervinho particularly intriguing. A half time lead of 1-0 looked to be scant reward for a good half. However, the second period was a different story altogether, with defensive mishaps from Gibbs, Vermaelen and Squillaci in turn seeing us succumb to a 2-1 reverse.

The team that began the game looked to be the guts of the side that will start the game at St. James’ Park on Saturday. I think I’d have liked to have seen that XI get a good 70 minutes together. As it was, we made a raft of substitutions at half time which appeared to disjoint our rhythm. A large slab of the second half saw us field a back five of Fabianski, Jenkinson, Miquel, Squillaci and Traore. That surely can’t be a priority seven days before the season starts? I realise that Gibbs and Vermaelen went off injured, but there were changes in other areas of the team very early on too and I question how much Arsenal actually gained from the second 45 minutes.

The draw for the Champions League Qualifying Round has of course been made since last we spoke too. Udinese was not quite the doomsday scenario of Kazan, but it hardly represented the kindest draw we could have had. Especially as the second leg will be away from home, on the Wednesday before we travel to Old Trafford. I realise Udinese lost some key players this summer, but with Nasri and van Persie suspended and Fabregas unlikely to play, we’re hardly going to be in prime condition ourselves. Nevertheless, my flights and tickets are booked in the hopes that Arsenal’s good record in Italy continues.

Before I leave you, I’d draw your attention to the fact that the Arsenal Ladies play a crucial Superleague encounter with Doncaster Belles at Borehamwood on Sunday, whilst the Arsenal Reserves kick off their campaign with a home game against Manchester United at Underhill on Monday evening. Do try and get along and lend the teams your voices if you can. But I’m sure the recent additions to the arseblog news roster- Jeorge Bird and LadyArse- will be able to keep you posted on developments there. Until then, I hope to see some of you at Newcastle on Saturday. Up the Arse. LD.

Previous articleWork permits, cones, Chamakh and Rambo
Next articleWhere we are and where we could be