Morning all, welcome to the penultimate Friday of the off-season. This time next week we’ll be all like ‘Hurrah! Football’s back tomorrow. Where are my lucky pants which aren’t that lucky at all now that I come to think of it?!’

Despite it all – and ‘it all’ being the all day, drip-drip torture of not signing anyone and the having the same arguments over and over again so many times that Paddy actually sat down – I’m looking forward to it. At least there’ll be something new to complain about if it all goes wrong exactly the same way as it always has. Oh.

I’m doing my bit to force Arsenal into the transfer market by refusing to shave until we make a signing. I really hope we sign someone soon, not just because we need some new players, but because it’s all getting a bit itchy now. Still, these are the sacrifices we make for the team we love, right? And if we sign someone really cool and awesome, I’ll shave it into a fulsome handlebar moustache.

Wasn’t it the captain of Brighton years ago who refused to shave as long as they were on their FA Cup fun? He sported a massive grizzly by the time they got the final which they drew 2-2 (Staplecunt scoring for United, I remember) then they lost in the replay and his beard did him no good in the grand scheme of things. In which case, my point is that the beard will have absolutely no effect on our transfer business and I’m undergoing the itching for no good reason at all. I might shave this morning. 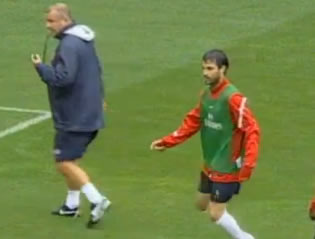 everyone from getting their collective knickers in a twist about a photograph. Would Cesc be in it? Would he not? Would he be smiling or scowling? Would he lift up his shirt when the photographer said ‘Say Cheese!’ to display an Amnesty International logo, showing the world he was a prisoner of conscience in the ruthless, despotic Arsenal regime?

Most likely he’d have sat there, with his teammates, and had his picture taken. And then where would we be? What inferences could we draw from it other than, you know, he had his picture taken. I watched a bit of it on the Arsenal Player and he took full part in the training, running up and down, stretching, playing some football. Sometimes his facial expression was serious, other times it was not serious. Many of the papers this morning use photographic evidence of him ‘not smiling!’ as proof positive that, well, he’s not smiling.

Like most of the players he was very open and relaxed with the members, signing autographs for kids and the whole shebang, so really, yesterday didn’t tell us too much. Samir Nasri was there but didn’t train. OMG. So was Eboue and neither did he. OMFG. Manuel Almunia wasn’t there at all! TFG. And Nicklas Bendtner was there and spent the morning spanking in goals from all over the place. TGSTEL!

Also in da house was Ownery Joe, or Stan Kroenke as he’s better known. Did he, as Gunnerblog suggested, only come to see Eboue? If so he’ll have been disappointed. His presence suggests boardroom activity but whether that’s related to our transfer market activity or if they’re simply discussing the installation of merchandise vending machines in the toilets remains to be seen.

One would hope that we might hear something from our new owner. Or if not, some demonstration of his plans for the club that speak more than words. Come on Stan, how easy it would be to show me how you feel? The issue of players coming in still hinges on players going out, of course. The squad limit of 25 means we’ve got to find room somewhere, the the main problem being that money is in short supply throughout the game and the transfer market is very quiet this summer.

Players we want to move on are finding it difficult to attract suitors, obviously Bendtner has been given permission to speak to other clubs but his presence at training yesterday is quite telling. Maybe Eboue might go, I think we’ve genuinely put Almunia into the Witness Protection Program, and there’s still the futures of the big two to sort out. I’ve said all that needs to be said about Cesc for now, but Nasri still causes problems.

From a financial point of view it’s very difficult for a club like Arsenal to turn down £20m+ for a player in the final year of his contract, even if keeping makes some sense from a sporting perspective. This morning’s L’Equipe (French link) is running a story which suggests Arsene has ‘opened to the door’ to a move to Man City with Nasri having already agreed terms with Mancini’s Mercs. Que sera, sera, I guess.

Let’s hope the presence of Stan adds some decisiveness to our summer and that we can do the business we need to do before the season kicks off. An active week would go some way to making everything feel better and, most importantly, putting us in a stronger position as the new campaign starts.

In other news, the draw for the Champions League qualifier takes place this morning. The potential opponents are: Odense, Udinese, Twente, Rubin Kazan, or FC Zurich. I’m keeping fingers crossed we avoid the long journey to Russia as they’re probably the most tricky team of the lot. The draw takes place at 11am this morning, so follow on Twitter if you want instant updates.

And finally for today, less than 24 hours after signing a new deal Kyle Bartley has gone to Rangers on loan for the season. I’m sure those who reacted to his new contract by declaring our transfer business done because he was going to be the centre-half we needed (cheap option, you see) will be delighted this morning. Wrong, but delighted. The best of both worlds.

And that’s about that. The team head for Portugal today ahead of our final pre-season game against Benfica tomorrow night. There will most likely be some live blog action for that one as we test out some new stuff, but more on that tomorrow.

For now, have a good Friday.