In the age of the microwave culture, with the spectre of media hyperbole dangling grimly in front of us like King Kong’s nutsack, every week is an enormous week for a club like Arsenal. Every result has permanent ramifications; every fluctuation of fortune is intransient and every whisper of discontent has the tabloids reaching into their clipart files for the broken cannon graphic. But even in respect of vituperative and omnipresent crisis coverage, the last seven days have been something of a whirlwind for Arsenal.

The most striking incident of the week has obviously been the conclusion of one of the more torturous transfer pursuits of the modern age with our captain finally sealing his move to Barcelona. I have covered my impressions of the transfer elsewhere,  so I shan’t retread old ground, save to say that Cesc should leave with our best wishes and be remembered as a true great of this club. 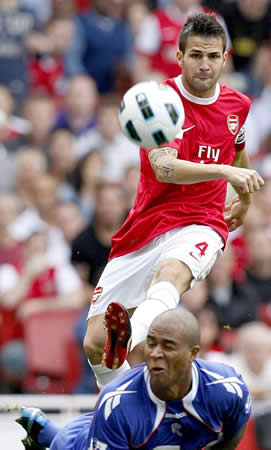 However, the Chinese water torture approach to the transfer from Barcelona leaves me feeling embittered towards them, to the extent that I am actually willing that obnoxious cunt Mourinho to take them down a peg or two. That, my friends, is akin to urging a pack of rabies infested hounds to go easy on Piers Morgan’s testicles. An unthinkable prospect I’m sure you’ll concur.

I know there are many arguments to suggest that Arsenal should have concluded this saga much more quickly; but that misunderstands that we weren’t really in the driving seat here. If Barcelona had made an acceptable offer back in May, the club would’ve done business. That Barca didn’t adds further documentation to the portfolio marked ‘Barcelona cuntishness.’

The manager angered some with his press conference a few hours before the wheels really moving on the Fabregas transfer, when he pithily announced, “I expect nobody to leave.” I’d have to stick up for the manager here, even if the phrasing was unfortunate. I think he’s been semantically misinterpreted. Looking at how he emphasised the word “expect” I deduced that he meant he expects nobody to leave in the same way I would expect no human being to murder another. I think it was a nuance of language that didn’t translate into print.

Anyway, Robin van Persie is the new captain now and I think that’s a sound choice. He’s grown up with the club, from being a bit of a “problem child” into one of the most respected and senior figures in the squad. Vermaelen will effectively deputy him. There were a lot of calls for Vermaelen to have been made captain, but I don’t think we need to obsess over minutiae. Since he operates in a different area of the pitch, Vermaelen will be expected to lead the back line. Whether or not he has a piece of cloth strapped to his arm won’t alter that role one tiny bit.

Any eulogies for Cesc really have to put on hold, because we’ve lost an enormous player from our squad and the funds simply must be used to replenish our roster. There is no two ways about that. The Nasri situation is still rumbling on and I do think the club have mismanaged that situation badly. Their apparent indecision, shifts in emphasis, the hard line followed by the grapevine in terms of openness to sale. It has all contributed to a situation where he is still at the club, but not being utilised as a player due to being unsettled. Now we have the unseemly situation of him being at war with the club’s supporters whom, I can personally testify, volubly sung a rather unpleasant song about him at St. James’ Park.

He is effectively dead weight in our squad that needs shipping and replacing. The problem is, one assumes we knew that in June but didn’t act. Whichever way you slice it, the situation is a farce. If you’d asked any Arsenal supporter at the end of May whether they’d have taken the current situation with a fortnight left in the transfer window, I don’t think you’d have had a lot of takers. We’re in a situation where we are perilously close to requiring the panic button in our transfer dealings.

Prospective sellers know this, the club’s fans know this and it will likely lead to us being asked for some inflated prices in the market place. Within reason, we are going to have to say so be it. We cannot go into the season with the squad as threadbare as it is. That we’ve gone into a tie like Udinese without the faintest idea what our playing squad will look like come September 1st is hardly ideal. To progress much further in this shape would be negligent. The club have backed themselves into a corner now.

It’s the sort of situation that led to around 50-60% of the 3,000 travelling fans around me on Saturday imploring the manager to “spend some fucking money.” I didn’t agree with the chants at the time. I thought the team battled hard at St. James’ Park. The chant went up with about eight minutes to go, when we were down to ten men, away from home and grinding out a point. It wasn’t the opportune moment. Particularly when most of those chanting would probably venture that we should spend most of our wedge on defenders, at a time when Koscielny and Vermaelen (along with Szczesny) were enjoying quite superb games.

If anything, I think those chants would probably have had more credence during the Udinese game. Once again, the defence aside, it was a rather impoverished performance that lacked cohesion. But the chants did not air during that match, for no other reason than we were winning. Supporters’ indignation is a fickle tune to dance to. People’s impressions of performance are always dictated by scoreline.

Any attempt to dress the ditty up as some kind of hard-line statement rather falls down in view of the fact for me. If your principles on the matter are that flighty. Maybe that’s just me though. But this is the level of fatalism that is embroidered onto the psyche of the Arsenal populous now. It says, “Unless you are winning, we are going to give you a right tongue lashing.” Nevertheless, it was nice to get back out on the road for an away game again.

In between the fits of pique and the tweets of Pique, there has actually been some football played. There have been positives to glean from the first two games. The partnership of Vermaelen and Koscielny has looked a very symbiotic one. Koscielny in particular doesn’t get the credit he deserves. If he were currently plying his trade for Bolton or Blackburn, Arsenal fans would be feting him as the cure to our defensive ills. He is also unlikely to garner any vestige of credit from the wider media because it doesn’t quite chime with their “Arsenal need Giant Haystacks at centre half” line.

Wojciech Szczesny too seems to have grown an extra foot in stature over the summer. He has been a commanding presence in goal, leaving his line with impunity to relieve the pressure from his defence. It has been notable that he has edged off of his line very early as opponents have shaped to take set pieces. This allows him to make swift decisions as to whether to come and collect or not. He’s given us an assurance in the nets that Almunia and Fabianski have been unable to provide.

However, the creative gumption has been missing badly in both games. We simply have to refurnish our options in the transfer market to amend that shortfall. I have been quietly impressed with Gervinho and his directness. The final ball has been somewhat lacking, but I think that will come as the chemistry with his new team mates froths and bubbles. What a shame that fucknugget Barton has enervated Gervinho’s progress there.

That will have to about do it from me this week. Let’s hope that when I speak to you again next week, we’ll be some way closer to being familiar with our squadron for the campaign ahead. Next week’s blog is likely to be a touch later in the week, as I don’t arrive back from Udine until Thursday evening. I hope to see some of you out there. Up the Arse. LD.