Organs of your club

I believe it was Martha Reeves that once warbled, “Summer’s here and the time is right, for sitting on your hole and waiting for the fixture list to be published.” Whilst on the surface, the hills aren’t exactly alive with the sound of music on the Arsenal front, there froths a bubbling undercurrent. This is most obviously manifested with the Samir Nasri contract situation.

I’m in comprehensive agreement with Blogs’ musings on the subject. Maybe it’s because I’ve emotionally adapted to the rigours of the modern game, or maybe it’s because I’m a naturally hardened, cynical bastard, but I fail to get excited about this sort of furore. If I were to complete a list of my least favourite things in the world, football agents and newspapers would feature prominently, (possibly just below ticket touts and anything that doesn’t make John Terry eternally miserable).

And newspapers and football agents are the exact conductors of this sort of wailing symphony. As such, I just struggle to give a monkey’s ball bag about any of it, even if I think I probably should. I’ve learned not to get attached to footballers as personalities and I think many could do with demisting that line between appreciating a good footballer and superimposing that admiration onto them as personalities. This would also explain my unrelenting confusion as to why so many people remain so utterly fascinated with who footballers have been putting their winkles into. Life becomes more pleasant when you simply view them as organs (heh) of your club. 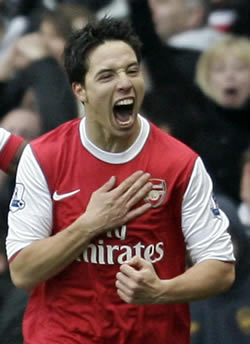 I find it hard to believe Nasri hasn’t been offered contract extensions before now and that he hasn’t been advised to string this out for his own ends. The public flirting with Manchester United also likely represents a Machiavellian ploy to waft the wind of doubt into the negotiation room. I can understand the moral indignation from Arsenal supporters over this; but we have to confront some truths about ourselves too.

Patrick Vieira adopted the exact same tactic in the summer of 2001 when he lifted his skirt towards Salford (it’s even rumoured his agent Marc Roger met with United officials that summer). In fact, half way through the 2001-02 season, when the manager gave the players three days off following an away draw with Leeds, Vieira boarded a flight to Madrid.

But the fact is, that May Vieira was holding something shiny above his head and our moral compasses were tossed away with the wind. They were tossed so hard and so far that we would have needed a compass to find them again. Or something.

That’s what it all comes down to. Trophies. About 90% of the average football supporter’s supposed liberal conscience disappears if so much as a Carling Cup is hoisted in their direction. A bit like when the light catches my watch face and I can make my cat chase the reflection around the room for hours, a football fan’s brain goes all suggestible and fuzzy once any sort of cup is secured. A lot of the disquiet around the football club would not be there now had we so much as secured that one pot.

To use a completely hypothetical example, if our captain were to get totally sozzled on lager, get into a car and crash it through an old lady’s wall, resulting in spending some time in chokey, we wouldn’t tut tut so long as he was holding a trophy aloft come May. So perhaps we shouldn’t pretend to be such bastions of ethics ourselves.

There have been some international games played over the last week and whilst I continue to find international football about as exciting as a particularly troublesome Sunday morning beeriod, it was interesting to see Capello point to fatigue as a factor for a listless England performance. I say it’s interesting in the respect that, of the eleven players he selected, only Ashley Cole had played more games than Jack Wilshere this season (Cole has 54 appearances to Jack’s 53) and yet he didn’t seem to have any compunction about sending Jack to the U-21 Makita Cup or whatever the hell it is. Thank goodness common sense (eventually) prevailed there. But the remark elucidated the fact that the national side did not have Jack’s best interest in mind at any point.

Save for that, there’s not an awful lot being played in the public domain at the club just now. The much vaunted Arsenal Player is also supposed to be launched for members’ today – though I’ve yet to see any further commercial literature surrounding that. The Arsenal Supporters’ Trust conduct their annual review meeting with Ivan Gazidis this coming Monday night and I’m sure that promises to be a rumbustuous one as the Chief Exec faces the heat for a season of underachievement.

But the word on the street is that we’re experiencing the calm before the storm when it comes to player movement. There are several issues to be resolved with regards to the personnel we already have; the futures of Cesc and Nasri will likely have ramifications on others for instance. If we lose one or both; then a knock on effect will probably be felt for Rosicky’s future. We’d be unlikely to let him go should one of our other passing midfielders leave. Meanwhile, there’s an orderly queue forming for the exit door with Bendtner, Denilson and Almunia heading it. Once the broom has been swept through and the cobwebs have been cleared, we’ll likely start getting some new furniture in.

It will certainly be interesting to see the type of player Arsene recruits. There have been plenty of calls for him to revert to 4-4-2 and that’s a system he adopted on the final day of the season at Craven Cottage- which suggests he’s pondering it at the very least. With that in mind, you’d think we’d need a slightly more physical aspect to the team. But there again, Arsenal suffer a massive creative shortfall when Fabregas isn’t in the team, so we need to augment in that area too. Whether that means extra creativity coming from the wings to supply for someone like Chamakh will be a question the manager will be ruminating over as we speak.

But a change to a two striker system would raise questions upfront. In Robin van Persie, I reiterate my belief that we have the best central striker in the world. However, it’s notable that he’s never been able to forge a mutually effective strike partnership in his time at the club. Reyes, Henry, Adebayor, Eduardo, Bendtner. All have been tried but none have found chemistry with RvP.

Van Persie is an incredibly efficient penalty box striker. He tends only to need half a yard and half a second in the area to conjure a goal. If he is to play with a deputy next season, would that necessitate him dropping into a more withdrawn role, so we can allow him to play off a physical striker like Chamakh, or a ‘fox in the box; figure such as Eduardo was? Or would van Persie be the foil for a Bergkamp type to play tucked behind him?

All questions I am certain our array of armchair managers have mulled over in full when composing their transfer wish lists. Until next week chums, up the Arse. LD.

Previous articleA signing, a bid and some talks
Next articleNasri and Clichy ‘bids’ in, Arsenal targets identified