We have arrived at the stage of the summer where one begins to mentally tick off checkpoints for the maddening methadone of pre season. In the last seven days, two of my traditional tick boxes have been inked. The release of the season review DVD (bet this year’s sold like hot cakes. Any chance of a reduction if we only buy up to February?) and the release of next season’s fixture list.

Of course having been thoroughly ratified by Alex Ferguson, the fixtures still exist in the twilight of pre Sky Sports meddling. So stand by as Murdoch’s cronies fetch their black markers and decide that yes, Manchester United away really must be played at 8pm on a Monday night.

The first thing to say about the fixtures is that we are going to have to hit the ground running. With trips to Newcastle and Manchester United, a home engagement with Liverpool and a two legged Champions League Qualifier in the opening fortnight, this is a very good motivation – as if it were needed – to get our transfer business done as early as possible.

That includes resolving the futures of a few wantaways and a few contract rebels. (Sadly the term “contract rebel” is no longer looked upon as an oxymoron). Lest we forget too that the Champions League Qualifiers Draw is ‘open’ so we could easily be drawn away from home for the second leg. A Wednesday evening trip to Kyiv followed by a Saturday lunchtime engagement in Manchester could be very much on the cards.

The market still appears to be a-slumbering with very few deals of note having gone through. I know Arsenal fans are already starting to get tetchy (Arsenal fans really don’t need much invitation to do so nowadays) about our perceived inertia and protracted negotiations, but it’s worth remembering that those that dictate the market – such as Citeh and Chelsea – have also yet to shuffle their pawns and bishops. 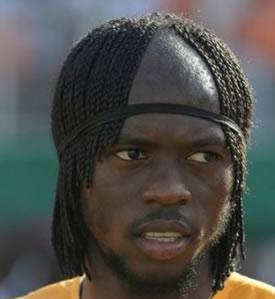 The signing of the ski slope headed Gervinho looks all but done. Again, folk appear to be incredibly uptight about how long the signing appears to be taking to wrap up, but I think fans need to shake this perception that signing a player is as simple as hitting ‘x’ on your control pad.

Image rights, insurance premiums, photo shoots, interviews etc. all need to be arranged. The insurance on Gervinho’s forehead alone will probably be a gargantuan undertaking for Lloyds of London. Protracted transfers are not a phenomenon unique to Arsenal – a glance at United’s signing of Phil Jones will illuminate that fact. Because we all live in some kind of Arsenal fish bowl, it’s easy to forget that such occurrences aren’t as parochial as we think.

But meanwhile, turning attentions to concerns very particular to Gooners; the future of Cesc Fabregas has once again tripped its way onto the tongues of the Arsenal populace. The man himself displayed characteristic class in statements he made at the end of last week; refusing to accept Barca’s invitation to strain the positive relationship he enjoys with the club he captains. Thing is; we all know what he wants, he knows what he wants. He’s never lied about it. But the fact that he refuses to flaunt it does him great credit.

I think the best description I heard came from @LadyArse last week, when she said he’s somewhat like a child that would like to go to live with his mother. But that doesn’t make him love his father any less. I don’t think it would represent any great forbearance for him to be at Arsenal next season. I realise that the likes of Rossel and his coterie have all the etiquette and charm of a Terry family Christmas lunch, but I think they’re playing a smarter game than us rightly riled Gooners give them credit for.

Barca realise that Fabregas’ contract with Arsenal is still strong. Barca also realise that they have no urgent need for Fabregas as yet with the axis of Iniesta and Xavi still going strong and providing a midfield symbiosis unmatched in world football. That they’re about to splurge the majority of their transfer budget on Alexis Sanchez proves that Fabregas is not yet their priority. Besides which, their team is already the finished article as it is. They’re also canny enough to know what everyone else knows – Cesc doesn’t want to leave for any other club.

Barca are playing the long game here. It’s smoke and mirrors at the moment. They’ll keep dropping sound bites here and there, sounding out the possibility of moving for him without showing concrete intent. That way, they can let Cesc know that that carrot of returning home in his prime is still there, which in turn will probably stop him signing another binding contract with Arsenal. In a year or two, when Xavi’s legs have aged and Fabregas’ contract ticks ominously towards its 2015 expiry, they’ll be in a strong position to do business with us. Any severance they can artificially drive between Cesc and the club in that time will make their bargaining hand all the stronger.

I think Fabregas is smart enough to know that too; hence his refusal to burn any bridges with his current employers. He’s still a young man at a club with which he shares a mutual respect. I would just implore Arsenal fans not to be so gullible as to fall for Barcelona’s dishonourable attempts to create a cordon sanitaire between captain and club. Personally I have absolutely no doubts around Cesc’s commitment when he steps on the pitch for us. His ardour when he plays for us is as great in act as it is in his words.

I have already heard some quite ridiculous suggestions that Fabregas’ performances last season were well below par and that his heart was absent from the cause. @Orbinho has posted some incredible statistics about him this summer. Fabregas completed 38 through balls in the league last season – 15 more than the player in second place on that particular chart. This in just 22 starts. An assist every 171.6 minutes made him the league’s most creative player by a street. Frankly, if you think Cesc was going through the motions last season, I would offer that you were watching him through the eyes of a spurned lover. Enjoy him while we’ve still got him. You’ll miss him one day.

The soap opera that is the Arsenal boardroom saw another twist in what is becoming an uncomfortable plot. Alisher Usmanov raised his shareholding to 29%, meaning that around 96% of the ownership of the club is in the hands of a couple of estranged and warring billionaires. I welcome Usmanov’s interest in the club like I would welcome a sphincter full of wasps. But his involvement has become the very definition of a necessary evil though whilst Kroenke has the vast majority of the club’s shareholdings tucked under his baseball hat. Whilst Kroenke continues to indulge his public aphasia, it’s incredibly difficult to place any resounding trust in him.

That will have to do from me this week. I’m off to seek competitive prices in forehead insurance. I’m really not sure I’ve had this cranial extremity properly valued. Until next week, toodles and Up the Arse. LD.