Take me to the magic of the moment

So a season that has been haemorrhaging from the guts since late February has now been put out of its misery. It’s been like watching your sickly dog leaving heaping trails of his epidermis on the carpet as he looks limply for a place to die. You know tears will be shed and that you’ll miss the little fella, but in a way you’re glad he’s out of his misery. That and you’ll no longer have to clear his tightly coiled piles off the bathroom rug. The little fucker.

With that, the trip to Craven Cottage felt more like a wake than a funeral. The lip trembling, the caw and the caterwaul had all been done. Fulham was the time for some boozing and some beery breathed renditions of some old folk classics to send 2010-11 swirling into touch. 3,000 troubadours laid siege upon London’s most picturesque football ground. For the last few years, the guys at Red Action have arranged for a supporters’ boat trip to Fulham which I am informed is, ahem, “well stocked” with sweet, song giving elixir.

Those of us that forewent the boat appeared to be likewise inclined for a liquid lunch, as the Boathouse pub on Putney Bridge was swelling with thirsty Gooners well before the clock had struck 1. With our gullets plenty soggy from aqua vitae and our jaws dripping with drink, the atmosphere in the Putney End was raucous – even if both teams played with a distinctly ‘Do we have to?’ air. Given the choice between some of the dummy spitting, bilious outpours seen at the Villa game last week and the gallows humour exhibited by the fans at the Cottage, I’ll take a large slab of satire to make a point every time.

With that, every wasted Fulham set play was met with an ironic chant of “We defended a corner!” Whilst I didn’t join in myself, I did titter at the “It’s Denilson’s leaving party, take Eboue and Diaby” song. Meanwhile, an apt chorus of, “Thomas Vermaelen, we’ve missed him all year” had just about everyone nodding their heads concurrently. However, by the end of the match, with Arsenal again toiling with all the creative impetus of a tramp’s sock, the air did begin to turn blue again with an impassioned rendition of “spend some fucking money!”

I could analyse the Fulham match in more depth. But then I could produce 500 words on why Tracey Emin is a goblin faced fucktard. It wouldn’t tell you a lot that you didn’t already know. Without Fabregas we can’t create earwax and van Persie ought to have traded his name and squad number in in March in favour of having “Go on then, give it to me, I’ll do it” printed on his back. With Drogba ageing and Torres floundering hilariously, I believe the best central striker in the world is playing for Arsenal again.

I wrote last week that I felt certain the axe would swing and we already have confirmation that Denilson and Bendtner are eyeing the exit door. Both are at an age where they need to play regularly now or else they will stagnate and you can’t see either getting that chance at Arsenal. Bendtner will probably be the more sorely missed. His goals to games record is impressive for a guy his age and whenever he’s had a run in the team, he’s shown great promise.

Unfortunately, I think many are taken in by the media caricature of Nicky as a supreme egoist. But if you actually read his quotes (and not the accompanying headlines), most of what he says is aspirational. But of course, the press turn “My aim is to be the best striker in the world” into “I am the best striker in the world” and people roll over and have their bellies tickled like Pavlov’s Dogs. The media throw the bait and the masses chow down on it like good little puppies. But isn’t that Michael Owen such a spiffing chap? Here boy, have another Scooby Snack.

Denilson’s comments appeared to attract a volley of invective from Arsenal fans, which I fail to understand really. None of the comments he made were outlandishly controversial. It strikes me we’ve all been expressing our frustration that Arsenal play nice football and don’t win trophies for a number of years, yet when a player says it we all go doolally tap.

He didn’t even say that he felt he should be in the team either, just that he wasn’t and he wanted to go somewhere where he could play. It strikes me that Arsenal fans have been screaming at him to fuck off for the last three years, so why the vitriol? Football fans are a precious lot aren’t they? I dunno, maybe it’s me that’s the weirdo here. 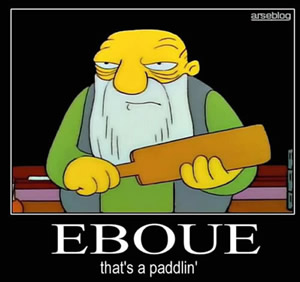 Bendtner and Denilson have confirmed their exits, Tomas Rosicky is still living in the woods with the jackals and Manuel Almunia was last seen staring down the business end of a Jens Lehmann suplex. You have to feel Carlos Vela will be jettisoned and that’s not even to mention the contract situations of Messrs Clichy and Nasri. One way or another, the winds of change are going to blow through N5 this summer.

I was minded on another site of the Simpsons episode where Homer becomes the coach of Bart’s football team. “Denilson, you’re cut, Almunia- cut, Bendtner- cut. Eboue – I like your hustle, that’s why it was so hard to cut you” and so on.

I guess now the silly season starts and the English language does not have sufficient vocabulary for me to properly articulate my apathy towards the whole sorry circus. I simply cannot get excited by any of the shadow boxing or the endless reels of rubbish.

I guess it’s indicative of how television has changed the game, that names and numbers on a screen have become more important than the ball and the grass for some. Which is cool. But for me, the game predominantly exists in the match day experience – if the tang of horseshit and fried onions isn’t in my nostrils or the gentle hum of the crowd isn’t in my ears, it doesn’t really get my juices flowing.

I think it also brings out the worst in supporters. We all begin to flatter ourselves that we’re equipped with the kind of expert scouting facilities (You Tube) that enable us to pass judgement on every potential signing. The complex intricacies of transfer negotiations are reduced to the stroke of a pen. “Sell him and him for £20m, buy him and him for £10m each, then Robert is your father’s brother. He who dares Rodders, he who dares.”

Even when a transfer is signed, sealed, delivered and sporting a cheesy grin on Arsenal.con I can’t wet my knickers with delirium. You can never forecast how a signing is going to turn out. We could unveil Lionel Messi tomorrow, but he might be exposed to kryptonite and lose all his powers, or else catch an acute case of Jose Reyes syndrome and cry for his mummy by next summer. Tomas Rosicky was a superstar, blockbuster signing and, through little fault of his own, that signing can hardly be said to have propelled the club to new plateaus in the last 5 years.

Well, that about wraps it up this week. It’s been an emotional season but I’ve still enjoyed it and I’ve particularly enjoyed the chance to have met some of you since I started this column. Hope to see you again at the qualifier in August. My summer holiday is Rubin Kazan, can’t wait. Right, I’m off to give Barry Ferguson’s hair a consolatory ruffle. Enjoy the Championship, cuntbiscuit. Up the Arse. LD.

Previous articleWin stuff with Pelé Sports and Arseblog
Next articlePaddy to return? + 89 remembered