Morning all, happy Friday. First let’s get this Puyol/Pique, picture of Cesc thing out of the way. 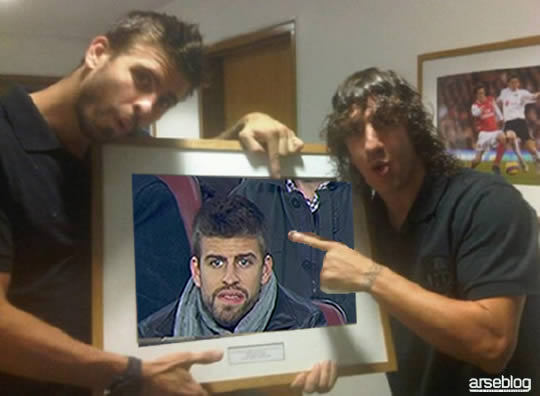 Crude I know but it does the job. Plus I didn’t have time to ‘shop in Cristiano Ronaldo taking a romantic walk with Shakira. Some may put it down to high-jinks, a pair of footballers having a bit of a laugh, but given the way Arsenal have helped Barcelona this week, opening our training ground and facilities to them, it showed a distinct lack of respect. Which is a shame really but there you go. Not a big deal really, at the end of the day, and it didn’t tell us much we didn’t already know.

Speaking of Cesc, AC Milan say he’s too expensive for them. Well, thanks for letting us know. And apparently we’ve signed two new Cescs from Barcelona but as they’re both 16 and unlikely to feature in first team action any time soon I’ll leave it to the bloggers who specialise in that kind of thing. At the moment I’m not even slightly interested.

The rumour mill is really cranking up this morning with agent of Falcao saying we’re interested in the player:

England are crazy about Falcao. Among the leading candidates are Arsenal and Tottenham. They are willing to hit the €30 million clause. The figure is not an extraordinary value for them.

Erm, I think he might be mixing us up with someone else if he thinks €30m isn’t an extraordinary figure. Has Arsene Wenger even spent €30m more than he’s taken in over the course of his Arsenal career? The most we’ve ever paid for a player is debatable, the Jose Antonio Reyes deal remains our record signing and even then I don’t think we paid full whack due to certain payments being dependent on performance/achievement and the player himself not phoning up Real Madrid all the time.

True story: Did you know the Reyes family filled their house with orange trees and covered the floors in dust just so they’d feel more at home. Honestly, they’d put the central heating on full blast and lie around in their underpants. No really, honest. For dinner they would all sit around gnawing on a leg of jamón serrano.

If Arsene Wenger paid €30m for a player I think I’d build some kind of shelter because it would surely be a sign of the impending apocalypse. The only way he’d pay that much is if he’d already arranged a deal with someone else to sell him for €50m, like some kind of footballing commodities trader. I call agent shenanigans on this one.

The Mirror report we’re after Lille duo (are they actually a duo, like Peters and Lee or Simon and Simon?) Eden Hazard and Gervinho. The young winger is highly rated by everyone who makes lists of transfers we should make but I guess it remains to be seen whether he’s ready to make the step up to the Premier League. As for Gervinho, I know nothing other than he’s going to bugger off in January for the ACN, so I’d prefer we signed someone who, you know, isn’t going to bugger off to the ACN.

Away from spurious transfer stories, England U21 boss Stuart Pearce has questioned why Arsenal didn’t do more to ensure Jack Wilshere was fit and ready for a meaningless summer tournament, saying:

One thing’s for sure – Arsenal have not left him out of the side in the last six weeks of the season, even though the stats have said he’s in the red zone. Arsène didn’t want him to go full stop. What he does with Arsenal next season is irrelevant to me.

Well, firstly Jack is an Arsenal player, paid by the club to play, and we have every right to play him. Secondly, if we didn’t play Jack injuries would have meant a lot more Denilson, and that’s not something anybody should have to endure. And apologies to Denilson fans but on Twitter yesterday the man from East Lower summed him beautifully when imagining the Anfield 89 game as played by today’s lot:

And it’s Denilson, charging through the midfield. He’s stopped, turned, given it back to Song.

Classic. Anyway, back on point. Pearce says that Wenger didn’t want him to go, which is absolutely right, however, at no point did the manager tell Wilshere he couldn’t go. Pearce knows that so he’s being a bit shifty there. And the final sentence sums up why everyone who had Wilshere’s best interests at heart felt he shouldn’t go away with the U21s this summer:

What he does with Arsenal next season is irrelevant to me.

Essentially Pearce has no interest in the consequences of a young man playing a summer tournament after a long season. No interest in what it might mean for the club who pay the player’s wages or for the well-being of the player himself. At the end of the day it was Jack who made his own mind up and I’m glad he made the right decision. Pearce can moan and bitch all he likes but he’s made his position very clear and it doesn’t reflect well on him at all.

Aaron Ramsey talks to Sky Sports, and I have to say this quote made me a bit sad:

If I look back I think I’ve been pretty happy with what I’ve done this season. I got myself back to match fitness and now another game will be good for me. Next season I hope I can get a good pre-season and start off the same as everybody else.

A whole season of his career wiped out, basically, because of that lumbering, window licking, hyperdrooling, mouth-breathing, self-fingering, puppy-squashing cuntbarrow Shawcross. And the Stoke fans booed him. Imagine. Anyway, hopefully the goal against United will be the platform on which he can build for the season to come.

And that’s about that for today. As I told you yesterday the end of season Arsecast will be available early next week, so apologies for leaving a gap in your Friday. That said, you’ll have to get used to it because the ‘cast goes into aestivation (summer equivalent of hibernation, you know. Thanks for my pedantic arseur for putting me straight on that) unless something drastic happens. Like spending €30m on one player, haha!

I think it’s safe to the say the sleep will mostly likely be uninterrupted. Finally, thanks to everyone who bought a print yesterday from the store. Your support is much appreciated and they’ll be in the post today.