Having drunk from the soothing elixir of victory (and Guinness) this weekend, the Gooner nation feels like a slightly lighter, breezier place this week. Facial muscles have relaxed, fists have unfurled themselves and the grey matter feels as though it has been lubricated. A bit like that feeling you get when you’ve had exactly 2 pints in the afternoon. Having had our palates neutered by a series of stodgy, flavourless draws and the dogshit kebab of last minute defeat last week, the taste of victory has been sweet. But when that victory comes over a team that features that über-cunny Patrice Evra, then that my friends, is all rich, steamy gravy with me.

There was some surprise to the starting line up with the injury to Cesc Fabregas. I have to be honest and say that my exact words when I saw the team emanate from the tunnel sans Cesc were, “Well, we’re definitely fucked now.” Last week Arsene made some pointed comments about the burden of the captaincy being “too much” for Fabregas this season. Many interpreted that as an admission that Cesc shouldn’t be skipper, but I saw it another way. I touched last week upon my belief that the team has been too prepared to sit back and let Cesc try and do absolutely everything when the chips have been down of late. Largely because he is a winner and he will take that burden on. I think Arsene’s comments were a veiled criticism of everyone else that hasn’t shown the same level of responsibility. 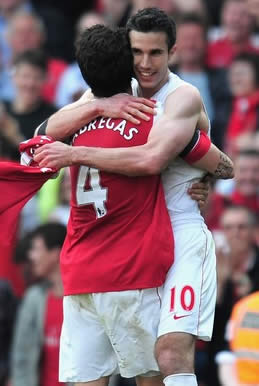 The only player that escapes that criticism is Robin van Persie – interestingly, mentioned by the manager in the same comment and therefore, you feel, mitigated as such. The issue with Cesc hasn’t been that he isn’t a leader; it’s that, along with Robin, he’s the only one we’ve got. Leadership isn’t just about mouth frothing and fist pumping. Besides which, because he picked up a trophy or two, Vieira is somehow now remembered as a snarling, teeth baring firebrand of a skipper. Yet I genuinely don’t remember him being like that and nor do his contemporaries, who all remark that he didn’t say a great deal as captain. The difference was, he didn’t have to. Vieira looked up and saw Bergkamp, Gilberto, Campbell, Henry, Ljungberg. That’s not a ship that needs too much marshaling.

Even the great Tony Adams was flanked by the likes of Bould, Winterburn, Seaman, Dixon and Smith. Cesc doesn’t have that kind of coercive network behind him and I’m disappointed to see him criticised for it. However, it seems that without him, the team rose to the boss’ implied challenge and stepped up to the plate. Maybe subconsciously they all knew they had to put more of a shift in.

What was interesting was that, whilst the shape of the midfield stayed the same, the dynamic was different. Typically this season, Song and Wilshere have swapped in the holding role. But against United, it was evident that Ramsey and Wilshere were swapping in the more advanced position and Song just sat, performing an excellent shackling job on gobshite Rooney. Wilshere got some joy from running at Vidic, who you occasionally feel would have made a decent scrum half and obviously Ramsey’s probing reaped the ultimate reward of the winning goal.

Whilst it is impossible not to be excited by the fact that that could be Arsenal’s midfield for the next ten years (indeed, the average age of the team on Sunday was 23.9, the youngest selected by any team in the Premier League this season) I have seen some suggestion that Sunday’s result was evidence that we no longer require Fabregas’ services. I have to say, I find such proclamations premature and well wide of the mark. One swallow doth not a summer make and all that.

When we won the league at Old Trafford in 2002, we secured the result that obtained the title without the injured Bergkamp and Henry and I didn’t see much clamour for their sales at that point. Plus, to dismiss Cesc’s role is to wilfully ignore the evidence of about 95% of our season that we scarcely get the creative platform of our game going without him. I think the questioning of Fabregas is really a sensitive and precious reaction to his admission that he gave Barcelona some thought last summer. It’s classic schoolboy stuff, “Fine, didn’t like you anyway!”

However, some of the feel good factor around the club has been somewhat diluted by the club’s official confirmation that ticket prices will rise 6.5% next season. Nobody likes to pay higher prices (though at the time of writing, 189 people “like” the announcement on the club website. Who are these people? Please get in touch and explain yourselves!), myself included. This brings my ticket close to the £2k mark at a time when I’m twelve months of the way into a three year salary freeze. The club might point to inflation rates, but most people’s salaries aren’t rising accordingly.

The club have put an awful lot of pressure on themselves to have a busy summer in the transfer market now, people’s backs are up and they’ll want to see some bang for their buck. Personally, I don’t think squad building is as simple as “spunk a load of cash on star names”, but a lot of paying punters do and that’s what they’ll want to see. Failure to act accordingly will see the atmosphere inside the stadium become even more hostile and negative. I’m not going to bitch and moan about prices too much, because the proof is in the pudding and I am going to swallow the price rise and renew – for all the posturing the only genuine avenue of protest is not to pay up.

But I do think this has been something of a PR foul up from the club. I’ve got it on decent authority that the club reconsidered the measure right up until the last minute, which suggests they realise that also. But having already hit Club Level members with the inflated costs, it would have been unfair not to mete it out across the board. It looks fairly obvious to me that the idea was cooked up back in January and February when we were going strong in all four competitions and looked nailed on to bag the Carling Cup at the very least. I think they possibly got a bit presumptuous and ahead of themselves on this occasion.

We’ve also seen images of next season’s new home kit, which I won’t talk too much about because, frankly, I don’t really care. So long as it’s red and white and doesn’t have a tonking great cockerel on the chest of it, I’m not really bothered and I’m aghast that so many get so het up about kit designs. I recognise them as part of the commercial strategy; they’re items of leisurewear and no more really. If you don’t like it, you don’t have to buy it. I stopped buying them years ago and the quality of my life, amazingly, is unaltered as a result. If you have children pestering you to buy them, do what my mum did. Tell them to get a bloody paper round and pay for it themselves.

A last point before I depart, it has been interesting to see some of Wojciech Szczesny’s comments on the official site this week with regards to the positive influence Jens Lehmann has exerted on him. Wenger himself affirmed that everybody has benefitted from having Jens around and I do wonder if maybe he’s being considered for a goalkeeper coaching role at the club. The manager also pointed to Jens’ experience and suggested it might inform his thinking in the transfer market this summer.

Now “project youth” ended some time ago, contrary to popular belief. Arsenal have signed only one player under 21 since the summer of 2006. (Ramsey, since you ask). Since then, our transfer policy has seen us sign more experienced campaigners, but we still do have a young side. The emergence of the likes of Wilshere, Djourou and Szczesny himself into bona fide first teamers this season has made it more so. Szczesny has spoken in glowing terms of having someone to look up to and learn from and you have to wonder if that’s in the Boss’ mind. (Though I wouldn’t necessarily suggest signing too many more 41 year old ex retirees!)

That’ll have to do for this week. Hopefully when I speak to you this time next week, our jaws will be dripping with the blood of Ryan Shawcross and Tony Pubis, as Arsenal smash those Stoke cunts 10-0 and we address the fallout of Shawcross having to sit out the Cup Final owing to multiple injuries sustained from Jens Lehmann’s teeth. Up the Arse. LD.

Thank you for the Cesc podcast feedback + Wednesday waffle