Good Friday to you all. Rather grey and miserable here which, I suppose, is as good a sign as any that summer has arrived. Hurrah!

Arsene’s press conference took place yesterday and, really, there was nothing out of the ordinary going on. Anyone looking for a revitalised, markedly different Arsene Wenger will have been disappointed. This was summed up by him being asked a question about whether or not the events of this season might see him change his philosophy. The journo-blokey had barely finished the question before Arsene answered with an emphatic ‘NO’.

The thing is, he could have been asking about Arsene’s policy with regard to wearing that big long coat which makes him look like an overly tall, decaying marshmallow or his policy in relation to re-signing older players. I mean, I think we all know what policy he meant but Arsene’s answer was so unequivocal that it didn’t speak of a man who felt he had to change much in the near future. You can find further discussion of that in today’s Arsecast.

More evidence that using Sam Cooke’s classic as our summer anthem would be a poor decision came when he was asked if he was going to add to his coaching staff this summer. There was a pause, then another ‘No’, as if such an idea was almost beyond the pale. It’s funny, this time last week we were expecting a new number 2 and perhaps some additions on the coaching front, to freshen things up, to provide some new ideas, and here we are now and none of that is going to happen.

Maybe Arsene’s ideas don’t need freshening up, maybe he just hasn’t had players good enough to implement his genius on the pitch, so given nothing else is going to change we have to hope that better players are recruited this summer. At this moment in time, however, we know little about who’s coming in, most of the speculation about players going out. Cesc, in particular, is a situation that will dominate and the manager said:

That’s a question I’ve heard already a few times in a press conference and I expect him to be here. I will fight very hard to keep him here. You have always to fight when you have a player of that quality, you must always fight to keep your players, of course.

Which, of course, is press conference fodder and gives us no real insight into what might happen. I have to say it was one of the least convincing, go through the motions, press conferences I’ve ever seen the manager give. Swatting away questions with bog-standard answers, and that’s fair enough. I’m not expecting him to open up and start being super-frank (puts me in mind a hero for the common that. Who fights councils over their increasing rates? Who will weed out the good plumbers from the bad? SUPER FRANK!), but the questions marks remain over many.

Although we are one question mark down as this morning comes the heartbreaking news that Denilson has decided to quit the club. He’s quoted in The Sun:

A footballer’s career is over very quickly so it is time for me to move on. This is not a sudden decision. I made up my mind eight months ago. I was fed up of coming home and feeling down.

I am a winner and I came here to win trophies but I’ve been here for five years and won nothing.

Now, I’m a humble blogger and do not claim to be an expert by any means (unless it is in rum based drinks). Perhaps there are many definitions of ‘winner’ but I would suggest that any player who is overtaken by a referee as he half-heartedly chases an opposition attack into his own half might be in danger of breaching the trades descriptions act there.

It’s no surprise that he’s off, to be honest. He’s been frozen out by the return of Ramsey, the emergence of Wilshere and the fact he’d rather have been somewhere else for the last eight months. From what I’m told he’s off to Spain, south or east has yet to be decided, but off he’ll go.

There are players I miss when they leave, this particular Brazilian won’t be one of them. It’s a shame that the potential he showed when he first arrived amounted to little but for me he’s the perfect example of the culture that has been allowed to develop at the club, high wages, players coasting and just too comfortable with the cosseted life at Arsenal. Moving him on is a positive development, in my opinion, and good luck to him wherever he goes. Wait till he looks back and realises just how green our grass is.

As for players coming in the boss is convinced we’ll have no problem in terms of attracting new blood:

If you speak about the quality of the club and the style of football we play we have many offers on the table for players who are desperate to join us.

I don’t think that was ever in question. Surely the majority of players in the Premier League, playing for clubs which exist consistently outside the top four, would like to join us. Maybe some of them are writing letters to the manager: 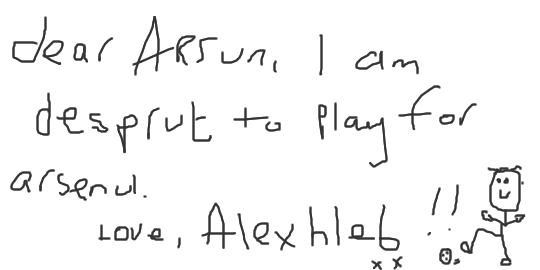 It’s about ensuring we get the right quality and experience in. The one vaguely interesting thing from the press conference was Arsene’s admission that we ‘lacked maturity’. Whether that’s reflected in his transfer business remains to be seen but from the many and varied whispers that fly around this time of year it might well be something he’s considering. We shall see.

Now, onto this week’s Arsecast and joining me to discuss the fun times since the last Arsecast is GilbertoSilver from Gunnerblog. Also in the mix Internet Joe, Arshavin and the usual waffle. It’s also a competitiontacular Arsecast, seeing as we’re coming to the end of the season, and I’ve got three pairs of football boots to give away from my friends at Pelé Sports. As well as that three t-shirts from the same source and three t-shirts from the Arseblog online store. So 9 prizes in all.

To enter, simply listen to the ‘cast and send the answer to the question to: [email protected]. There’s also a hint in there if you don’t know the answer straight off. Winners announced on next week’s show.

You can subscribe to the Arsecast on iTunes by clicking here. Or if you want to subscribe directly to the feed URL you can do so too. To download this week’s Arsecast directly – click here (24mb MP3) or you can listen directly below without leaving this very page.

And there you have it. The final weekend of the season is upon us so we’ll look ahead to the final game tomorrow and Sunday. Until then, enjoy your Friday.