I suppose it’s a measure of how little things have changed after Monday’s events that things seem to have gone back to normal already. At least in terms of news and coverage. Any changes are likely to wait until summer and even then, although I suspect some squad surgery, it’s hard to imagine anything incredibly drastic. That’s just not the Arsenal way. It doesn’t appear to be the Kroenke way either.

So, until then, we have to get ourselves ready for Sunday’s game against the nefarious Mugsmashers (and I suspect, having had reports of a couple of damaged *boilk* mugs, that many sorting office types and postmen are mugsmashers). The Telegraph reports that Wojscez©® will be back and ready to take his place in goal, which is good news, and, as reported yesterday, there’s an expectation that Johan Djourou will join him. On the pitch. Not in goal. Obviously.

Also in the Telegraph a report that we’re interested in Atletico Madrid goalkeeper David de Gea but it looks as if United have had a bid accepted and that will be pretty much that, I think. Their need is more pressing. Edwin van der Sar is retiring and none of their reserves have the same aura and potential as Wojscez©®. Where we need cover, perhaps, is further down the pecking order. Provided he’s happy to stay then Fabianski is a more than acceptable number 2 (tee hee) but beyond that, if injuries strike, we’re struggling.

Signing someone like de Gea would, in Arsene’s words, ‘kill’ Szczesney, and while there are certainly players we would like to see ‘killed’ with signings of experience and quality, he is not one of them. It’s worth remembering just how more assured everyone felt when he made his breakthrough into the team despite the fact he was just 19 and hadn’t played a league game for us before. He’s got it and provided he stays injury free he’s the number 1 for next season, in my opinion.

Meanwhile Gael Clichy has spoken about his future, saying:

I have to say that my present and my future is with Arsenal. I am leaving talks over my contract with my agent so that I can focus on my football. I know that there are rumours about me going elsewhere but I have nothing to say about that.

Which is fine but the reality is that if the club want to move him on then they will, regardless of what he wants. There’s just the sense that his career has hit a wall. The lapses of concentration, such as getting caught in possession against Blackpool, are now a feature of his game rather that the occasional blip. He’ll be 26 in the summer so the manager will have to decide if this was a period that many players go through before maturing properly in their peak years or if he feels this will be a feature of his game for seasons to come.

Denilson reckons we ought to sign Shaktar Donetsk winger, Willian. I heartily endorse this sentiment if only for the fact it would provide the headline: WILLIAN ARSE

Anyway, we’re getting way ahead of ourselves with talk of summer signings, there’s still a rather large chunk of this season to go yet. Behind the scenes, away from the razzle-dazzle of boardroom announcements, the players have been training hard and learning to drive on the right ahead of the club’s eventual move to Alberquerque.

As it is fairly quiet, I might point you in the direction of some other interesting reads. As always the ‘holic catches the mood of the last few days. There’s an interesting piece on Desi Gunner about fans and the way they react to certain statements. I make no comment as to the specific points he makes, merely throw it out there as part of a wider discourse.

And over on Three and in – Nobody got raped. One which might well spark a long overdue debate.

I know Jack Wilshere has reacted to the Man City story and pledged his future to the club but he might find it less time consuming in the future to not react to obvious bollocks every time it appears in newsprint. Hopefully from tomorrow the focus will turn well and truly to the weekend’s game and we can concentrate on that. 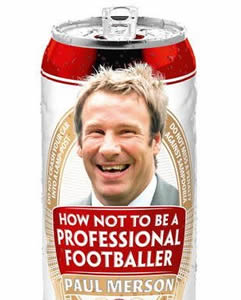 So, as it’s midweek and it’s been one full of trials and tribulations, how about a little competition? I’ve got two signed copies of Paul Merson’s autobiogprahy, ‘How not to be a professional footballer’ (Amazon link) to give away.

Some of the ‘Do nots’ include: DO NOT adopt ‘Champagne’ Charlie Nicholas as your mentor, DO NOT share a house with Gazza, DO NOT regularly place £30,000 bets at the bookie’s.

All fairly common sense ‘Do nots’, like ‘DO NOT punch a bear in the face’, they hate that, but pitfalls Merse fell into all the same. I don’t think he punched any bears though.

Anyway, to be in with a chance to win one of the signed copies, just answer the following question:

Which club did Paul Merson go to when he left Arsenal? Was it a) Aston Villa b) Middlesbrough or c) Portsmouth. Answers on a postcard, or by email if that’s easier, to [email protected]. Winners will be announced on Friday.

And that’s about that for today. It’s midweek, it’s rainy, the perfect day to go back to bed and pull the covers over your head. If only there wasn’t such a thing as real life.

Well, it’s probably good that there is such a thing as real life but sometimes it’s a bit lifey, if you see what I mean. If you don’t, I wouldn’t worry about it in the slightest.