I don’t want to dwell too much on the Blackburn game, I think we’ve all probably heard and said just about enough about it, likely none of what we have seen or heard has exactly been music to our ears nor honey for our tongues. Suffice to say I don’t think I’ve ever been so disappointed in the manner of an Arsenal display. Without United’s tails firmly up and a nice mathematical advantage accrued earlier in the day, it’s difficult to accept that Arsenal could have performed so listlessly. Most players had a fortnight away from the club to clear their heads and the late comeback against West Brom I thought, mistakenly as it turns out, would be a little fillip for them.

I’ve seen a lot of catch phrases strewn around the interweb in the various forum autopsies that have been performed. Phrases such as “lack of leadership”, “winning mentality” and my personal favourite by-word for all of us armchair managers, “tactics” have been tossed around like confetti, carried on acid tongues over the nearby border into cliché country. The chief frustration for those of us that torture ourselves with the whys and wherefores of Arsenal’s annual spring capitulation is that really, none of us know why it happens.

That’s why we offer the catchphrases mentioned above; barking them out like Mr. Chips on an amphetamine binge. Because they’re ultimately substance-less, empty expressions that conceal our bafflement and make us feel a little better about our collective ignorance. When you prod beneath the articulate veneer, nobody is entirely sure what they even mean in specific terms, much less how we go about rectifying them.

They’re totally unquantifiable, immeasurable and therefore impossible to disprove. On the off chance that a day comes when we don’t explode like rat bags when the clocks go forward, we can turn around and say, “See, it’s because we’ve got mental strength and leadership now.”

I’m going to branch out into the realms of marginal theory and suggest we clearly do have a squad that can win big honours. You simply do not get into the title race in April if you haven’t got the talent and the application to win the big prizes. I know there is a great discourse regarding the usefulness of our squad players, but I would invite you to take an afternoon stroll to a Manchester United forum and cast your eyes over what they think of Darron Gibson, Wes Brown, Jonny Evans, Michael Owen and Gabriel Obertan. Many have put forward a case for all sorts of transfer market purchases, but a strapping defensive midfielder, commanding beastman of a centre half or a new keeper wouldn’t have won us the games against Sunderland or Blackburn.

Truth is, I don’t think it’s as simple as a little transfer market tweaking or one or two more players clapping their hands and baring their teeth. For one thing, Arsene’s austerity in the transfer market is well overplayed, recent buys have included the likes of Arshavin, Nasri, Vermaelen, Squillaci, Chamakh. All experienced, with the exception of Chamakh, none of them on the cheap. We know the manager bid big for Reina and Felipe Melo in recent summers. We have only bought one first team player under the age of 21 since 2006 and that was Aaron Ramsey. The youth policy in the transfer market finished years ago, augmented now by an internal, organic youth policy that has seen Szczesny, Djourou and Wilshere deservedly become first choice players this season. The manager isn’t afraid to spend money, despite the reels of tabloid gunk you read that suggest otherwise and the emergence of the three aforementioned young foot soldiers suggests the seeds of the youth policy, planted out of necessity back in 2005, are still flowering nicely.

Arsene’s reflections after the Blackburn match were those of a weary man let down by his players. He usually cossets and protects, but he seemed in no mood to once again be the voodoo doll for another limp performance. We may well copy and paste those same buzzwords into the comments sections again, but really they don’t add up to much – either as advice, or as a plan of action. We don’t honestly know why the team cannot seem to make that last 5% jump into greatness and I don’t think the manager’s cracked it yet either.

You can call my faith misguided if you must, but I still think he will get there eventually though. We tend to think cycles of dominance last forever, but football is a lot more transient than that. Since the beginning of the Premiership era, clubs such as Norwich, Nottingham Forest, Blackburn, Aston Villa and even Liverpool have disappeared from the top end of the top league chasing pots of gold and chopping and changing managers and players in the hope of keeping hold of the vine. But the mark of a top club is to keep competing year on year and we have the resources and the personnel to do that.

Meanwhile, the Player of the Year nominations have been leaked and as usual, it’s caused a bit of a bitch-fest. It would appear that our own Samir Nasri is on the shortlist for the main award, whilst Jack Wilshere is nominated for the Young Player award. Ructions have been caused by the omission of Nani, or this player, that player or the other. Personally, I think Nasri’s form is contingent on Cesc being in the side and believe Djourou might have been a better bet as far as a Gooner representative, whilst Vincent Kompany’s admission confirms exactly why these awards are nothing to get worked up about. It’s total window dressing, even the players’ nominations are as malleable to media affectation as the supporters’. These awards are usually shorthand for “which player has the most lucrative boot deal/ fittest missus/ the most hype behind them.” The concept is nonsense anyway, how can one objectively measure the job Joe Hart, a goalkeeper, has done, with that of the monkey boy Bale, a left winger. Superficial tripe. 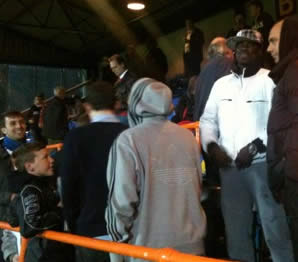 For a final word I went along to watch the Reserves play Sunderland at Underhill on Tuesday night and was pleasantly surprised to see one Emmanuel Eboue, inconspicuously decked out in ice white Felix the Cat bomber jacket, sitting amongst the supporters at Barnet. I’m not hugely taken by all this “cult of Eboue” shit. I think those that ironically fete him are probably those attempting to mask their guilt for having massacred him in that infamous Wigan match.

Plus, Eboue has been utter gash in just about every game he’s played this season. It’s difficult to think that this time last year he was sharing that right back spot with Sagna due to his attacking prowess. Sagna’s response to that, compared with Eboue’s this season have been diametrically opposed. However, I have to afford the guy huge credit. He sat happily amongst the supporters, posed for every photo, signed every piece of paper thrust in front of him without a flicker of a po face. I rather expected him to slip out before the end to avoid being swamped by the masses, but he filed out shortly after full time and was again happy to mingle. Full respect for that.

That just about wraps it up this week, there’s Blackpool to look forward to this weekend. Me and mine are heading up on Saturday morning for a great, big, sleazy, debaucherous, booze fuelled cliché of a build up to the match on Sunday. Hope to see some of you there. Up the Arse. LD.