If I were an animal this morning I would be a shark. Not killer shark like a Great White or a Hammerhead, despite how handy that would be if you needed to bang in a few nails in your secret underwater lair, but a Basking Shark. 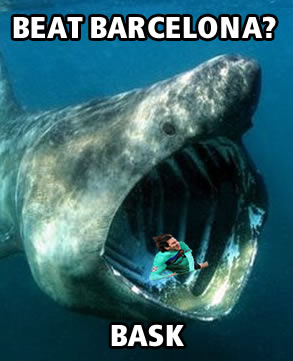 In the wake of the Barcelona victory I am basking. Go the shops? No, bask. Make important phone call? No, bask. Do something mean? Be basktard. Sleep? No, bask. Wait. Sleeping is like really comfortable basking. I can do that. And I think most fans should be basking also. Basking until they can’t bask no more and until the word bask seems meaningless from repetition.

And while the players will definitely have enjoyed it they can’t bask. They remain focused on the job at hand even though the job is a few weeks away yet. Jack Wilshere managed to nab the shirts of both Xavi and Iniesta and he’s a young man on top of the world right now, saying:

However, he knows there’s still work to do:

But there is still a job to do. We want to see it through at the Nou Camp. We have to get a goal early and then let them come at us again.

While the captain says:

We are happy because it’s not every day you beat the best team in history but it’s not finished by any means. We know we have to go to a very tough stadium and it will be very difficult. A weight off your shoulders comes after both games not just one.

Which is just the attitude the players need to have while we make like that shark. Interestingly, Nicklas Bendtner reckons he spotted Barcelona tiring as he was warming up and perhaps it’s no coincidence that in both games at the Grove we’ve had the better of the last 15-20 mins. How often do Barcelona take just a one goal lead into that time period? How many teams are beaten by then allowing them to take the foot off the pedal a bit? Good questions, and ones to which I have no answer, but it’s worth having a dig around.

Update: They have been two goals to the good going into the final 15 minutes 23 times in 40 matches this season – via @orbinho

The return leg is going to be some game. Barcelona remain confident, as you would expect. They score an average of 50 goals per game at home and we haven’t kept a clean sheet away in Europe since the days of Archduke Ferdinand so I suspect it’s going to be open and attractive. We won’t have great memories of last season and that Messi bloke, flat track bully that he is, seems to like scoring at home. Anyway, we’ve got plenty of time to think about that game.

And anyway, if the Arsenal players need a bit of motivation for the return leg, Xavi’s rather ungracious sounding comment might do the trick:

This isn’t a major slip-up, it’s a footballing accident, that’s all

I’m sure he meant it in a way that would rev up his teammates but it does sound a bit dismissive. If we’d scored a goal which deflected in off Abidal’s arse and then bundled one over from a corner he might have more of a point. Instead we scored two very, very good goals. Those were not accidents. So while Xavi’s comments might not be the archetypal stick up on the dressing room wall ‘they’re shit’ stuff, it’d still be no harm for the team to be aware of them.

In the meantime there is a lot of football to be played and important football too. Sunday sees us play Leyton Orient in the FA Cup while midweek there’s a game against our favourite rugby bumpkins and our old pal Lennie. I think there will be a significant number of changes for Sunday. In fact, if you’re going I’d bring a pair of boots and ask Arsene if there’s any chance of a game, you never know.

Johan Djourou is out with a back problem but I suspect this is as precautionary as a bastard. I don’t think he would have played anyway with the Stoke game, followed by the Carling Cup final, weighing heavily on the agenda, but if there’s any little worry about him then rest him up. Apart from that Bacary Sagna returns having missed Barcelona through suspension. There’s a small worry over Theo’s hammy but he should be ok.

It’s too early to go through possible team permutations but you know the players who are going to come in and hopefully they can do the job. I quite fancy Rosicky for a goal, you know. You can get a bazillion to one with William Chandler or whatever his name is. Worth a shifty quid, I reckon.

Right, time then for this week’s Arsecast. And joining me to bask is Amy Lawrence. On the agenda the Barcelona game, what it means, Jack Wilshere and the way the team are playing right now. Also in there some vintage news, Arshavin and more.

You can subscribe to the Arsecast on iTunes by clicking here. Or if you want to subscribe directly to the feed URL you can do so too. To download this week’s Arsecast directly – click here (22mb MP3) or you can listen directly below without leaving this very page.

And that’s just about that for today. A quick heads-up, if you fancy going to the Stoke game on Wednesday but don’t yet have tickets, check back around lunchtime today for details of a competition in which you can win a pair of socks.

No, wait. A pair of tickets for the game. That’s much more like it. If I had Arseblog socks I’d throw in a pair as well but I don’t. Not yet anyway but fear not, a range of fashionable Arseblog branded undergarments is probably coming your way soon. Hey, if the demand is there …

Right, I’d better get back to my basking. Have yourselves a good Friday.