Morning all, another day, another step closer to our next game and one further away from Saturday’s madness.

As has been quite typical this season we’ve been bailed out somewhat by those around us. Chelsea’s £75m looked money ill-spent yesterday, at least, as Liverpool beat them 1-0 and United’s 2-1 defeat to Wolves means that the damage done much less than it might have been.

If the Arsenal players feel that they’ve kinda got out of jail a little bit it’s because they have. Two different results in those games would leave us feeling a lot, lot worse this morning. That we’ve made gains after what went on is remarkable really and hopefully it eases the blow a little bit for the players. The manager spoke about his fear of psychological damage but already they’re making the right noises.

We are terribly disappointed with what happened out there today and the way it happened. We’re gutted really. But there’s the international break now so maybe we’ll quickly forget what happened and pick ourselves up for the next game.

There is no breakdown. We have no right to afford it. If we want to win, we shouldn’t cry, we have to analyze this failure and draw the right conclusions. This day is already over. Now we have to think about and prepare for the next game in the Championship.

I suppose some will dwell on it longer than others, some will feel more culpable, and there’s nothing wrong with some introspection and analysis. What’s important, however, is that the team reacts properly. We’ve got 13 league games to go and a lot of points to play for. As Arshavin says this is no time to feel sorry for ourselves. It might crazy but we should do our best to consign the day to history and if there’s any embarrassment at our unique place in the record books then channel that into our upcoming performances.

While Saturday may not have been unique in terms of Arsenal chucking away the kind of lead that no Premier League team should, I think we have to look at the game as a freak. Imagine it as the child of Carlos Tevez, Joleon Lescott, Dirk Kuyt and Iain Dowie, birthed by a monstrous hag. A 90 minute mutant that lives in the attic and that you can scarcely bring yourself to look at, let alone feed. Eventually, if you ignore it long enough and get on with the things you do best, it’ll starve to death until one day you go to get something and you come across a skeleton and a door hatch with lots of scratch marks on it. You have moved on.

Our ability to do that is important but will be impacted by the injuries and suspensions. Obviously there’s a lot of worry around Johan Djourou and the history with his knee would make you fear the worst. As yet, however, there’s nothing official so we’ll have to wait and see what happens there. If it is serious I wouldn’t be surprised to see Thomas Vermaelen’s comeback brought forward.

In the meantime though Squiscielny need to find a way to work together. They have been our least effective central-defensive pairing this season but if they’re all we’ve got for a few weeks then we’ve got to hope they can discover a common language beyond their mother tongue. It’s a big test for Squillaci, really. He’s experienced enough to know where things are going wrong and he needs to stand up and be counted now. His form is poor, there’s no denying that, but I think he’s a better player than he’s shown in recent weeks. Let’s hope he can work his way out of the slump he’s in.

In other news – well, there is no other news. If you consider a deleted Tweet by Jack Wilshere news then fair enough. I did say on Saturday evening I hoped the manager had a word and told the players not to mouth off online. About ten minutes later there was Jack’s message. Ooops.

Personally, I think we should never, ever speak about referees again, in good moments or, more inevitably, in bad. Ok, Wojscez did it with typical good humour on his Twitter but I liked Wenger’s post-match interview where he went all Vicomte de Valmont when asked about the ref. “My opinion is not important” is the new “It is beyond my control“.

Also, if you want to see what the Arsenal players are up to on Twitter without having to use Twitter yourselves, you can follow them on this Arseblog page.

Finally, I can exclusively reveal there really is something to these reports which stem from French TV. Interpol are taking it all very seriously indeed and have put their best detective on the case. 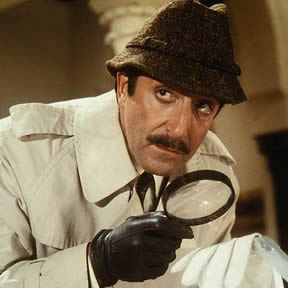 Report of a ‘berm’ on the Arsenal coach are, however, wide of the mark. Till tomorrow.