You know, we could be sitting here this morning in the midst of a massive, massive argument. Was Saha offside? Does the fact Koscielny take a touch play him onside? Do any of us know the offside rule? What precisely makes anyone think Lee Mason is a referee? 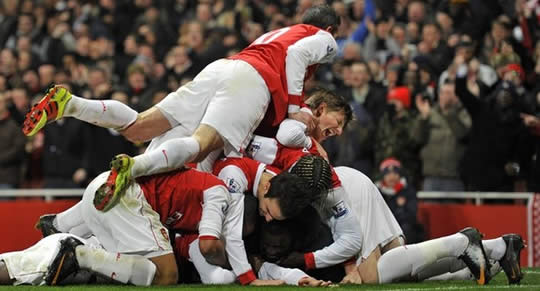 The fact is Arsenal made Saha’s goal an irrelevance. A second half fightback saw us score two and take all three points so whatever interpretation of the offside law you might have it just doesn’t matter. There’s no doubt the goal incensed the players, the manager and the fans. Saha was more offside than a pack of starving Adebayors when Seamus Coleman played the ball. Laurent Koscielny tried to clear and it deflected into the Frenchman’s path. His finish was excellent but for me he was offside.

There are just too many vague areas regarding the offside rule. The interfering with play one, for example, was an issue during the Villa game when Fabianski was unsighted because an offside John Carew was stood right in front of him. Whatever about Koscielny’s touch and the implications of it, surely the fact Saha was offside when the ball was played is enough? Lee Mason and his assistant saw it differently and gave the goal. Arsenal were unhappy, as you would expect any team to be if they conceded like that, and it looked for a while like we were really losing our heads.

Half-time arrived and gave us a chance to sort things out. Sometimes there’s nothing like a bit of injustice or righteous indignation to fire you up and that’s what the goal did to Arsenal. We channeled the anger into our performance and used that as extra motivation.

Lee Mason continued to help by calling us back for free kicks when we might have been allowed play advantage and there was a niggly undercurrent to the game. Everton know well enough that if you let Arsenal play then you make life more difficult. So they spoiled a bit, fouls that prevented Arsenal working a rhythm and fouls that broke down moves at vital times. Ok, I can live with it. That’s to be expected. What I don’t understand is after the game when some fans complain that we gave a bit back.

If they’re going to kick us then fuck them, we’ll kick them back. So there were plenty of yellow cards and I was surprised the game finished 11 v 11, to be honest. When Jack Wilshere gets a yellow after five minutes for a foul on Arteta you kind of expect the worst. And look, here’s the thing, I’ve got no problem with anyone kicking Arteta. I think he’s a great little player but the incident with van Persie shows why he needs a bit dished out. Lying prone on the floor after a van Persie challenge which saw Robin booked, he was up on his feet in a flash when the Dutchman tried to pull his arm. He was spoofing. Entirely his prerogative, of course, but don’t expect not to be kicked when you do that. It’s the same way I can fully understand any opposition player kicking Eboue.

Andrei Arshavin came on to replace Tomas Rosicky and it was the Russian who got the equaliser. Jack Rodwell could only head Cesc’s chipped through-ball back towards his own goal, Arshavin anticipated, waited for it to drop and side-footed home nicely on the volley. Coming after the two assists against Ipswich, and the decent enough display against Huddersfield, the goal is hopefully another step on the road to ‘recovery’. In the absence of Nasri we need him to be more like the Arshavin of old so fingers crossed that’s what we’re seeing.

Five minutes later we got the winner. Robin van Persie’s corner from our right found an entirely unmarked Laurent Koscielny who got his second goal in three games with a tidy header into the bottom corner. To be fair our corners had been quite threatening all night, almost as if we’d been working on them in training, and the delivery and finish this time were spot on.

Everton came back at us a bit, forcing corners and lumping some long balls into the box, but we defended stoutly and bravely. Bacary Sagna got clobbered a couple of times making sure we kept the lead intact but that’s what you’ve got to do. Everton didn’t have a clear cut chance though and after five long minutes of injury time Lee Mason did one thing right at last and blew for full-time.

I would say it was more a victory of a team with fantastic spirit and a never-say-die attitude than our usual game. But that of course is needed in a competition like that. We played our tenth game today in one month and every time we have shown, even when football-wise our level dropped a little bit, we have always shown fantastic attitude.

I was impressed by the reaction to the first half. There was the very real danger that Arsenal might sulk and use the injustice as an excuse. Instead they used it to fire themselves up and make sure they got the three points that were so important. United won last night, Chelsea won last night, there is no margin for error at the moment and that’s what makes fight-backs like that all the more enjoyable.

Did we push our luck a little bit? Perhaps. I read criticism of Cesc (from Arsenal fans!) and Robin van Persie, the suggestion being that they might have talked/tackled themselves into trouble, but this is top level football. Mr Nice Guy is all well and good when the time is right but sometimes you need to be a bit of a cunt to make sure you win games. This is not a popularity contest and frankly I could not care less what other people think of our players. I care that they care about winning, that they realise winning is the only thing that matters during that 90 minutes, and I care that we’ve got players who will do what it takes to win.

So Cesc might talk to referees a bit much. Well, so did Tony Adams and I never heard anyone complain about that. So did Roy Keane and while I heard plenty of complaints from this side of the fence about his talking if you said it to him he’d hold up his medals and tell you, rightly, to fuck off. Yes, you need to know where to draw the line but I don’t think Cesc overstepped the mark in any way and it’s just funny that people bemoan the lack of leadership on one hand yet criticise when the captain is scrapping for his team.

As for David Moyes post-match comments, well, they’re just pathetic. Have a look at the video where he suggests, entirely unprompted, that Cesc should have been sent off for comments he made about the referee. It’s classic stuff, beaten manager wants to deflect focus away from his own team’s failure by making an issue about something else. I mean, if you’re going to bring something like that up at least have the balls to go all the way with it. Moyes has just made himself the new Phil Brown, less orange perhaps, but equally shifty. What’s even more interesting is Arsene Wenger saying Cesc did not speak to the referee at all.

And here’s the thing: IF Cesc said something about the referee that was worthy of a red card then Moyes should direct his anger at Lee Mason for not showing the red card, not at Cesc. Are we really supposed to believe that a man who has been in football as long as Moyes hasn’t heard the same thing countless times from his players after a contentious decision? That somehow what Cesc said was so shocking he had to bring it up on television afterwards? My hole. As I said, he’s trying to take the attention away from the fact his team blew a lead and lost the game. And let he who is without sin, and all that.

The other thing is that it shouldn’t be the talking point of the night. At least not from an Arsenal point of view. What we should be talking about is the spirit and quality of the fightback, the fact that we went behind and came back to win for only the second time this season, and that the three points keeps us very much in the fight for the league title. The team showed real character last night and that’s what we should be focusing on.

We’ve got a few days rest before we make a Saturday afternoon trip to Newcastle. It seems as if we picked up a few knocks last night. Alex Song collided with Wojscez©® and probably has a dead leg, while Theo picked up an ankle injury after one of Fellaini’s late, oh-look-the-ball-has-gone, tackles, so we’ll see if they make the trip.

Finally, apologies for issues with the site last night. The hosting company have been about as helpful as dog covered in hippo’s snot so I’m not quite sure what the problem was. The live blog server worked fine, the main site was troubled. Will try get to the bottom of it asap and sorry again.

Clips etc on the video page.

Right, that’s that for today. Have a good one.

Previous articleArsenal v Everton – live blog!
Next articleDear Cesc, keep it up. That is all.