So the champagne remains on ice, the celebrations on hold and the wait for a trophy continues. There’s also the joyous revelation this morning that the media stories about time since our last success can now be gilded with comments about we lost a final to little old Birmingham.

Honestly, the way Sky were talking yesterday about Birmingham being such underdogs you’d swear we were playing a non-league side and not a Premier League one that has beaten Chelsea this season. Not that they’ll care about what Sky said yesterday and congratulations to them for winning the cup.

From an Arsenal point of view it’s hard to look at the performance and rank it anywhere near our best this season. Not the worst either but when the time came we couldn’t raise our game to the level we know we’re capable of. Some of that was down to the way Birmingham played, they worked hard and defended very well. They got ten men behind the ball at all times when we had it and on a day when we lacked a bit of spark that was always going to make life difficult for us. And as much as Birmingham played well we were leggy and careless, not a good day to have one of those days.

We started poorly and got lucky when Bowyer was played through but given offside. Wojscez took him down but with the offside flag up the result was a free kick to us, instead of a penalty to them and a red card for our keeper. The defensive solidity we’ve enjoyed over the last little while wasn’t really obvious as we struggled to cope with Zigic. Time and again Birmingham hit him with the long ball and when you’ve got the best part of a foot on your opponent you’re always going to win more headers.

In possession we were careless, giving the ball away too easily, and the first goal came after a mix-up between Sagna and Wilshere gave the ball back to them. A cross to Zigic was cut out by Koscielny for a corner, and from the subsequent set-piece Zigic headed home from close range after they won the initial ball. Shortly afterwards it really should have been two, Gardener was stopped on the edge of the box, the ball rebounded to Zigic who was clean through and denied only by a Wojscez©® save and the fact he had to use his feet.

It was bit of a wake-up call and Jack Wilshere drove us forward from midfield, cracking the bar with a shot. When it rebounded to Arshavin he skinned the defender, crossed back into the area and van Persie, moving away from goal, swiveled and fired home with his right foot to make it 1-1. A brilliant finish but a costly one. He injured himself scoring the goal, it looks like a knee problem and the prognosis is ‘not good’ according to Arsene Wenger.

Still, it gave us the chance to go in and regroup at half-time, to pick ourselves up and lift our game a bit. The initial signs were good, Rosicky firing just wide after a decent move down the right hand side, but we just didn’t get going fully. Fahey hit the inside of the post for Birmingham after a fortuitous rebound off Zigic. We made changes. RVP came off due to his injury replaced by Bendtner, Arshavin, who was clearly spent and had nothing left in his legs, made way for Chamakh.

And I suppose that brought about our best spell of the game. Some tired legs meant the game opened up a bit and Foster made a string of saves from Arsenal players. We certainly looked the most likely to score at that point but then, with just a minute of normal time to go the unbelievable cock-up between Koscielny and Wojscez©® that handed Birmingham the cup. A free kick was headed on by Zigic, there was no danger at all, it just needed one of them to deal with it. Instead Koscielny’s miskick, perhaps having heard a shout from the keeper, meant the ball squirted into the path of Obafemi Martins and he had the simplest of tap-ins to make it 2-1. 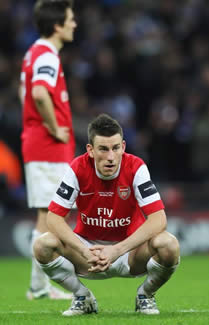 We don’t know what kind of communication went on between keeper and defender but for me, once Koscielny has come that far, he’s got deal with it and just lump it into the stands. I don’t want to be harsh on the bloke, he’s had some excellent games recently and there’ll be nobody more upset about what happened than him, but it’s a very harsh lesson to learn. And whichever Birmingham player slapped him on the head after the goal really is a snide cunt. Celebrate, by all means, but there’s no need to do that.

Anyway, it was a ridiculous way to lose a game and I doubt there’s another team in the world who could conspire to lose a final that way. I don’t really buy the people who say they deserved to win the cup. I think the stats show we had twice as many attempts on goal, twice as many on target, and it was only a ludicrous freak of a goal which won it for them, but the only stat that counts is the scoreline and we’re on the wrong end of that.

Obviously losing a cup final hurts, we’ve been there before and we’ll be there again, and it will raise many questions about the team and it’s ability to make that next step. Rightly enough people will debate the issue. Is there a mental weakness? Birmingham are a team we’ve beaten twice already this season. Did they want it more than us? I don’t think so. We just didn’t play well on the day. Do they care enough? Of course they care.

We’ve spoken a lot about the team’s maturity and their development this season. Winning yesterday would have calmed many fears, washed away many doubts. Losing does nothing but heighten those and I understand that completely. Losing can become a habit as much as winning. Sport is littered with examples of teams and players who, when it comes to the final hurdle, just can’t get over it. A sliced drive into the trees on the 18th, a bad race in an Olympic final, unforced errors with a grand slam in sight, and at the moment we’re one of those examples.

Afterwards Arsene described the team as ‘bitterly disappointed’ and Koscielny and Wojscez©® as ‘destroyed’. The keeper and the defender will have had a sleepless night, I’m sure, replaying that incident over and over again. The team as a whole knew they had something to prove yesterday but the monkey remains attached firmly to our back, it’s balls un-kicked. Fucking monkey cunt.

And yet, without trying to gloss over the hurt and disappointment of yesterday, we still have much to play for this season. The maturity of the team might be measured in their response to this. We can do two things – we can sit around, feel sorry for ourselves that we lost a final in freakish circumstances, or we can pick ourselves up, dust ourselves down and keep fighting. And there’s only one option, isn’t there?

The fallout will continue as fans rightly discuss the issues that losing yesterday brings up, but the team don’t have any other choice than to just keep going. We play again on Wednesday, then Saturday, then it’s Barcelona, and so it goes until the end of the season. In the past setbacks have become excuses, any psychological blow becomes a major issue, the team requiring a metaphorical straight-jacket and padded cell, but no matter how much they hurt over this, and they do hurt you know, they’ve got to realise there’s still a lot of football to be played this season.

I’m not trying to make any excuses for them. They had a brilliant chance to silence the doubters and cocked it up in spectacular style. Unfortunately that’s football. Swindon 69, Ipswich 78, West Ham 80, Luton 88, Arsenal teams in the past have blown cup finals against teams they ‘should’ have beaten. Arsenal teams in the future will do the same. Underdogs will win finals. Ask United, Sp*rs, Liverpool. It’s part and parcel of the game. Of course it raises issues about mentality and belief, the ability to deliver when the time comes, but I’m not going to sit here this morning and castigate the team.

They know as well as anyone what they’ve allowed slip, and the repercussions of it, but they simply cannot let it affect them negatively. I don’t want to be trite and suggest they turn the negative into a positive. It’s too much like woo-speak bollocks but the reality of our situation is that we still have three chances to win a trophy this season and we have to regroup, refocus and quickly. Although worried about the damage it will do to the team’s confidence Arsene Wenger says:

It is a massive disappointment for the team but we have massive challenges in front of us – the Carling Cup is four games, five games but a championship season is 38. We will not throw 38 games away because of one game.

Let’s hope that’s the case. The faith in the team is shaken this morning, no doubt about it. The only way to regain that is through performances and results. There’s not much else we can do now but consign this to history, painful history I fully agree, and move on. Whatever does’t kill you and all that.